Brace yourself for this one people.

When a film crew ventures up to an isolated mountain cabin to shoot an adult film production comes to a hault when it’s star, Ron Jeremy (as himself), is hit by a shooting star and that world famous part of his body becomes possessed by a nasty alien bent on world domination. The massive appendage detaches itself from Ron’s body, attacking and killing the crew one by one. Yep.

To get it out of the way, One-Eyed Monster looks like garbage. Clearly shot on a dirt-cheap budget that would be jealous of a Troma movie, the effects are the height of cheesy CGI and the movie really drags in the first act. But once the plot kicks in, Monster becomes the kind of outrageously imaginative bawdy comedy you’d normally only get from South Park. When I saw the summery I had to see how they could pull it off and, dammit, against all odds they do. Monster takes a premise that would seem to be unspeakable and unfilmable and mines it for all it’s worth 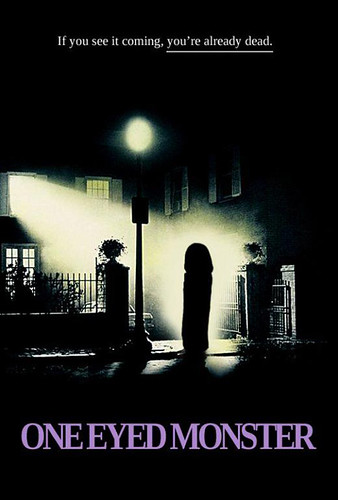 There are a lot of really bad horror/comedies out there. Low budget parodies that aren’t a fraction as clever as they think they are. Forgiving the technical shortcomings will be to your benefit here and the only way to appreciate this small but clever and truly funny little gem. It is totally filthy and yet doesn’t become tasteless overkill. Whether you love it, like me, or just barely survive it, One-Eyed Monster is one of those novelty movies you’re guaranteed to talk about the next day.