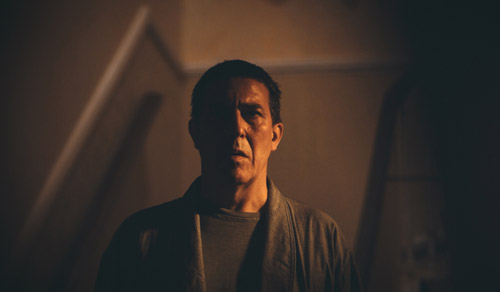 Ghosts and romance serve as the backdrop for the Irish film, The Eclipse, directed by Conor McPherson.

McPherson also co-wrote the screenplay with fellow Irishman Billy Roche. The Eclipse is loosely based on a short story written by Roche from his 2006 collection of short stories called Tales from Rainwater Pond.

Conor McPherson is an accomplished playwright. His plays have won awards in Europe and he has been nominated for 2 Tony awards.

The Eclipse was a big hit in Ireland. It won 3 Irish film awards including Best Film and it was nominated for another 5 awards.

Michael Farr (Ciaran Hinds, Race to Witch Mountain) is a single father raising a 14 year old daughter and a 10 year old son. After 3 years, Michael is still coping with the death of his wife. He is a wood working teacher, who had dreams of being a writer.

Recently, Michael has been hearing strange sounds at night. He has also been having nightmares and frightening visions. On more than one occasion, Michael has sworn that he has seen a ghost.

Every year, Michael volunteers for a local literary festival that attracts many top writers. This year, Michael meets a beautiful ghost story writer named Lena Morelle (Iben Hjejle, Defiance). Due to what has been going on in his life lately, Michael feels an almost instant connection to Lena and she eventually feels the same.

Standing in Michael and Lena’s way of true romance is best selling author and pompous jerk Nicholas Holden (Aidan Quinn). In public, Nicholas seems like he has it all, but his private life is a wreck. He wants Lena for himself and he has a difficult time taking no for an answer.

The Eclipse does a pretty good job of blending romance with horror. However, it would have been an even better movie if McPherson would have concentrated more on the horror and less on the romance. There were a couple of scenes when Michael thinks he sees a ghost that will really make you jump out of your seat or cover your eyes or both.

The flowing camera work of Ivan McCullough and the haunting music of Philip Begley really add to the aesthetics of the film.

Ciaran Hinds and Aidan Quinn both give wonderful performances. Hinds is fantastic as a man that is still greiving for his deceased wife, while being attracted to a new woman and being tormented by horrifying images every night that look like they come right out of a Stephen King novel.

Quinn is superb as a man that appears very successful, but in reality is a complete loser. Nicholas accuses Michael of stalking Lena, but he is the one leaving Lena several peculiar messages on her cell phone and he is the one showing up at night at Lena’s home unannounced and drunk and he is the one who starts a fist fight with Michael.  So, who do you think is the stalker?

If you’re in the mood for some scares like The Sixth Sense sprinkled with a little Ghost tenderness, then The Eclipse is for you.

The Eclipse is now available on DVD.