The Holy Grail, The Fountain of Youth, The Ring of Power: they all lend gravitas to a quest. Of course they are only (as Hitchcock called them) MacGuffins serving to propel the story forward, but such objects are imbued with a rich history (real or imagined) of intrigue, conspiracy, betrayal, honor and duty.

In Day Watch, Russian director Timur Bekmambetov’s sequel to the crossover success Night Watch, the constantly down-on-his-luck hero Anton Gorodensky must locate the Chalk of Destiny to rewrite his fate.

This is a fantasy story, so the lines of believability are inherently being stretched from the outset. But with such a cornball quest item, it’s hard to take this film entirely seriously. Fortunately, there was a prequel, so the audience can recognize that the Chalk of Destiny is nothing more than a plot device and move on.

Director Bekmambetov tackles Day Watch, the middle film in his on-going sci-fi/fantasy trilogy, with all the tricks in his bag: fast-cuts, slow motion, CG effects, close-ups, zooms, explosions, etc., etc. With all of the visual stimulation, it’s no surprise that even given the cultural hurdle for North American audiences viewing this very Russian film, it’s still hard to follow.

Part of the problem is that the action sequences, and even the larger plot as a whole, don’t follow logically. In one cut we see Anton in a crowded room full of warriors and literally in the next cut we see him making his way down an abandoned hallway without another soul in sight. But this incongruous sequencing actually lends itself to viewing the film not as a strict narrative, but as more of an abstract film. Instead of comparing this to the Matrix films, as is popular, it might be more apt to compare this to a David Lynch film or an early-to-mid Cronenberg.

For all of the cutting edge sci-fi elements and cheesy plot points, the film still manages a wry, quirky sense of humor, highlighted among other places at the beginning of the end credits as the filmmakers names appear on billboards and other city signage. It also features some solid performances from it’s cast, most notably Valeri Zolotukhin as a vampire butcher who goes to great lengths to protect his son.

If you enjoyed Night Watch, you’ll definitely want to follow the adventures of Anton Gorodensky here, but for the large portion of viewers, this film is as likely to induce a headache as anything else.

The third film in the trilogy, Twilight Watch, is currently in production and is set to be shot in English. 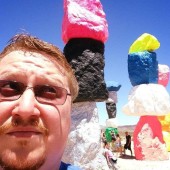