As an avid fan of the band, I couldn’t help but be excited to see this documentary from Sam Dunn and Scot McFadyen, makers of Metal: A Headbanger’s Journey. I have watched several other musician documentaries, and the obvious standout is of course, Metallica: Some Kind of Monster. In that film, the tumultuous nature of the members of Metallica plays out similarly to any contemporary reality show on MTV, and I think that is the reason it has been so well accepted. Beyond the Lighted Stage is not like that, partly because, unlike most bands, the guys in Rush actually get along. There is no tension, no childish antics, and no personal meltdowns to provide entertainment. Instead, the band Rush provides an interesting subject to observe simply because the band is such an anomaly. I am not going to go into too much detail beyond that (that’s why you watch the film), but I will say that this is a very fitting and enjoyable film for both fans and non-fans alike. Celebrities and fellow musicians (Jack Black, Gene Simmons, Billy Corgan) all chime in on their own fascination with the band and help to shed some well-deserved light on the Holy Triumvirate. Perhaps not as controversial or gripping as other documentaries, Beyond The Lighted Stage is nevertheless as informative as it is entertaining. 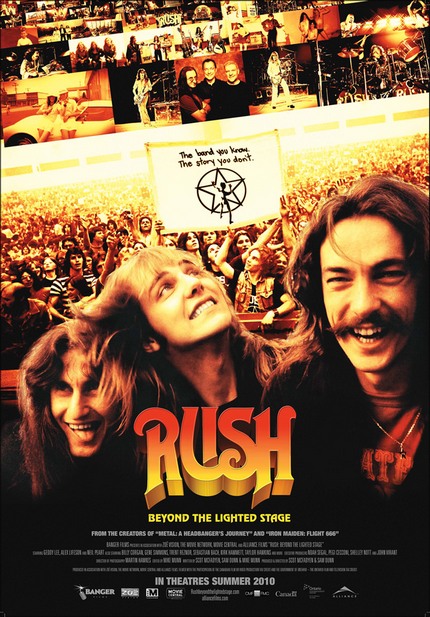 Synopsis: The progressive/hard rock trio called Rush formed in 1968, and despite currently holding the record for most consecutive gold and platinum records behind the Beatles and the Rolling Stones, has yet to achieve widespread acceptance by critics and audiences alike. That is not to say that the band is unpopular, just that the band, for whatever reason, is often overlooked. Beyond the Lighted Stage sheds light on this fact while explaining the emergence of Rush from playing in church basements to playing for sold-out arena crowds, all while the band maintained its core integrity and focus on music.

Narration: Directors Dunn and McFayden never actually appear in the film or use a narrator to drive the story. Instead, the dialogue from members of the band and other musicians/celebrities is used to fulfill this purpose. It is very successful, especially given the way the film is structured. I found both Jack Black and Billy Corgan’s comments to be very insightful and interesting, more so that even the band’s own comments. The downside to this sort of narration is that the documentary is not spontaneous, it is not studying the band in action or how everything works, instead it is more of a history lesson with celebrities giving their own opinions about the various events. Good (21/25)

Structure: The documentary is meticulously structured (maybe like the band’s songs?…) into sections with their own titles. These sections are ordered chronologically along with the bands’ history, such that a clear picture of the band is not apparent until the very end of the film. I found this to be a very efficient way of structuring the documentary; not only does this keep you watching, but topics not directly related to the history of the band (such as fans or the impact of fame on the band member’s lives) are dealt with when they chronologically are deemed most important rather than at the beginning or end of the film. Good (24/25)

Direction: Like I said, the directors never make an appearance (besides their voices) and this is a benefit to the movie as the focus is entirely on the band. Historical clips and concert footage is used heavily, and I thought that this helped to better explain the history of the band and how the music evolved over time, especially for non-fans. This was further enhanced by showing the lyrics of the songs, an important part of what makes the band unique. Most impressive though, is how the directors chose to show both the positive reception the band received from its fans in contrast to the very negative reception from critics to further illustrate the unique position the band maintains. Good (22/25)

X-Factor: Again, the documentary is not scandalous and is all but absent of the tension that many people expect to see in a rock band. This though, is what makes the documentary work as it is fitting to the band. The purpose of the film is to bring to light the accomplishments of a band that deserves to be noticed, and I feel that it accomplished this fact. That being said, I feel like there was detail lacking in certain areas that could have emphasized the film maker’s points better.   Good (21/25)

Also, check out: Ranked: Top Ten Most Important Movies of All Time