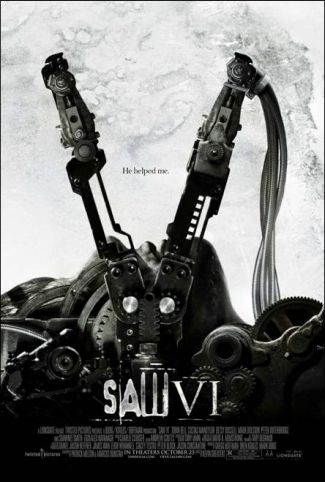 There are some film series’ that feel like they go on forever.  Producers and production companies try to milk any and everything that they possibly can out of it.  New plot lines and characters are created, attempts at different twists are entered, budgets are increased and even state of the art special effects are created to attract as many members of different audiences as possible.  Star Wars is not one of those, but then again it is not a horror franchise.  Halloween, Friday the 13th, and Nightmare on Elm Street however are but may or may not be placed in this category depending on your own opinion.  But love them or not, they did yield some timeless classics.  Another horror franchise that seems to have a split decision in fans is the blood fueled Saw series.  Now at a super high number of 6, it has got to be the longest running film series of present time.  Whether you like it or not, it has never failed at producing some of the most stomach turning horror scenes of all time.

Part 6, going along with all the previous chapters, picks up where the last one ends.  Detective Mark Hoffman (Costas Mandylor) is still at large continuing the work of Jigsaw (Tobin Bell), his mentor and teacher in bizarre ways of educating people just how precious life is.  The movie begins, as usual, with two random victims who wake with their whereabouts unknown and presented with the unpleasant task of passing a test.  They must “compete” against each other by seeing who can relieve themselves of the most amount of flesh.  They must place the body parts that they hack off on a scale and whoever weighs in the most gets to keep their life or what’s left of it.  The real story continues with Hoffman targeting Dan Erickson (Dan Erickson), a health insurance agent who hasn’t done right by his clients, approving healthy ones and denying the ones who actually need help with their hospital bills.  His team of six employees who review applicant’s applications are responsible for finding errors in their requests for insurance and cancelling their policies.  He also happens to be the same man who told Jigsaw his cancer condition wouldn’t be completely covered under his policy and there wasn’t anything that could be done about it.  Needless to say, he kind of had his encounter with Saw’s finest coming.

Not only is Erickson brought in to pay for his sins, but his entire application review team as well as the company’s attorney are thrown into the mix for good measure.  He is forced to play God and make decisions about whether they should live or die through a series, not just one, of tests that he must complete in order to save his only family who is only being held captive.  While he is acting out Jigsaw’s last known dying orders, Hoffman also tries to avoid being caught by the FBI team that he worked alongside in the previous films who are dangerously close at figuring out his secret.  He also keeps in contact with Jigsaw’s widowed wife who is well aware of her late husband’s post mortem wishes.  She seems to be caught in between her feelings for her husband, his reasons for carrying out these gruesome attacks and her conscious about the killing of these people.

This film dives into and divulges quite a bit of Jigsaw’s past, his relationship with his apprentices and his wife’s role in all of this.  A good knowledge of the previous five films is well needed to be able to follow this films plot.  I feel, like many other viewers, that the Saw movies all seem to run into one another.  They all combine to form one mega-movie.  Sort of like Quentin Tarantino meant for Kill Bill to actually be one movie but it would have been like 4 hours long so he cut it in two and labeled them as volumes.  Sometimes it’s difficult to keep account of every detail in these films but I’ve found if you simply keep up with the main plot, Jigsaw and his team trying to teach society a lesson through harsh tests while achieving a level of revenge, then you will be ok.

Part 6 doesn’t hold back on the level of gore and why should it?  That is what makes a Saw movie a Saw movie.  Right from the opening scene, it has the audience cringing with an “Oh my Gosh!” astonishment of terror.  It’s not one for the weak of heart or stomach.  The traps are more creative in this one including a shotgun carousel ride that holds the lives of the six application reviews in its clutches.  The acting is what you would expect from a Saw movie.  The usual no name cast added on to the returning members are also an expected.  People screaming in agony and pleading for their lives make up the brunt of the acting performances here; oh how horror brings out the humanity in us.  The screenplay co-written by Marcus Dunstan and Patrick Melton also contained rewrites by Bell himself.

With yet another chapter, 7 in total, on the horizon for the annual Halloween release time this year, Saw will be back at it again.  The story and plot line of Jigsaw trying to save the world from corruption and deception trough his always morally incorrect tests are starting to wear quite thin but the new and always delightful traps that are set for his victims are still a pleasure and are what keeps this franchise moving.  Wondering if the production team will finally call it quits at part 7, I give Saw VI “3 deadly ways to choose if you want to live or die out of 5”.

“You think it’s the living who have ultimate judgment over you, because the dead will have no claim over your soul. But you may be mistaken.”