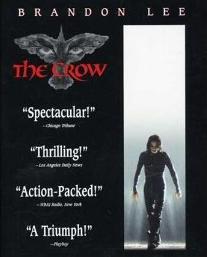 In one horrible moment everything can change, and your life and the lives of those you loved can be destroyed by men consumed by evil. But, what if you had a chance to return to exact vengeance upon whomever was responsible for such an event? This was the basis for the 1994 gothic-infused action film “The Crow” based on the comic book created by James O’Barr.

“The Crow” follows the quest for revenge that consumes Eric Draven (Brandon Lee) upon his return from the dead one year after he and his fiancée, Shelly, were brutally murdered by a deadly gang. Assisting him in his mission are a mystical crow, a former detective turned beat cop (Ernie Hudson), and a young girl that he and Shelly used to care for. Now, one by one Eric is picking off those responsible for that horrific night, so that his soul may finally know peace. However, the gang isn’t willing to just go down without a fight, and their leader (Michael Wincott) has his eye on gaining the supernatural power that drives this new hero.

When this film was released it had been two years since Tim Burton’s “Batman Returns” had met with mixed reviews from critics and moviegoers alike, and the comic book movie craze was still years away. So, to adapt a relatively obscure title such as this one, amidst a fickle public regarding dark heroes (audiences embraced Burton’s first Batman movie, but shunned the second due to its darker tone); not to mention using a fairly unproven actor as your star, made “The Crow” a potentially risky endeavor. Yet, the gamble paid off across the board, and to this day the movie remains one of the strongest comic book adaptations ever created.

Charged with adapting this lesser-known comic book into a potential feature film were scribes David J. Schow (“The Texas Chainsaw Massacre: The Beginning”) and John Shirley (“The Specialist”). Finding success with comic book inspired movies during the nineties was not the easiest of challenges to complete. So, why is it that this comic book movie, dark overtones and all, was able to succeed where many others failed?

Well, as with any comic book movie, one of the most important elements that must be present is a respect for the source material, and the willingness to stay as close to said material as possible. Of course, when dealing with not only a dark and gritty source, but also one steeped heavily into the supernatural, staying true could result in an alienation of virtually everyone except for the most ardent of fans. Even so, the writers stayed the course, remained as faithful as possible (there were some changes and omissions, but in my estimation they were for the better) and delivered to audiences a hard-hitting, fast-paced, and undeniably entertaining action flick that succeeded despite the odds.

Within the movie’s story there are many interesting segments, as any good movie should have over its duration. For many viewers I’m sure the action scenes were some of the most memorable, and of course exciting moments. To me the portions that really sold the movie were the quieter, more introspective scenes that delved deeper into the various characters of the film.

For two writers that had previously dealt with either crappy horror sequels or a couple of episodes for Saturday morning cartoons, the amount of solid, intriguing character development was surprising. At the time, it seemed that the mind set for comic book movies was to go bigger, better, and louder with the action sequences, and if the story suffered in the process, so be it. This would prove to be a fatal blow for one of the biggest superhero franchises around at that time; it’s just too bad nobody heeded the warning signs to prevent the issue. Thankfully, the writers of “The Crow” were wise enough to avoid this type of mistake, thus the movie was able to do well.

Two other key aspects to the movie remaining believable and enjoyable were keeping it grounded by terrific performances and having a visually stylistic director. Obviously, getting the story right is paramount for any film to thrive, but when dealing with this type of movie, not having the right director and/or actors can be extremely detrimental no matter how incredible the script.

Leading the cast with a star-making performance is actor Brandon Lee (“Rapid Fire”). As Eric Draven, Brandon delivers an excellent performance that is often times full of rage, intensity and sadness, but during the flashbacks we see a fun-loving and caring individual that possesses a charisma that instantly captures your attention. It’s that ability to convey such a wide range of emotions in a single performance that would have made Brandon a massive success. Sadly, this rising star was accidentally killed during the filming of this movie, and much like his late father (Bruce Lee), his end came far too soon.

In the most noteworthy supporting roles are actors Ernie Hudson (“The Substitute”) and Michael Wincott (“Alien: Resurrection”). Ernie’s portrayal of Sergeant Albrecht, an officer who discovers that Eric has returned and assists him in his pursuit for revenge, is plagued by some minor bouts of clichéd dialogue. Yet, in the end the sincerity and earnestness in his portrayal carried the character well beyond the flaws.

As for Michael Wincott’s performance, his gravelly and menacing voice helped make him a perfect choice to portray the leader of the gang. Displaying such an obvious disdain for anything good or righteous in this world and a somewhat twisted sense of humor provides for a chilling and memorable performance for Michael, but also an excellent villain for this type of movie.

Lastly, serving as the glue that binds all of the various aspects of the movie together is director Alex Proyas (“I, Robot”). Taking an obvious cue from Tim Burton’s work on “Batman” and “Batman Returns”, the look of the film is undeniably gothic from the characters to the architecture. To the point, that there are moments that one could begin to wonder if some of the set pieces were simply brought over after those two films wrapped. Beyond the drab look of the film, Proyas moves out from Burton’s shadow to create a world consumed by darkness and evil that could arguably be more hopeless than that of Gotham City.

Then there’s the terrific camera work that gave the movie an even more distinctive style, from the establishing shots of the city via the mystical crow’s arrival to the kinetically-charged action sequences that are guaranteed to get the adrenaline pumping. Every scene was well staged and executed to deliver an all-out satisfying experience for moviegoers. Aside from the borrowing of the color pallet from the aforementioned movies (and even that’s forgivable), Alex Proyas proved he was the right man to bring this particular comic book adaptation to cinematic life.

Featuring a talented cast and great performances, a surprisingly well-conceived story, and action sequences jam-packed with intensity, “The Crow” is a thoroughly entertaining action film that absolutely leaves you wanting more.

“The Crow” is rated R for violence, language, sexuality, and brief nudity.