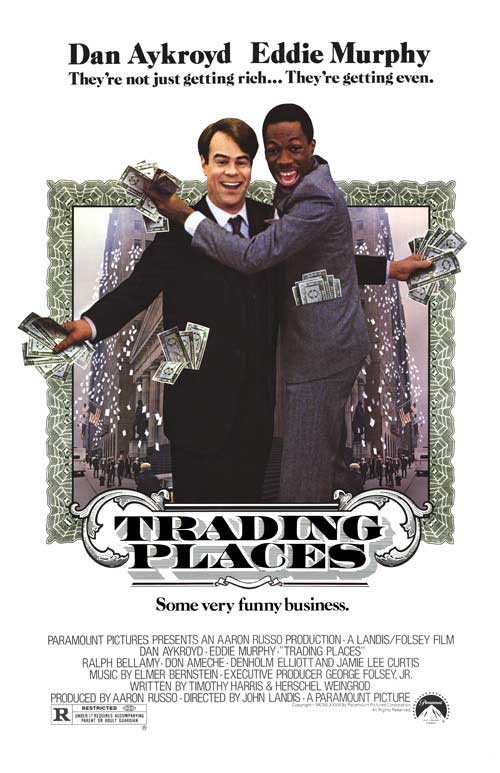 The concept of swapping places with someone else has always been a popular topic of discussion or fantasy.  Typically, we all want to know what it would be like to be someone else, preferably someone rich or better looking than ourselves or someone who is famous.  Perhaps someone in the role of power such as the President or ruler of a country so we could impose our own ideas and run things how we see fit.  Sometimes people wonder what it would be like to switch places with someone less fortunate than themselves.  The moral of that would be to realize how the little things in life that normally are taken for granted are considered to be sacred.  Director John Landis took The Prince & the Pauper story we all knew as a child and turned it one of the funniest comedies of all time, Trading Places.

This film which takes place in 1983 Philadelphia stars Dan Akroyd as Louis Winthorpe III, a successful stock broker working at a pretty big time firm.  He’s got pretty much everything he will ever need; a big house, butler, private limo, and a fiancée.  He accidentally bumps into conman Billy Ray Valentine (Eddie Murphy) one day who was pretending to be a disabled Vietnam vet to get money from people and accuses him of stealing.  Upon hearing this, Winthorpe’s two bosses, brothers who own the stock brokerage and love to gamble with each other on unique wagers, decide to conduct an experiment by swapping the two men to see how each would act being given the others life.  They do this of course without the consent or knowledge of the two.  The brothers feel Winthorpe will immediately turn to a life of crime and unruliness if placed in Valentines position and Valentine would not be able to properly do Winthorpe’s job successfully.

Winthorpe is befriended by a prostitute named Ophelia (Jamie Lee Curtis) who takes him in and takes care of him while he comes to terms with his new life and tries to find out what happened.  Meanwhile, Valentine proves to be rather good at Winthorpes job but was still peculiar about being randomly scooped up and put in this wealthy position.  About halfway through the movie, Valentine discovers the secret wager between the brothers and seeks out Winthorpe in order to rectify their situations.  The two decide to put a plan together to get revenge on the men who tried to play God with their lives.

Comedy films should all take a lesson from this classic.  Eddie Murphy is in his prime during this portion of his career.  He brings the laugh-out-loud antics to the screen as he is switched from a two bit hustler to a wealthy businessman.  His hilarious persona, what helped make him famous, is on full display here.  Dan Akroyd, another comedy godfather plays the more conservative, clean cut, corporate America worker who is uprooted from his wealthy comfort and forced to fend for himself.  Although funny, the realism of this aspect shows how an actual person might react and lash out at the world if their lives were drastically changed for the worst.  His performance of his characters’ attitude after he realizes he has nothing left anymore brings this out perfectly.

The sheer concept of this story is pretty serious and would anger anyone who it might actually happen to but you will have a very hard time not laughing at these two while they team up in what could possibly be considered a template for how to make a hysterical comedic film.  If you sometimes tire of the dry humor that some films of the present have to offer, you might want to go back in time and see some of the comedies from the 70s and 80s.  Absolutely loving the fact that I took the time to see a film that my parents enjoyed from their time, I give Trading Places “4 extreme life swaps out of 5”.

“I had the most absurd nightmare. I was poor and no one liked me. I lost my job, I lost my house, Penelope hated me and it was all because of this terrible, awful Negro.”

Reveiwed: The Kids Are All Right