Flamboyantly gay Austrian fashion reporter and host of “Funkyzeit”, Bruno ventures to Los Angeles, California with high hopes to become a celebrity. When his every idea and publicity stunt fails to catch fire, Bruno realizes that the way to make it in Hollywood is to go straight once and for all. 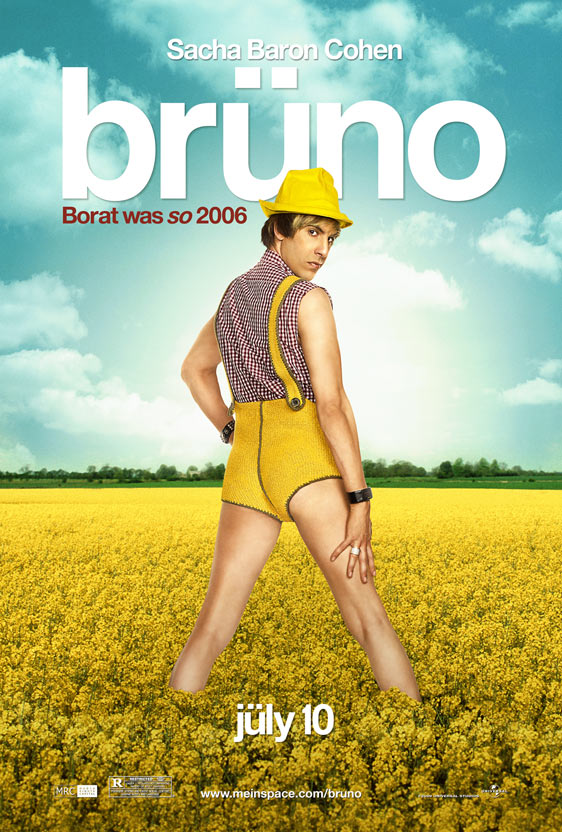 The last time we saw (sort of) Sacha Baron Cohen he unleashed on the world Borat: Cultural Learnings of America for Make Benefit Glorious Nation of Kazakstan. Borat is an explosive 5-star instant-comedy classic. Cohen spends that capital and follows that up by taking on the road his final, least popular, lesser known, not as loveable Ali G Show creation. It’s an unenviable position, but Cohen approaches Bruno with the same level of absolute superhuman comic fearlessness.

Playing exactly into the Borat formula, Bruno once again features Cohen at his most outrageous, dropped in the middle of one unbelievable situation after another forcing real people to come face to face with the living homosexual stereotype that he – and in many ways they – have created. But where Borat is a likeable, confused immigrant who gets away with anything  due to an American culture too politically correct to call him out, Bruno is more in-your-face, self-absorbed and clueless. It’s these more abrasive characteristics that keep Bruno from reaching the satire of homophobia that Cohen masquerades it as. Actually before it gets weirdly genuine in the final minutes (arguably hypocritical), Bruno almost goes out of it’s way to keep comedy comedy and avoid any political or social discussion. At one point, even walking his characters through a group of anti-gay protesters in full dominatrix uniforms merely for the sight gag. Bruno goes up against terrorists, but doesn’t engage these people. Instead, Bruno wants to be famous and Cohen spends much of the film with the bulls-eye on those that so desperately want fame they will sacrifice any shred of morality for it.

Bruno lacks some focus, hopping from Bruno’s audition for a talent agent, to auditioning the parents of child actors themselves, to getting Bruno in a boot came and hunting with some unsuspecting country boys. As a comedy it’s uneven, with several dead spots with extended unfunny gags (what is the point of Bruno graphically miming ghost sex while a psychic pretends not to watch?). The sex scenes are so over-the-top many of the bits wouldn’t qualify as sex. On a second viewing the scene shifts didn’t feel as random as it did the first time.

It’s a movie where anything can happen. Cohen is terrific here. He and the movie are wonderfully without shame. Bruno cluelessly stampedes over every taboo in his way, pulling the audience along for the roller-coaster ride, fingers gripping the seat, hands ready to cover the eyes at a moments notice. It’s almost a horror show of sexual outrageousness. It’s an invigorating reminder of how great comedy knows no limits. And when it’s funny, it is hilarious. There are several inspired moments in the celebrity satire section of the film, such as Paula Abdul sitting on Bruno’s “Mexican chair people” and Bruno and his African baby appearing on a Dallas talk show with a predominantly black audience. Some of the people Bruno encounters even have a good sense of humor about it all. He has fun with a self-defense trainer who teaches him how to defend himself against a homosexual coming at him with his pants down. Cohen even gets upstaged at one point by the 2nd tier homosexual converter who goes into a funny little bit about annoying women that the audience in my screening was agreeing with.

And it gets progressively better, eventually getting to the real fun of Bruno: positioning him as a fish-out-of-water in several masculine scenarios, even trying to pass as a heterosexual. Finally, Cohen bites into straight converters, male bonding, wrestling and swingers in an orgie sequence that, despite black boxes, still feels so sleazy the R rating doesn’t do it justice. It all builds to one scene. One show-stopping, fall-down hilarious finale. It’s Cohen’s twisted version of the Frank Capra mea culpa before a huge crowd that oddly enough pulls all the strands together. It brings down the house.

It’s a spotty movie as a whole. Much more “stagey” than Borat. But it’s often screamingly funny. Director Larry Charles, puts it all together pretty well, playing Bruno’s pathos absurdly straight and using several perfect musical cues. Everyone keeps the mix between satire and frat boy comedy on an even keel. Cohen is at a 10 the entire time. Dancing, throwing himself around and spewing out pseudo-Austrian translations. That commitment to the absurd keeps it interesting. With so many comedies playing it safe, I cherish every brief trip to Sacha Baron Cohen’s caustic, clever, outrageous mind.