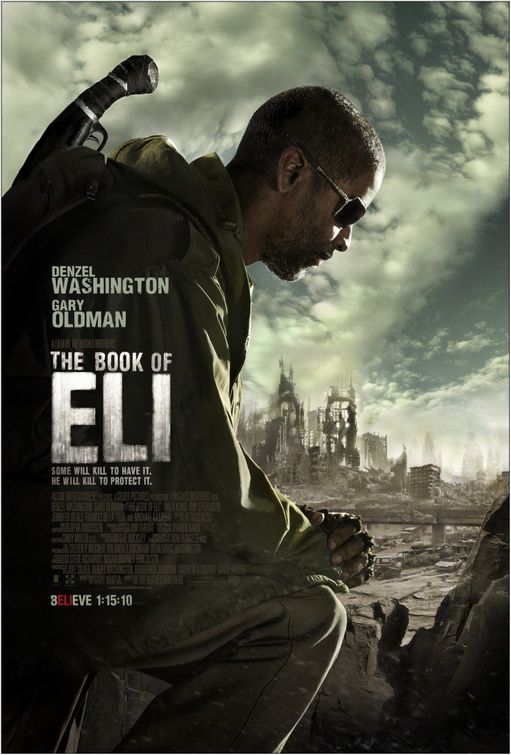 Post-apocalyptic stories seem to be pretty popular.  They capture the attention of the viewer, listener or reader probably due to the frightening realness that they contain.  They present the major probability of something similar happening in our real world.  Who would be surprised if some event caused our society to be thrown into a barren wasteland where the little things you once took for granted were now held above all else?  Films like Doomsday, Terminator, I am Legend, even the Matrix trilogy and pretty much any zombie movie ever made fit into the mold that have people thinking, “wow, are we really ready for something like this?”.  In the words of Whitney Houston during her husband’s short-lived reality show; “Hell to the No”.  The state of our economy alone is example enough to believe that this could become a reality.  The Hughes Brothers reminds us of this in The Book of Eli.  No strangers to the violent movie sub-genre, they stand true to their trademark filmmaking in their latest project.

We have quite possibly the coolest and smoothest actor in the land in the form of Mr. Washington as I call him playing our hero.  The film starts out with him nomadically traveling across what is left of the United States periodically stopping during the night to rest, wipe himself down with wet-naps (which is probably what is substituted for bathing in this post-apocalyptic world), dine on whatever “wildlife” he hunted during the day and take some very special time to read before he sleeps.  This time it’s roast cat that serves as his meal.  He resumes his journey early the next day only to encounter the first living characters that are introduced to the audience other that himself.  They turn out to be hijackers who want to obviously cause him harm and steal whatever he has.  They ask him if he has any water and what he’s carrying in his backpack.  After he tells them he has no water left and refusing to give up his backpack, the group of about 7 men, all armed and 1 with a chainsaw, approach him and the audience discovers that Denzel is quite the fighter.  He dispatches them all with ease and without even breaking a sweat leaves them in a gruesome limbless heap.

His journey brings him to a town where our antagonist named Carnegie (Gary Oldman) resides.  He is on a mission himself, to find a certain book.  It isn’t revealed quite yet just what book he is searching for but he sends his henchman out everyday looking for this book that they have not yet found.  Judging from the looks of the townspeople’s lips and Denzel ordering water at a bar, it is safe to say that water is in severe scarcity and very precious.  Everyone also wears some kind of eye protection from sunglasses to goggles to protect themselves from the sun.  Carnegie has a blind concubine whom he owns along with her daughter, Solara (Mila Kunis).  Upon learning of Denzel’s arrival in his bar through a fight that had broke out with Denzel easily winning once again, he questions him about himself and if he happened to read a lot.  Denzel responds with a yes and is provided shelter that evening.  Solara is sent to seduce him in order to help Carnegie discover if the book he is looking for has found its way to him through this mystery traveler.  Of course the answer is yes and the real plot begins.  Solara escaped her captor and tries to accompany her new found friend on his journey with Carnegie and his men in hot pursuit of them all because he has to have that book!

The plot in this film unfolds slowly which will either give impatient viewers an ulcer due to frustration or will fill die hard movie goers with delight at the suspense that it builds.  We don’t officially learn that Denzel Washington’s character is Eli until about halfway through the movie and we don’t, even though it can be figured out, find out exactly what is so special about the book that he is carrying and why he is carrying it until the very end.  The screenplay written by Gary Whitta, although slightly frustrating at times due to the lack of early information, was well put together.  The story builds and plays out at exactly the pace the filmmakers wanted it to.

Denzel Washington plays his character with the cool and calmness that we are accustomed to from him.  He commands the audience’s attention whenever it’s his turn to lay down some dialogue.  At the very beginning I was afraid the “badass” aspect of his character was going to be over done, but as the movie goes on it fits in well with the story as well as the other characters.  Mila Kunis was pretty much his sidekick in this one, she has her own back-story and desire for wanting to put her mother in a much better situation than they are in but to me she fell into the “Robin” persona.  The I want to be your protégé and follow you to a better existence but not before I put myself in all kinds of harm in which I will need you to save me persona.  Gary Oldman wasn’t my favorite villain in this film but serves his purpose as a bad guy.  His obsession with the book shows the madness every villain should possess every once in a while.  Along with about 20 or 30 extra expendable henchman to do your every bidding.

Although some have pegged this film to be an action movie, I beg to differ.  I feel it’s a non-fiction science fiction thriller with some good action thrown in to entertain just about everyone.  How’s that for an oxy-moron?  With just enough blood and severed limbs and oh yeah, the mention of people eating other people, it will please the fans of gore and guts.  The rest of it will please everyone else.  I give The Book of Eli “3.5 glimpses at a world after the apocalypse out of 5”.

“People had more than they needed. We had no idea what was precious and what wasn’t. We threw away things people kill each other for now.”