[REC] could well be considered part a European horror renaissance we’ve enjoyed this past half-decade. Its Blair Witch Project comparisons did it a disservice as it took the same simple principle and exploited it to create a sense of genuine fear, the kind of constant unease that the original Texas Chainsaw Massacre utilised. The conceit of the film was that it was the footage of a particularly unlucky news team following a Barcelona Fire Dept. called out to a disturbance in a seemingly normal apartment building. I rate it as one of the best horror films of at least this generation and you should most definitely seek it out before attempting to view the sequel, especially as it throws us in to the action moments after the original’s climax.

This time we’re following a SWAT team sent in to clear up the scene and document everything. So while we’re back in the same building with a better prepared set of unlucky victims this is no rehash. There was, it seems, a great deal more to explore within the quarantined site, specifically in the roof and basement in the ever expanding living space. Such spatial concerns are rather swiftly swept aside by the films greatest boon and biggest conceit, the outright attribution of a supernatural force. This is the kind of move that can prematurely sink a franchise (see the risible Halloween sequels) but in fact raises the bar tension-wise. The half-starved figures relieving our protagonists of their higher brain functions are not the crazed products of unjust and extreme religious persecution at the hands of a delusional and sadistic priest. These are shells possessed by a malevolent demonic presence simultaneously more believable, not to mention threatening than any of
Hollywood’s horror antagonists in recent years.

Much like the underrated The Descent and Wolf Creek, [REC] and follow the horror staples of possibly paranormal but scientifically feasible terror while removing the clumsy idiocy of characters. [REC]2’s decision to eschew the logical reasoning of its threat does not extend to the plot, it is remarkably focused given the style. All these films give us convincing enough situations to chew over what we would do in the same situation. All the evil brought upon the victims is never due to incompetence but complacency or more often fear. This is best represented by the intense finale, the first time that the camera itself is consulted being the only source of vision in a blacked out series of rooms. The loss of light clearly moves our heroes into their most compromising positions, struggling to cope with circumstances bound to snap the steeliest of nerves. It is a particularly standout sequence in a near flawless film.

One unintentional effect is the level of detachment brought about by the language barrier. The same stock phrases required for these situations seem more alarming as the dispassionate subtitles tell us what the panicked, manic screaming means. You find yourself desperately switching focus between the bottom and middle of the screen, the clinical white text being a safe haven from the realistically styled camera movement. At moments of action the tension is multiplied exponentially. This is not to say that the so-called ‘Cloverfield effect’ occurs, while the audience is most definitely in the scene clarity is sacrificed for intensity only when necessary. The most notable case is a scene where our two camera wielders meet only to be interrupted by a rather severe attack, we are given only glimpses of the actual violence and are even left to ponder the eventual outcome due to a contrivance of character’s actions.

[REC]2 is the kind of horror film you’ll find yourself invested in, one that’ll be brought to mind the next time you’re in a park after sunset or a power cut leaves you scrambling through a familiar room hearing only the clunk of your desperate scrambling exacerbated by the ever-increasing beating of your heart until you find a light switch. 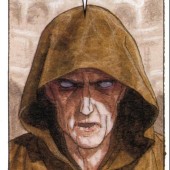