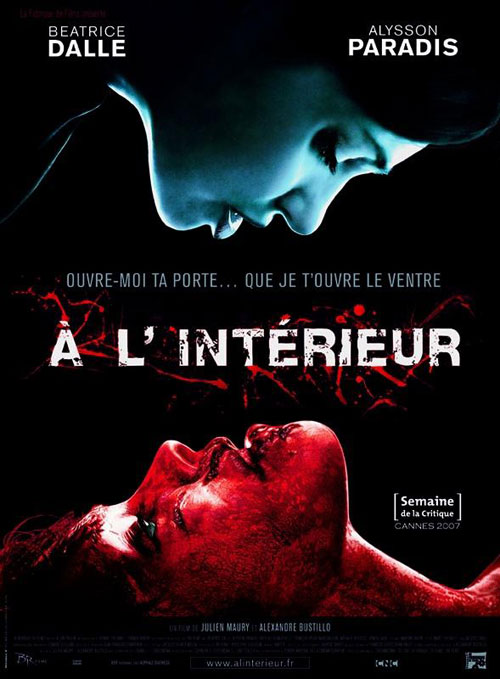 The rise of the internet and the pervasiveness of a PC everyone’s-opinion-is-valid attitude has spawned a subculture of bad internet critics who feel the way to determine a movie’s value is through a formula. A template. They go down a checklist containing such pros as “Character Development” or “Plot Holes” seamingly with no idea that nit-picking tiny things does not a bad film make. “Inside”, a French horror rollercoaster written & directed by Alexandra Bustillo & Julien Maury, blasts apart the template for the Message Board Nerd’s Good Movie Checklist and comes out a towering genre achievement for it.

It is Christmas Eve and Sarah, 9 months pregnant and depressed, sits at home with her photography contemplating if she even wants this baby after a car accident took the life of her husband a few months prior. A mysterious woman shows up at her back door wanting in. Soon enough, the woman is suddenly in Sarah’s bedroom, standing over the sleeping woman and armed with only a pair of sewing scissors attempts to take Sarah’s baby by cutting it out of her – right now.

What happens next is one of recent cinema’s most intense bloodbaths. Sarah’s house becomes a war zone as the two women duke it out for the life of the unborn child, where anyone who dares step in the middle of them is dispatched in equally gruesome and creative ways. “Inside” is – so far – the pinnicle of the new wave French horror that first washed up on American shores with Alejandra Aja’s impressive, absurd “High Tension”. Like other French horror films it is absurd, stars strong female characters and  pushes the envelope in violence and gore. In fact, the unrated version contains a finale I would be hard pressed to recommend. It is such a nakedly horrifying violation. Only the most jaded gorehounds need apply. If you, like me, were tired of seeing an American horror movie where the big star always gets away without a scratch on him by sheer luck, you’ll be giddy with excitement as these heroines drag and claw their way to the end, bloody and bruised. French horror heroines really earn their survival.

Why would you want to see a movie so gruesome otherwise? Because “Inside” kicks a**. Bustillo and Muary have masterfully put together an engrossing purely cinematic work of visuals, gore effects and music to bring one of the most genuinely scary movies I have ever seen to the screen. The images are nightmare inducing; the movie’s signature sound effect (their version of the American slasher “shing”) actually sends a shiver up my spine; and I was out of my seat during the last half of the film, no idea what would happen next.

In truth, yes, “Inside” starts a bit slow. All of that turns around soon enough when our nameless villain, credited as La Femme, shows up. Beatrice Dalle makes La Femme a fire-breathing, run-away-train of unmitigated rage. An unstoppable killing machine who relishes in male genital mutilation and has a creative improvised kill waiting for cops and cats alike. Cats never fair well in horror, but this movie takes even that staple to a new level. Let’s just say La Femme would probably have the chick from “Audition” begging for mercy.

Bustillo has some sly social commentary buried in here. This movie is a woman’s world, the actions of any man in it is completely irrelevant. They cannot help you. There will be no white knight riding to your rescue. Particularly if they are cops. “Inside” very specifically takes place during the French riots of 2005 and Bustillo depicts the French, cops unable to quell those riots, as pretty incompetent. In a laugh out loud moment, a cop even gives a gun to a perp in the back of the patrol car and recruits him as backup to go in Sarah’s house.

Horror can be a very personal thing. For me, “Inside” is the only movie that has truly shaken me since John Carpenter’s original “Halloween”. It is a tight, efficient piece of work torn down to basic human survival that grabbed me right in the gut and left me dazed long after it had ended. It is a high-stakes horror classic that – love it or hate it – should not be missed by any genre fan.