The Nightmare Before Christmas – Movie Review

The Nightmare Before Christmas Movie Review

Written by Mary Ribotto
Stop Motion Animation. It’s tedious, strenuous, and can screw you over if you mess up even the slightest. But the payoff can bring wonders to those behind it, and to general audiences all around the world. Stop motion films go as far back as 1897 and was brought to light by Albert E. Smith and J. Stuart Blackton for the film The Humpty Dumpty Circus. Fast forward to the year 1982. Tim Burton, an animator for Disney, as legend says, wrote a poem after witnessing Halloween decorations being replaced by Christmas ones which was the inspiration behind The Nightmare Before Christmas. It would later grow to be a huge success in the box office, and receive critical acclaim.

This stop motion musical fantasy film takes place in Halloween Town, where citizens live to scare, adore the holiday Halloween, and are ruled by Jack Skellington, the pumpkin king. After having stumbled upon Christmas Town, Jack and the rest of Halloween Town become fascinated by the strange holiday. When Jack becomes obsessed with it, he decides that Christmas will be done by the citizens of Halloween Town. Everyone in the town is enthralled by the idea, save for Sally, the love interest of Jack. After having an apparition of what would happen should Jack continue on with his plans, she constantly tries to warn him about it, but Jack remains oblivious and continues on, remaining oblivious still, when Lock, Shock, and Barrel hand Santa Claus over to the nasty Oogie Boogie, Jack’s rival and nemesis. When things take a few turns for the worst, and with Santa out of commission, for a while, it seems certain that Christmas will be forever ruined. But one has to remember, this is a Disney movie.

Nightmare boasts a few notable characters. And a whole slew of pretty awesome background characters as well. While some characters are annoying (like the Mayor), others like the female lead Sally, deserve some praise. She’s like the oddball of the town, and almost has a story arch of her own throughout the movie, going on her own journey and in the process, becomes a stronger being because of it. She’s unique and resourceful, and not the typical damsel we see in these types of movies. However, like Jack, she has a huge flaw, which is incredible shyness. Throughout most of the film, she is unable to speak up and voice her opinion and fears, which is something nearly everyone can relate to. The baddie of the bunch, Oogie, is very much like Freddy Krueger, as he takes delight in being bad and causing others misery. He is introduced brilliantly in the segment “This is Halloween” as a shadow on the moon, and ominously mentioned throughout the first act. The buildup to the character, is a definite plus. The main character Jack Skellington is by far my favorite. Smooth, classy, a great self-motivator, and holding the position of Master of Terror, Jack is one of Disney’s finest characters, but not completely perfect. He can be oblivious, and easily frustrated, however, he is still a good ruler. Not to mention he has a great singing voice.

When a movie such as Nightmare, has such a massive scope, one can’t help but admire the cinematography, art work, and design of the film. The lighting sets the atmosphere of Halloween Town perfectly, giving us a dark, rather dreary world, with many of the same colors and designs being used. In the real world, most of the human children are rather basic in design, and the houses are almost identical to one another. Christmas Town is the exact opposite of both our world, and Halloween Town, being filled to the brim with bright colors, joy, awe, and excitement. While the elves all look similar, Santa looks like how one would imagine; a big dude with a big belly and a long white beard. The scene with the best cinematography is during the song, “Poor Jack” where the camera does a 360 degree spin around Jack Skellington’s form on the grave’s statue. There is something about that moment that just…seems to kick the movie up a notch. The movie is filled with little bits of animation that serve no purpose to the film as a whole, other than to keep the audience sucked into the world the characters live in, such as the scene where the Mayor puts his spider tie back on, or the scene where we see Sally petting a cat during “Sally’s Song”.

When writing an essay, or even a review, you learn that you should have an “attention grabber” and “This is Halloween” is a perfect example of that. This piece brilliantly introduces every major citizen of Halloween Town in a clever and smart way. “Jack’s Lament” is a complex piece that shows both the ups and downs of Jack’s life, and the character in general. It shows that while he may seem like pre-Madonna, he’s not really ungrateful for what he has, and he just, wants more to his life than what he has now. He accepts who and what he is to both OUR world, and his world, but constantly wonders if there will be more to his life that that. “What’s This?”, an upbeat song, reveals Jack’s wonder of Christmas Town. As he continues to sing and explore the world in wonder, the more and more I at least, get drawn into the fascinating (and marketable) world that is Christmas. While being a simple song lyrically, “The Town Meeting Song” has a pretty good orchestral background and goes back and forth from soft and innocent to loud and mischievous. While the instrumentation is good, it’s arguably one of the weakest songs in the film. “Jack’s Obsession” is almost like a complete reversal of “Jack’s Lament” but still has that same sense and tone of “Jack’s Lament”. However instead of feeling grief over something, Jack feels nothing but frustration at not being able to figure what exactly Christmas is. I enjoy this song, as it is relatable to someone trying to figure out a religion or love or death. Sometimes there aren’t any logical answers for those things, and Jack’s conclusion is a definite testament to the near madness he goes through during the number. “Kidnap the Sandy Claws” reminds me of how villains explain what their plan is to the capture hero, but since the hero isn’t in sight, it makes the song itself seem like mischievous fun when the deed underneath is just bad. That is sheer brilliance. In this song, we are introduced to Lock, Shock, and Barrel, who are henchmen to Oogie. Having a rather upbeat and mischievous score to rather nasty lyrics is a brilliant contrast. “Oogie Boogie” is a delightfully menacing song which basically tells us how screwed Santa is. “Sally’s Song”-sung by Catherine O’Hara-is a beautiful, short yet haunting piece that pulls you into the pain of having an unrequited love, which is something everyone on Earth has gone through at some point, and the pain of not being able to live and enjoy life as others do, as well as having a feeling or sense of being sung by one who is an outcast. It is easily the best song during the movie. “Poor Jack” showcases Jack Skellington’s personality incredibly well. While we get snippets of his personality in “Jack’s Lament” and “Jack’s Obsession” and throughout the film in general, this song in a way shows Jack’s real nature. In one song he goes from being miserable, and almost giving into his defeat, to self-motivating himself, quite prideful and figuring out whom he really is as well. I also admire that the song while going through so many emotions, doesn’t give me emotional whiplash in the process. Quite the self/soul searching journey in the span of two and a half minutes. “Finale/Reprise” consists of…Well reprises. Not something one would see after the climax of a film such as this, but for the most part, I don’t mind it. The reprises are blended together so well that it doesn’t bother me. This piece is the grand finale, with wonderfully well done throwbacks to nearly every song in the film. Not only that, but it also accompanies probably one of the most romantic moments in Disney and Stop Motion history.

Films such as Nightmare Before Christmas come around once in a good long while. There are so many reasons why it did so well. While many can agree that the film is indeed a musical masterpiece, a debate still goes on when people watch it. People are still unsure if this film is a Halloween movie, or a Christmas movie. Is it something to watch to get one into the Halloween horrors, or into the charming Christmas spirit? With awesome characters, memorable songs, and a rather good story, The Nightmare Before Christmas is a marvelous masterpiece, and practically perfect in every way.
Rating – Two Thumbs Up 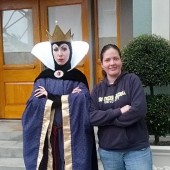 I'm a college student who's always been into movies. I also always had a strong opinion and voice on any movie, so the only logical thing to do with my life is review movies. I live in Arizona, and go to college here. Afterwards, I plan on moving to another state. Although where is a complete mystery.