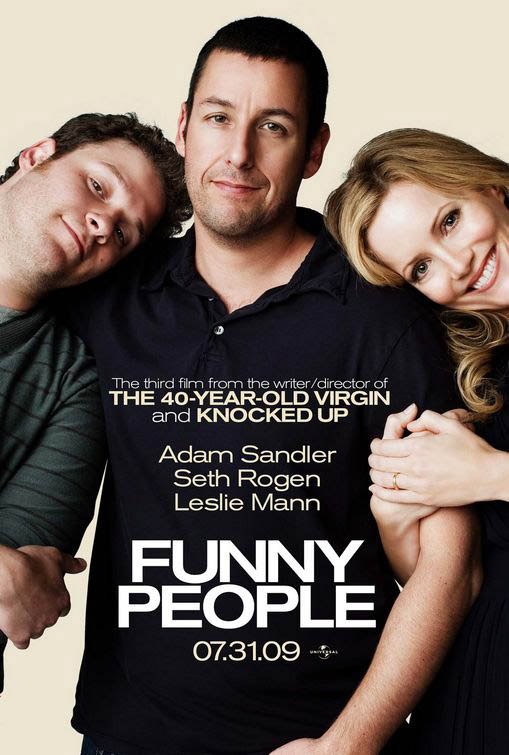 One can probably define an illustrious career of comedy by using Adam Sandler as an example.  He has been is some of the most hilarious comedic roles in film history.  From spot on roles that deal with real life situations to just plain stupid comedy, which is my favorite, he has done it.  He tackles another kind of role in Funny People, which chronicles what actors and comedians go through from just starting out writing jokes to making it to the big time.

Sandler plays George Simmons, an established comedian/movie star who although is very successful seems to also be very lonely in his life.  Very early in the movie, like at the start of it, the audience gets to see some of Sandler’s early amateur work prank calling a number of unsuspecting businesses “Jerky Boy” style with his friends.  This not only sets up a look into the character, George, but more so shows us Sandler at the very beginning of his tenure in comedy.  After a visit with his doctor, George learns he has contracted a form of leukemia and will probably die.  But some hope lies in some experimental medicine that may pull his health back to normal.  He meets some up and coming comedians at a stand-up comedy club and asks one of them to write some jokes for him.  Ira Wright (Seth Rogen) is that comedian who goes to work for George.  Ira is desperately trying to establish himself as a good comedian but has some trouble consistently writing funny jokes.  So being able to work for George Simmons is a bona fide comedy dream come true for him.   At first he just starts writing jokes for George but then becomes his assistant.  He opens for him at comedy clubs, helps him develop stand-up material as well as talking to him until he falls asleep every night.

George has many regrets in his life, but none more than cheating on and losing his long time girlfriend Laura (Leslie Mann) who has gone on to marry and have children with someone else.  He eventually tells his long list of celebrity friends (many well known comedians make cameos in this film which adds to the overall concept of the story) and family that he is dying and tries to reconnect with his sister and parents as well as Laura.  The film goes on to follow George and Ira as they both deal with getting to know each other and turning their lives around.  George in turn gives Ira some pointers about his bits and talking to girls and such in exchange for his work.

Funny People, at times, seems more like a drama than an actual comedy but it kind of works for it very well.  It indulges the audience in the life of a comedian and it’s not always fun and games.  That persona is something they might portray in the public eye to either further their career or preventing people from getting close to them.  This is a classic case among many celebrity comedians that we all know; Andy Kauffman, Jim Carrey, Drew Carey and Roseanne Barr to name a few.  George’s illness is just an added negative to his already empty life outside of his work.

On the funny side, the jokes, both stand-up and movie wise will make you laugh out loud.  Especially a tirade that Leslie Mann goes on in an Australian accent in order to make fun of her husband, Clarke (Eric Bana), of the same nationality. One of my favorite parts of the movie.  Sandler and Rogen are great together, a regular Batman and Robin of silliness.  Add in Jonah Hill who plays Ira’s friend, Leo, and it’s a complete project.  For good measure, a couple other up and coming actors who have worked before in other Rogen films are also featured here.  In terms of acting, I would just call it everyone being themselves which works best for this film.

Written and directed by Judd Apatow, who has teamed up with Rogen, and is married to Mann, on several films delivers a hit.  If you’re expecting just straight silly nonsense all the time, then you probably won’t appreciate this film, but if you would like to delve into a person’s life and what they go through to make other people laugh, then this one is for you.  I give Funny People “3.5 jokes out of 5”.