I made a few changes to make this whole review writing thing easier on me. Also added recommendations to my rating system:

Yeah, so I’m a little behind the ball on this one. I hadn’t been able to see District 9 in theaters, but boy should I have. District 9 is the relatively cheap (about $30 million cheap) side project of Peter Jackson, who if you are not aware, was to direct the big-budget explosion-based Halo movie adaptation. When Microsoft and the film studios could not come to terms on the rights (or more accurately, the price of those rights), the film was abandoned, already have been budgeted and in pre-production. Jackson decided to give some of that money to director Neill Blomkamp, to make his own movie. The result is one of the best movies of 2009, and perhaps one of the most original screenplays of the decade. It shows that sci-fi movies don’t have to all be about fancy special effects and action (although there is plenty of that here too). Sure, you’ve seen some aspects of the film before (someone likes Unreal Tournament), and its not as memorable or lasting as Avatar will be, but its a movie where the sum of its parts is something substantial, something you can really bite your teeth into. In all, District 9 is a very entertaining film, no doubt the most surprising one of 2009. 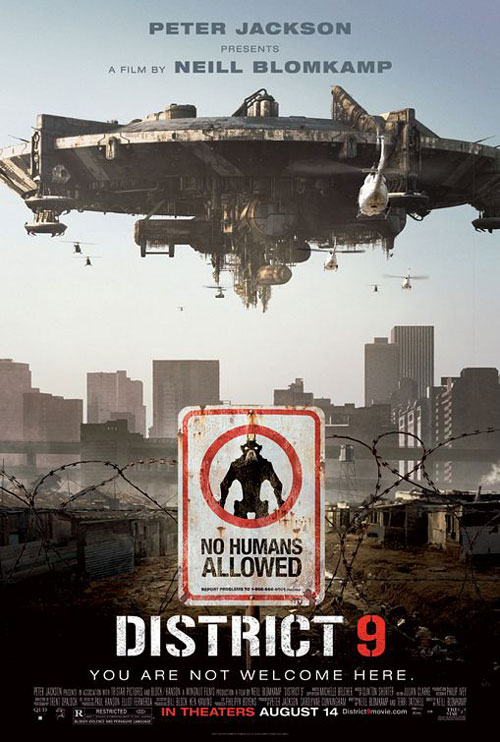 Synopsis: In a parody of the apartid in South Africa, a strange alien ship is stranded over Johnannesburg. Its inhabitants, now stranded on Earth, are forced to live in a slum called District 9. Here, they live their lives either fighting eachother or selling their technologies for food, seemingly unable to fix their ship and go home. When conflicts with the local population escalate, the government hires a weapons company to move the inhabitants of District 9 to what is in essence a concentration camp outside of the city. The coordination and leadership of task is given to Wikus Van De Merwe, who is given the job by his father-in-law, the company president, despite clearly having no idea what to do. Van De Merwe, in the course of this operation, becomes exposed to the alien’s biotechnology, and unbeknownst to him, becomes the sole human capable of helping them get home. If he can stay alive, that is… 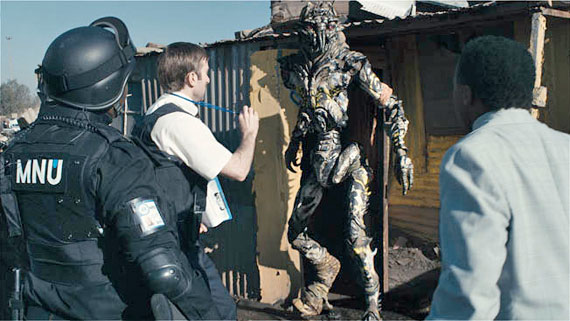 Acting: Sharlto Copley, like everyone else in this movie, is a relatively unknown actor, but he does a great job. He shows great range and wins the audience over by transforming an initially unlikable character into a hero. Cope plays the role of the main alien protagonist, and makes the aliens seem humane, even if their actions or treatment says otherwise. Overall, the movie is full of unknown actors and actresses here, and its refreshing to see a movie where every character is not played by someone you immediately recognize (Iron Man 2) and have expectations for. Good (22/25)

Script/Plot: The story of the movie is presented to the audience in an nontraditional manner. The exposition is filmed in a sGort of documentary style, and it seamlessly becomes the foundation for the rest of the movie. This is an entirely unique and interesting way to tell the story, and it works. Once the movie transforms to an action movie, the traditional story structure is used and the focus is entirely on the main characters. It is an interesting parallel to the way that chaos breaks out in the movie as well; at first, when the movie is in documentary mode, the situation is under control. Later, as the tension picks up, the movie loses these constraints. Good (24/25)

Direction: Much of the ingenuity in the way in which the movie is presented comes as a result of excellent direction. Blomkamp knows that on a $30 million budget, you aren’t going to be able to provide stunning establishing shots and focus on the special effects, so instead, the film uses both close facial shots and first person perspectives to create the action and to set the cinematic tone. Usually I am not a fan of the whole no-tripod-style of filming action scenes, but here it works. You actually know what is happening and the camera is under control. Good (23/25)

Special Effects: Like I said, the special effects are good, but obviously not on the level of Transformers. Still, you have to give credit where it is due, and the movie pulls off having at least half of its characters and even two main characters being completely computer generated. In other words, if the special effects were the primary entertainment factor, I may have been disappointed, but that is not the case at all. Its refreshing to see a movie for once that is not all about the special effects. Good (22/25)

My previous post: Ranked: The Top 10 Most Important Movies of All Time