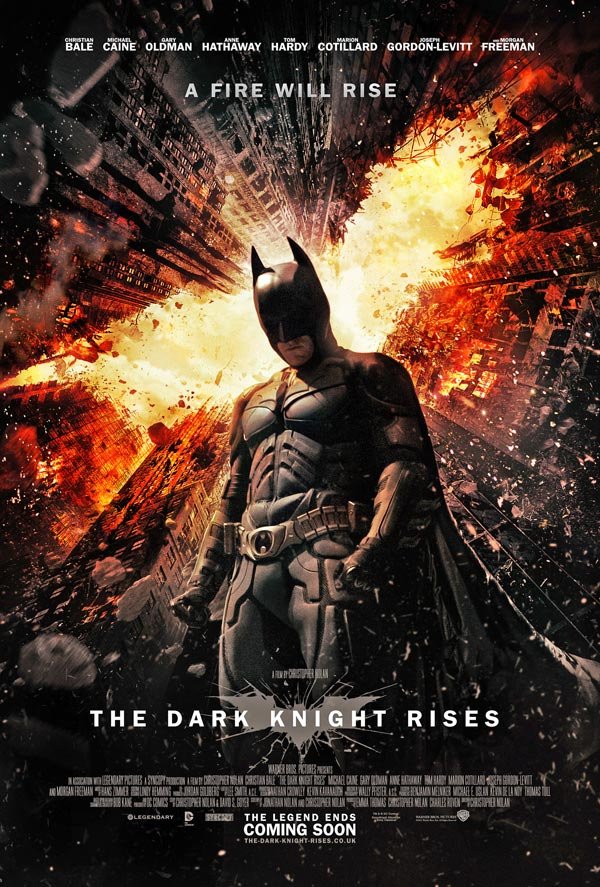 “Sometimes, a man rises from the darkness.”

This movie was one of this year’s most highly anticipated, but now, unfortunately, it will be remembered for something else. I dedicate this review to the victims of the movie theater shooting in Aurora, CO.

All things considered, The Dark Knight Rises is a perfect way to end Nolan’s Batman trilogy. This isn’t to say that the film itself is perfect – it’s not – but that it checks all the right boxes for a good finale movie. Unlike the franchise-ruining Spider Man 3, this latest Batman film doesn’t extend itself too far from what we’ve seen already. The movie opens some time after The Dark Knight took place; combining the consequences from those events with the origin story from Batman Begins to create a new story that is also very familiar. In fact, the biggest difference that I saw between this film and its predecessors was the amount of screen time in which the caped crusader is featured. Even though The Dark Knight Rises is above all about Bruce Wayne and his alter ego, a majority of the story is spent on developing other characters.

This characteristic is what makes this film succeed where Spider Man 3 failed. The previous two Batman films had developed Bruce Wayne’s character to such a high degree that it wasn’t necessary for this final film to do much more. Spider Man 3, on the other hand, tried to add something new to the titular character’s persona in a way that basically ignored what character growth had occurred in the previous two films. Perhaps The Dark Knight Rises isn’t as action-packed as Spider Man 3, or even as much as the previous Batman films were, but it is still fun and feels complete. Instead of all-out action, it spends its time sorting out all the loose ends from the previous two films. Therefore, as a stand-alone film it is not as successful, but as the finale of the story it works. 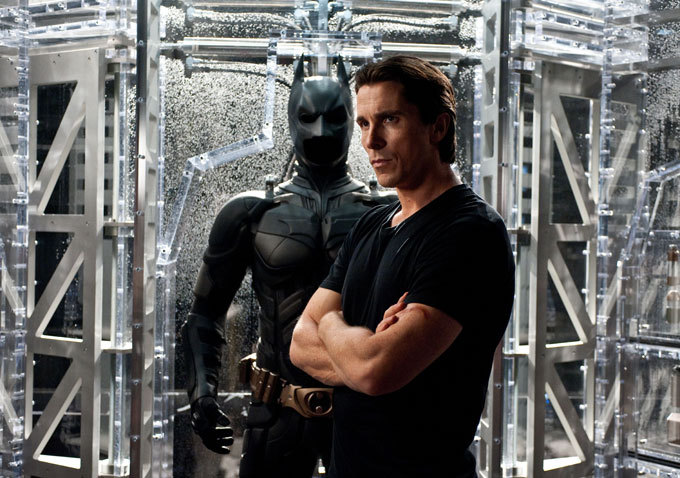 Story: Years after his run in with the Joker, Bruce Wayne, aka Batman is no longer the savior of the Gotham City; he took the fall for the corrupt Harvey Dent in order to help the city solve its crime problem. Luckily, it worked – organized crime seems to no longer be a problem, and therefore Batman spends his time hiding in his vast mansion. When a sly thief tries to steal something from him, a chain reaction starts and Wayne is forced from his self-exile. Soon he discovers that organized crime has not been vanquished, and it is a mysterious man (Bane) related to his past that is the one pulling the strings. Will he figure out Bane’s plan before it is too late, or will Bane be able to use Wayne’s past against him…(Okay 18/25)

Acting: Christian Bale plays the ever serious Bruce Wayne, and while his character may be less fun than ever, he does face much more adversity than before and as a result Bale’s performance is quite good. Tom Hardy plays the masked Bane, and while you never see much of his face, his emotions always come through even if his voice is a little obnoxious. Gary Oldman, Morgan Freeman, and Michael Caine reprise their supporting roles and are all very solid. Anne Hathaway fades in and out of the story as the thief Selina, aka Catwoman. Her character wears a tough-girl persona, and therefore at times Hathaway is guilty of overacting. Marion Cotillard makes a few brief appearances, and her character suffers from the massive amount of screen time devoted to everyone else. Joseph Gordon-Levitt plays a hot-headed cop, and is perhaps the most enjoyable character here. The rest of the supporting cast is rather generic, no one really stands out. (Good 22/25)

Direction: Christopher Nolan has made a name for himself crafting visually crisp and thoughtfully exciting films. This one carries on in the same tradition, but it feels less straight-forward and more muddled in unimportant details. There is simply a lot going on, and although the film is very lengthy already, it feels like it needed more time to adequately finish what it started. I’d say that Nolan directs this film into a grey area; on one hand it is trying to summarize the events and ideas from the first two films, but on the other hand it is trying to bring in so many new characters and faces to be exciting on its own. It doesn’t really succeed on either front, but is still an enjoyable film. Nolan knows how to capture raw emotions, and the type of thrill he extracts from the plot is reminiscent of Burton’s Batman films. (Okay 19/25)

Special Effects: This film has its share of action sequences, and although they may be less frequent and shorter than in the past they are nonetheless executed well. Batman has a few new toys to play with, and they do not disappoint. Overall, the film looks great and carries on with the high-contrast gritty look of the previous installments. Whereas Batman Begins will be remembered as a successful reboot for the franchise, and The Dark Knight will be remembered as Ledger’s grand finale, The Dark Knight Rises will probably be most remembered for the horrible tragedy that took place on its opening night. I think that is a fair assessment because even if the film itself does not completely live up to the hype it generated, we have to remind ourselves that there are more important things than movies in the world. As such, Nolan’s Batman trilogy may not end on a high note, but the conclusion is a fitting one that beckons thoughtful reflections on one’s own life. (Good 24/25)

Summary: Brings up lots of little questions, but answers the big ones.