“You still don’t know what you are dealing with, do you?”

The title slowly fades onscreen, one letter at a time. You already know what it is going to spell, but it’s not about that. It’s about setting a tone, and creating anticipation. From the opening titles, you know immediately that Alien is not your typical science fiction movie. In fact, much like Star Wars released two years prior, Alien was paving a new frontier for movie-going audiences to enjoy. You see, prior to Star Wars, science fiction wasn’t really taken seriously by audiences and movie studios alike. Sure there was 2001: A Space Odyssey and Planet of the Apes back in the 1960’s, but in reality this genre was left to cheesy B-movies or art-house type explorations. Neither of which really jived enough with the mainstream tastes of the time to ever be profitable.

What makes Alien so special is the way that it takes everything that came before it and transforms it into something new. Well, at least new at the time. Alien is one of those movies that we take for granted how novel it really was. Audiences today might look back and call it predictable, but really it was the slew of rip-offs and copycats that came in the 1980’s that dug those cliches into your mind. Alien invented a new way to create excitement in a movie.  It combined elements of science fiction with horror; and the thriller was born. This was far from the type of excitement that Star Wars promised, and didn’t have the one-dimensional story that was familiar in horror films. The thriller was exciting on multiple levels. Alien literally made you creep closer and closer to the edge of your seat.

Credit director Ridley Scott for the way his film builds towards achieving this goal. Everything is deliberate and calculated. The idea is to never make you feel comfortable with what you are watching. The music, the visuals, the way characters talk over each other, the low camera angles, the perspiration, the silence. It all works together to make a film that is one of the most innovative of all time. Speaking of innovation, I have yet to mention the fact that the lead character of this film is a strong woman. In the era of Burt Reynolds, Paul Newman, and Roger Moore, this action star is played by Sigourney Weaver. But it is about more than merely doing things differently, it’s about making those things work. Alien does things differently, and makes it work on all levels. This is a film that is really something quite special, and for that reason it is one of my all time favorite movies, a definite must see.

Story: A commercial ship is heading back to earth with a full load of cargo when a distress signal is intercepted. Per operations policy, the crew is required to check out the source of the signal. They trace the signal to a small moon, and land there to investigate it. What they find seems to be a crashed alien spacecraft. A few crew members venture inside to investigate further. What they find is something both intriguing and deadly, but when new information is discovered, the situation is even more complicated and treacherous than it seems….Good (24/25)

Acting: Sigourney Weaver leads a cast that is, all things considered, quite tremendous. Perhaps they are not all that well known today, but in their time they all were considered very talented and this film is proof why. John Hurt plays Kane, whose insatiable curiosity makes for one of the most infamous dinner scenes in movie history. Tom Skerritt plays the captain of the ship, Dallas, whose authoritative no-nonsense portrayal brings strength to the film. Harry Dean Stanton bumbles his way around adding some comic relief and lackadaisical moments to the otherwise tense film. Yaphet Kotto plays off of Stanton but also delivers his own memorable moments when it counts. Veronica Cartwright adds a different perspective, and Ian Holm is powerful on multiple levels. Powerful is what I would also describe Sigourney Weaver’s performance, which steals the show. Initially she blends in, but as the events unfold, she really shows a strength of character and a strong motivation that is typically not seen, past or present, in most roles portrayed by women. Good (24/25)

Direction: This was Ridley Scott’s second film and he really establishes his style here, which gives the film a strong, cohesive feel. Scott’s fascination with adding texture to light really feeds off of the gritty tone and helps to build a tense environment. Similarly, all his work goes into maximizing the visuals of the film. The budget was quite low, and even if it looks dated today, Ridley Scott was able to make the most with what he had. As I mentioned previously, Scott does a tremendous job of piecing the film together to maximize the thrill factor. The film uses lots of contained open space to keep you waiting, lots of silence to keep you thinking, and lots of movement when it counts to keep your heart rate up. Also impressive is the way the film is edited. All the superfluous moments are cut out. No long lingering at the end of a scene to watch everyone leave the room. No needless pauses in dialogue or other character interactions which would have otherwise detracted from the mood. Great (25/25)

Special Effects/X-Factor: Yes, the special effects are quite dated. The film’s modelling work didn’t hold up nearly as well as Star War’s did, but that’s okay. What makes this film a visual punch to the face is the work of artist H.R. Giger. His creations give the film a look that you’ve never seen before, and really have never seen since. Its a great example of how the visuals of the film can enhance it, adding a shock value that the script or even the characters can’t add. I’ll also briefly mention the score, which is terrific and much like the visuals, goes a long way to enhancing the film in a different, chilling way. Finally, this film will be remembered above all for its ingenuity; it created the formula for the modern thriller, and it featured a strong female character where traditionally a man would have been cast. Great (25/25) 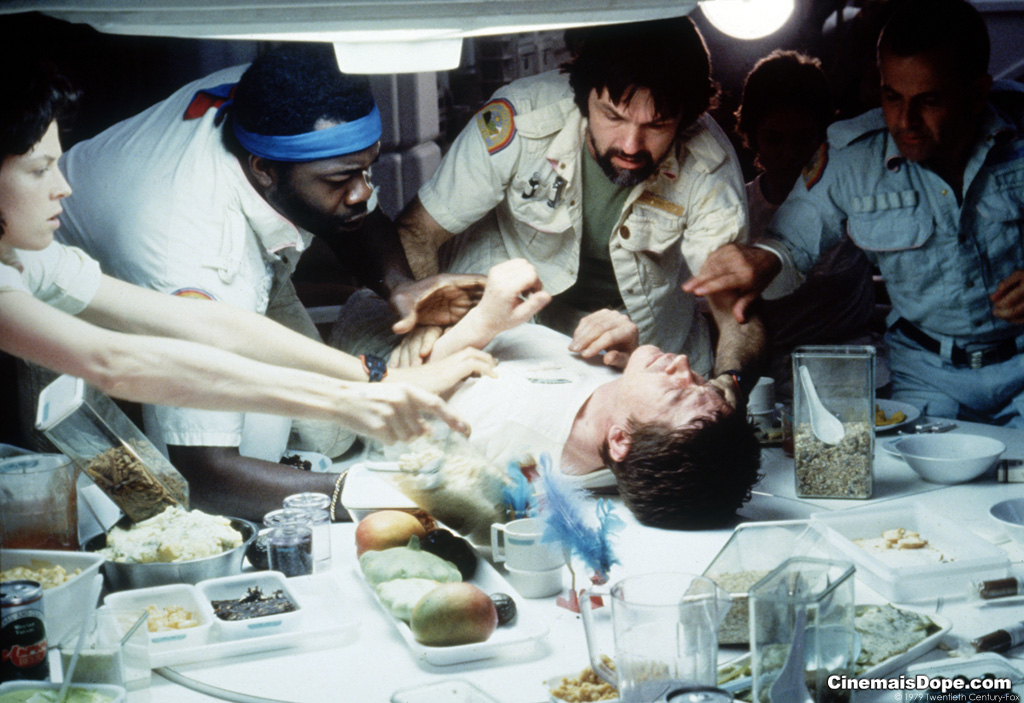