Yawn. Check your watch frequently. Try to remember what you need to pickup at the store. These are a few of the things you may due while watching the extremely slow moving import from across the pond, 44 Inch Chest.

Colin (Ray Winstone, The Departed) returns home from work to find his wife Liz (Joanne Whalley, Willow) with an upset look on her face. Liz tells Colin the one thing a husband never wants to hear his wife say, “I’ve met someone else.” After 20 years of marriage, Colin is shocked, then he becomes enraged. Later, he is close to a nervous breakdown.

The next day, Colin and his chums grab Liz’s loverboy from his job as a waiter and take him to a rundown apartment building. So, Colin can have his pound of flesh for his life being turned upside down. 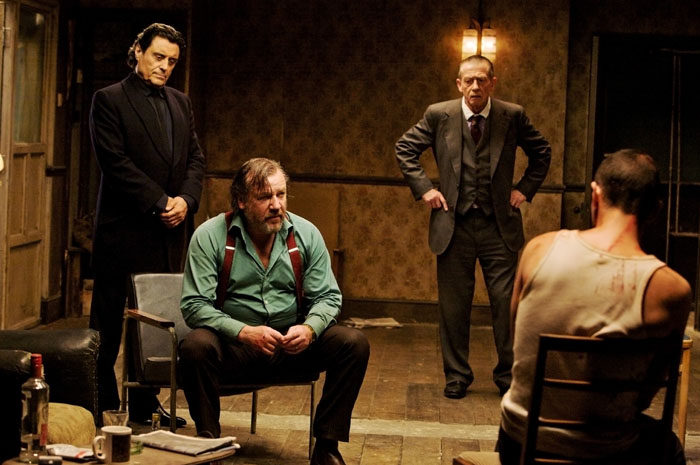 While 44 Inch Chest has some great performances by Winstone, McShane and Hurt, the snail’s pace as to which the story unfolds makes the whole movie less enjoyable.

44 Inch Chest is director Malcolm Venville first directing job since 1997 and it shows. He does a very poor job of keeping the action moving along. Even the characters in the movie seem bored by what is going on.

Colin drags on for 2 nights agonizing over his failed marriage and whether he should kill loverboy or not. Mal even says that it has to end tonight because he has things to do tomorrow. Archie agrees with him. Meredith is late for night 2 because he was out gambling the night before.

The only person whose heart seems into it is Peanut. He practically begs Colin to take some kind of action. “Be a man!!” Peanut keeps yelling at Colin.

44 Inch Chest had the potential to be pretty funny if it wanted to be because McShane, Hurt, Wilkinson and Dillane crack you up most of the time, but screenwriters Louis Mellis and David Scinto decide to focus in on Colin’s dark feelings instead. Poor choice, guys!

Even though the film moves like a turtle, Ray Winstone does a fabulous job of acting. He makes you feel Colin’s disbelief, anger and depression, while hoping it never happens to you.

Ian McShane, as an openly gay man, grabs your attention and doesn’t let go. He is so smooth and entertaining that you can’t wait until the next time he speaks.

John Hurt is outstanding as the grumpy friend, hell-bent on Colin getting his revenge on this low-life that has destroyed his good chap’s life. Hurt makes your sides hurt from laughing so much.

Tom Wilkinson and Stephen Dillane are also delightful. Joanne Whalley doesn’t make much of an impact due to her role not being that large.

44 Inch Chest had a chance to be very good, but aside from the acting, its not.