“You are different. I am different as well.”

I hate boring movies. By boring I mean movies that regurgitate the same chum that we’ve seen countless times before. Flat, stereotyped characters. Action movies in which each scene tries to outdo the last one in sheer ridiculousness. Comedies that cut to the lowest common denominator. Our culture is flooded with those types of movies, and frankly, I’m sick of it. And don’t get me started on sequels or remakes that just copy the original movie. I want some originality. I want something different that I haven’t seen before. Something a little weird, twisted. Is this too much to ask for? I think not, and thankfully, The Skin I Live In fits that bill, perfectly.

Sure, it has the twisted, almost grotesque qualities of a Cronenberg film. And Almodovar’s latest film looks like all his other movies. It is also based on a book, not to mention the fact that the film’s visual style echos something made in the 1960’s but with modern production values. Regardless of all these similarities to things we’ve seen before, The Skin I Live In is something new and exciting. Trust me on this one. First it has a very shocking plot, made all the more shocking by the way the film is unconventionally structured. It’s a weird back and forth and then sideways and upside down timeline. It might sound confusing, but it’s not. Each twist is unwrapped at the exact right time, and had the plot been chronologically structured, the reveal of these twists would end up being less meaningful and the movie would have been less enjoyable. The film even litters the story with tiny clues to help the insightful viewer piece everything together. It’s a movie that may be too weird and shocking for mainstream audiences, but that’s just what the doctor ordered to keep our minds off of Battleship.

Story: Robert Ledgard is a world-renown plastic surgeon at the top of his profession. His past, though, is anything but perfect. His deceased wife had been severely burned, and now he spends all his time trying to create an artificial skin that would prevent such burns. He puts his career on the line, risking everything in this relentless pursuit by testing on a mysterious woman. Will he finally be able to finish his work and put his past behind him, or is the source of his obsession not as straight-forward as it initially seemed?….Good (24/25)

Acting: Antonio Banderas takes the helm here as Ledgard in the kind of role that we rarely see him in. Never once do you question the character’s enigma. It’s a strong performance and the person that Banderas creates is thankfully not as straight-forward as he seems. Elena Anaya plays Ledgard’s mysterious female patient, and her character is arguably even more complex than Baderas’. She does a great job and is arguably the most fascinating part of the film. The rest of the cast is also very good. There are a wide variety of characters here, and the diversity makes the film feel genuine. Good (23/25)

Direction: Pedro Almodovar wrote and directed. He is a veteran of Latin films and his professionalism is written all over every scene. The non-traditional structure, crisp visuals, bright-but-not-cheery tone, and plethora of complex characters would have fallen apart in the hands of a lesser artist. I call him an artist because that is what he does here. Without the high production values and the notable cast members this movie would make an excellent art-house film. Even though it is bright, colorful, and festive the movie is not a party. It’s dark, gloomy, and depressing. That fact alone should be proof enough that Almodovar knows what he is doing. Good (24/25)

Special Effects/X-Factor: Never does the movie compromise itself with lack of visual stimulation. The fact that the movie is successful when it contrasts its festive visuals with a mostly depressing story is the best example of what this movie is trying to accomplish. Everything is not as it seems. That’s a quality of a good movie, a movie that is not predictable. It’s a breath of fresh air and even though the film might have its odd or even revolting moments, it is altogether entertaining to behold. Good (24/25)

Summary: Thrilling to behold, frightening to think about. 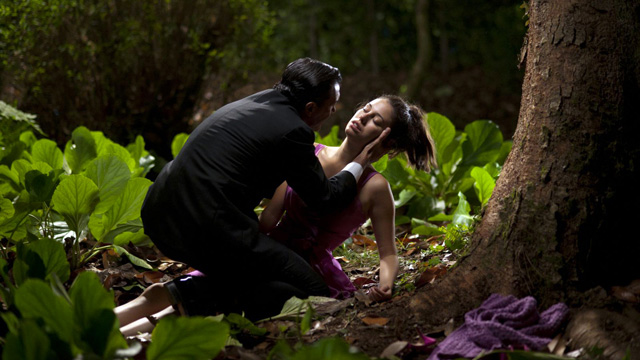