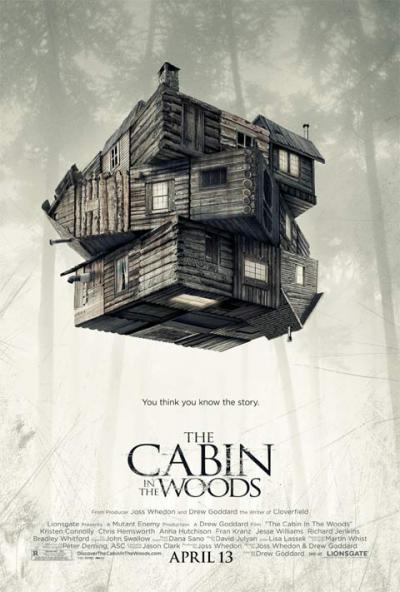 “I seriously believe something weird is going on.”

To be honest it never occurred to me that a unicorn could be in a horror film. Cabin in the Woods proves me wrong. A blood-thirsty rampaging unicorn bent on murder is actually quite frightening. Maybe its a sign that they’re finally trying something new, but it could also mean that they are running out of ideas. If you recall, we had the same feelings 6 years ago with Snakes on a Plane, and we all know how well that one turned out. Cabin in the Woods, thankfully, tones down the silly and fills in the void by pumping up the sense of impending doom. It plays off all the other horrible cliched horror films we’ve seen before, so you end up just waiting for something bad to happen. But when it does, it doesn’t stop. It becomes a pure B-movie gore-fest, and like the unicorn, you don’t know whether you should be gouging out your eyes or laughing hysterically.

Credit the over-the-top creativity to writer/nerd-guru Joss Whedon. It’s not so much that the film veers off the beaten path, but buries landmines along the way. It’s an interesting no-regards technique that above all is entertaining, but leaves something to be desired. It’s a hollow movie, blowing up any fiber that it might have had for the sake of cheap thrills. It doesn’t help that it isn’t put together very well either. I think the biggest problem is that the film feels short. Maybe we’re getting spoiled with the way new movies all seem to be pushing past 2 hours, but the film hits its stride only 15 minutes before the end. The film starts slow and ends fast, almost abruptly. It’s almost like the writers were so confident in their twist at the end that they were rushing to get there, trying to catch up after spending so much time setting up the facade of the cliched horror film at the beginning. Plus I wouldn’t necessarily call it smart either; they drop hints along the way such that if you don’t know how the movie ends before it actually does you weren’t really paying attention. Therefore, you have a film that goes completely off its rockers, but in doing so it left solid ground way behind. Entertaining? Yes, but questionably so.

Story: A group of college kids are headed up to a remote cabin in the woods to get away from it all. They’re looking for a good time, and it seems that this is the perfect place to have it. Unfortunately, this cabin isn’t all that it seems. A secret organization is watching them, and manipulating them for their own purposes. Of course, it’s not apparent to the kids until it’s too late. Can they find out what is happening to them before it is too late?…Good (20/25)

Acting: The movie doesn’t really have a strong lead, but the majority of the screen time is devoted to Kristen Connolley as one of the college kids simply because she lives longest. Chris Hemsworth makes a questionable appearance as one of the college kids too. But besides those two, the cast is comprised of mostly unknowns, which is okay, because all they have to do is run and scream. Therefore if you are satisfied with people looking scared while drenched in blood you won’t be disappointed. But if you’re looking for real drama or characters beyond forced cardboard stereotypes look elsewhere. Okay (16/25)

Direction: Drew Goddard is a first-time director. His only other credit is as writer of Cloverfield, so there’s not much to go on. The film feels stiff, but maybe that’s just the acting. The most interesting structural aspect of the film is the way that Goddard tries to weave two competing story lines, one which is almost like a “behind-the-scenes” of the other, and almost pulls it off. One half of the film plays off of horror film stereotypes, and is dark, gloomy, and claustrophobic. The other part of the film is purposefully more open, bright, and airy. The two “sides” of the film aren’t really blended together well, which makes it obvious where the film is headed. But the contrast does keep you from getting too bogged down in the film’s less-than-original plot devices and helps to remind that you’re supposed to take it all as tongue-in-cheek. Okay (18/25)

Special Effects/X-Factor: If you like bloodbaths, you won’t be disappointed. I don’t think there has been a film with this much blood in it since it came roaring down the hallways in The Shining. Overall the film has a distinct B-movie feel, so even if some of the effects are not stellar they definitely aren’t a let down. I’d go as far to say that the camp enhances the film. The trouble, then, is putting a finger on what makes this movie really special. It’s a mish-mash of things and ideas we’ve seen elsewhere, but the way the plot literally hacks it all together in the end is at least fun to watch. Good (22/25)

Summary: More thrills than what is typical in this genre, but it’s not as monumental an achievement as it pretends to be.