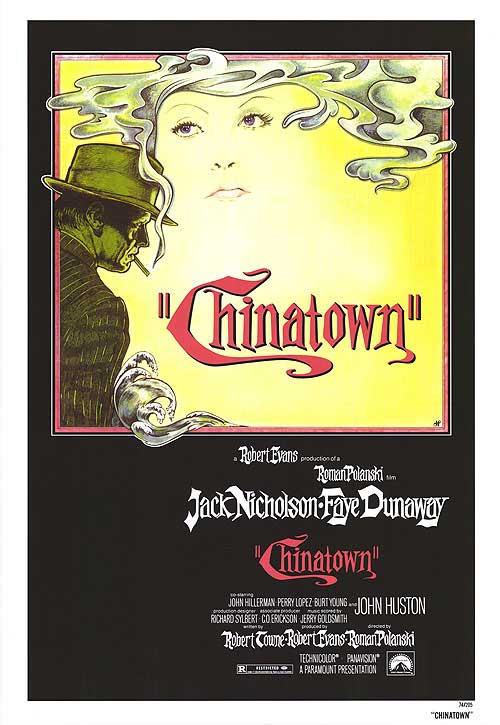 It’s all about the intrigue. That’s what a good detective movie needs, and that’s what Chinatown delivers. Chinatown is Roman Polanski’s critically acclaimed take on 1940’s film noir. It’s got a witty veteran detective as its lead character, a spiraling plot with shady dealings, and of course dames in distress. Set in late 1930’s Los Angeles, the story is brimming with enough historical accuracy and charm that if the film were not in color you’d have thought you were actually watching a 40’s film noir. But this isn’t just another movie trying to play homage to the gritty golden years of Hollywood; Chinatown is Polanski’s honest effort to add to the genre. It’s not a gimmick. He succeeds.

Very few other directors could have pulled it off. Polanski is a no-nonsense director. His films are serious, and in this case, that seriousness pays off. It is his focus and drive that help the movie stay on track. The excitement from a good detective film comes from piecing together the clues. The problem is that such a story needs to walk a fine line between being easy to follow and intellectually challenging. Too often do films now a days interpret this to mean that witty action will suffice. Chinatown doesn’t have witty action. In fact, it doesn’t have much action at all. The excitement comes from the well written and well constructed story. This is where Polanski’s creativity is really beneficial. The story is so well written that you just might take it for granted since it seems generic. But it isn’t. This is a story that finds that fine line between teasing and enticing your brain and then stays there. Consistency is king.

Story: J.J. Gittes is a private detective who specializes in finding proof of infidelity in other people’s marriages. When the wife of an important government official visits him for his services, Gittes at first assumes that it’s just another job. But as his investigation continues the real mystery unravels. The evidence Gittes uncovers of the man’s supposed infidelity ends up in the newspaper, an obvious ploy to sway public opinion again the man. And then a woman appears who claims to be the man’s real wife. Gittes was set up, and now he has to figure out why before they can shut him up….Great (25/25)

Acting: Jack Nicholson plays J.J. Gittes, and his performance here is one of the highlights of his career. He is believably restrained and is simply interesting to watch due to his character’s steely resolve. His performance here is one that really put him on the map as a talented actor, and the film owes much to his talents. Opposite Nicholson is Faye Dunaway, who plays a commanding and emotionally powerful woman. Her performance is strong even if she is difficult to understand at times. Thankfully, the rest of the actors in this film also create memorable and detailed personas. These people feel real and they add to the overall style of the film. Good (24/25)

Direction:Roman Polansk’s work here proves his talent. The entire film is expertly crafted, but it doesn’t feel that way. It flows naturally without ever losing its focus. Polanski’s dedication and sense of restraint are what really helps. This film is not overly stylish, edgy, or trying to woo you with visual flair. It is relatively simple, straight forward, and carefully pieced together. The result is perhaps not the most exciting movie out there, but one that nevertheless is a benchmark as far as technical proficiency and purposeful construction. Good (24/25)

Special Effects/X-Factor: The film doesn’t have a lot of action, but it has plenty things that are visually interesting. The film takes place in the 1930’s, and the crew did a very good job portraying life in Los Angeles at that time. The cars, the scenery, the costumes, and the backdrops are all very realistic and convincing-looking without feeling overly stylish or forced. The film also sports one of the most well-received scores of all time. The biggest problem with the movie, in fact, is that it is so perfect and polished. It just doesn’t have that edge, that sense that its pushing the boundaries of what film can do. Despite being just as good as other historical films such as The Godfather, it doesn’t feel long it belongs in the same company. Good (22/25)

Summary: All the pieces fit together brilliantly. 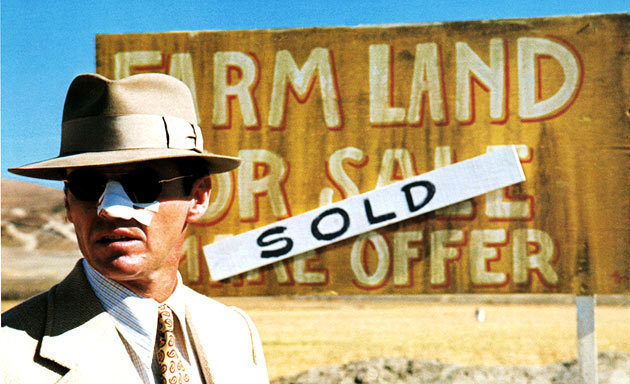