Crazy on the Outside

When a movie has an all-star cast, it doesn’t always mean that it will be a good movie. Valentine’s Day is a very good example. Even though this romcom (romance-comedy) had a long list of big profile stars in it, most critics thought it stunk worse than a bottle of expired milk.

Crazy on the Outside is another movie that falls into the loaded-lineup trap. It stars TV sitcom superstar Tim Allen, Sigourney Weaver, Ray Liotta and fellow famous TV sitcom funny man Kelsey Grammer along with a lot of other very familiar faces.

Tommy (Allen) is finally getting out of prison after serving 3 years for selling bootleg movies. His white-lie telling sister Vicky (Weaver) and her over-sexed husband Ed (J.K. Simmons) have agreed to let him stay with them and their teenage kids along with Vicky and Tommy’s grandma, until he can get back on his feet.

It is not long before Tommy’s “partner in crime” Gray (Liotta) shows up and wants him to rejoin his black-market movie business. Gray offers fast cars, even faster women and stacks of cash.

Tommy’s dream though is to restart his Dad’s old painting business. In the meantime, Tommy’s probation officer Angela (Jeanne Tripplehorn) gets him a job at Pirate Burger, a fast-food joint that would even make Ronald McDonald shake his head.

While at work looking ridiculous dressed up as a pirate, Tommy sees his ex-girlfriend Christy (Julie Bowen, TV’s Modern Family) at the drive-thur window. Vicky had told Tommy that Christy was dead. Do you get the idea that Vicky never liked Christy? After Tommy tracks down Christy, they rekindle their steamy relationship. There is just one BIG problem. Christy is engaged to an electronics salesman named Frank (Grammer). 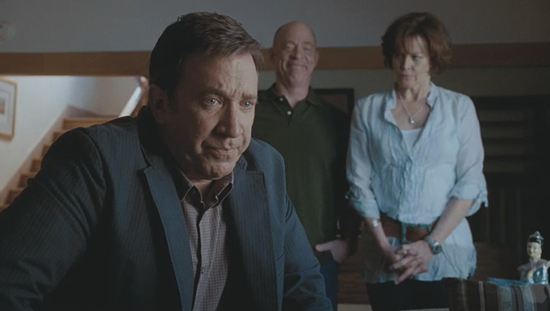 Crazy on the Outsideis Tim Allen’s first time directing a movie. Hopefully, IF he gets another chance, he’ll do a much better job than this laugh-less comedy.

Tommy has one or two mildly funny one-liners and grandma (Helen Slayton-Hughes) gives us a few chuckles, but otherwise there is nothing funny about this movie.

This “supposed” comedy was written by Judd Pillot and John Peaslee of TV’s According to Jim. That is entertaining, this is not.

Even though Tommy’s manager (Robert Baker, Leatherheads) at Pirate Burger is a dork and Tommy’s two coworkers, Edgar (Jon Gries, Taken) and Rick (Malcolm Goodwin, American Gangster) are doofuses, these scenes make you roll your eyes because there so lame.

Tommy goes on and on about how much he loves Christy, but yet when he finds out she is taken, he seemingly gets over her pretty fast and starts a relationship with Angela. It is not just dumb, but isn’t that against the rules???

Angela’s son Ethan (Kenton Duty) is not only pathetic because he tries to set-up his mom with an ex-con, but his personality is annoying like that bug that keeps landing on your hamburger during a summer picnic.

J.K. Simmons character is more creepy than funny. It reminded me of Vern Schillinger, his Nazi-character from the prison drama Oz, who’d rape any young inmate that he could.

I would have loved to have seen more of Kelsey Grammer and Ray Liotta. If these two extremely talented actors would have had bigger roles, it would have definitely made this a much better movie.

Despite the fact that Sigourney Weaver’s material is not that great, she still shows you why she is one of Hollywood’s most respected actresses.

If you’re in the mood to laugh-out-loud, then Crazy on the Outside is not for you.

Crazy on the Outside is currently available on DVD.

Back to the Future 25th Anniversary