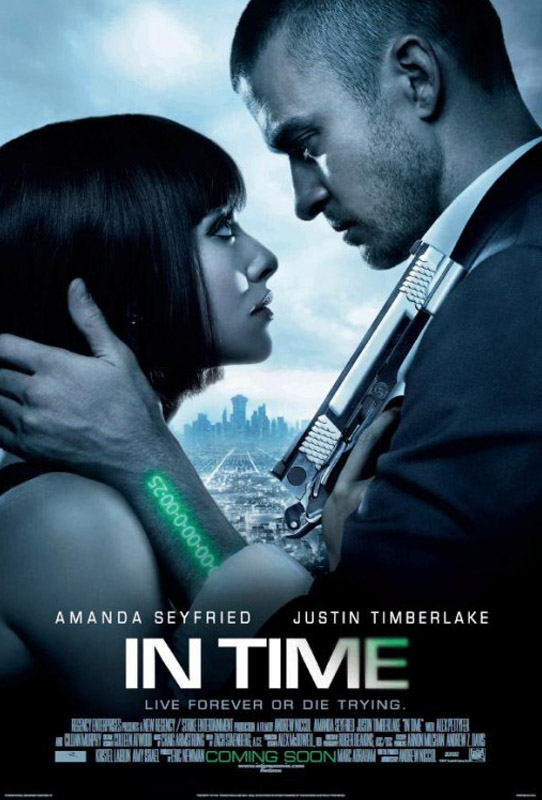 “For a few to remain immortal, many must die.”

In Time seems like a good idea, even if the basic premise came from Crank. Your characters are human wind-up toys who must continuously recharge themselves less they run out of juice. The fear of running out of juice causes them to do questionable and exceedingly dangerous things. Milk out as much excitement as possible from these reckless endeavors and you’ve got the basis for an action film.  Next, wrap it up into a seemingly high-brow dystopian science-fiction setting, one that parodies recent real-life social trends and you’ve got some sort of story to back up the mindless action. Oh, and since it’s science fiction, you can get away with adding an additional twist that all the characters are young and will never age. This means you can cast popular up-and-coming actors in your movie for both eye-candy purposes as well as catering to the iGeneration. Presto! There you have it. A witty, action-packed film with a relatable story, one with plenty of appeal to men and women of all ages.

Wrong. In Time, as it turns out, was not a good idea. It is the epiphany of Hollywood’s latest ploy to suck money out of your pocket. Sure the premise is interesting, but you’d have to be a brainless zombie in order for it to make sense. And the relationship to recent social events? A rather half-hearted and weak ploy to tug at the audience’s supposed allegiance to the 99% movement (which is ironic given the film’s clear purpose is to above all make tons of money). And then there’s the acting. Its terrible. Unfortunately, that isn’t even the worst part. The worst part is the script. All attempts to be witty are little more than endless cringe-inducing puns. I hope this is a joke by the writers, trying to see how much they can get away with.

Therefore, In Time follows Surrogates and Equilibrium as films that Hollywood tried to do something different with, but ended up making the same mistakes that they always do. Movies that are obvious ploys to make a profit may be good for the economy, but they sure do strike a blow to our ingenuity and culture. 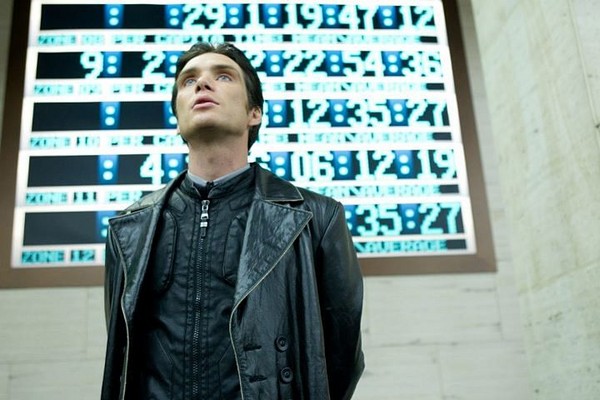 Story: It’s the future and humanity has been bio-engineered so that we don’t age past 25. The problem is, that with resources being scarce, you now have to earn time to keep on living past 25. Time is the new currency, and you keep track of it on a fancy clock embedded in your wrist. Will Salas is a normal guy, literally living day-to-day and helping to provide for his mother. When a mysterious man arrives in town with more than a hundred years on his arm, Will gets to thinking that man is not meant to live this way…Bad (14/25)

Acting: Maybe Justin Timberlake can only act on SNL or when he is playing a pompous ass, but here his acting is weak. His character’s motives seem forced, unnatural, and insincere. Perhaps its because the film’s premise doesn’t really make sense in the first place and creating a character in a world that doesn’t make sense is not easy to do. Amanda Seyfried is pretty much a lame duck. Her character is emotionless and stiff, and has no chemistry with Timberlake at all. Cillian Murphy is supposed to be the tough-guy cop, but again the lack of meaningful motivation behind his character sabotages his efforts. The rest of the cast is as robotic and unconnected as its stars. Bad (13/25)

Direction: Andrew Niccol tries to inject as much style and flash into the story as he can. For sure he succeeds in making this a stylish film, but it also feels cheap. I’m not sure if poor production values are to blame, but the way the action is spliced together makes it seem like there’s something missing. Rather than pull back and let the viewer make sense of what they want to focus on, Niccol forces his view point on the audience which gives the film a rushed, patched-together feel. Okay (16/25)

Special Effects: The time counters and other digital projections that the film is embedded with all look really good. The rest of the film? Not so much. Like Equilibrium, the film makers decided to use old things and make them look futuristic rather than create their own unique sets and props for the film. Therefore, if you like 60’s Muscle cars you’ll be happy, but the rest of us all expect a little more eye candy, especially considering the impressive amount of advanced technology it would seemingly take to make all of mankind stop aging at 25. Okay (17/25)