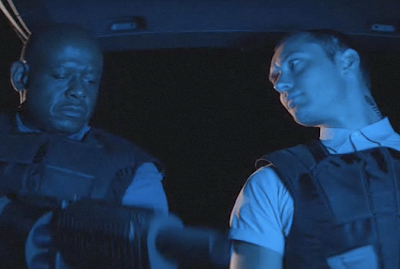 Repo Men is a grisly and gruesome sci-fi flick that stars Jude Law and Forest Whitaker as two repossession agents. If you can’t pay your bill, they won’t take away your car or your house, they’ll take your heart or your lungs or your kidneys! Literally!!

Repo Men is based on Eric Garcia’s 2009 novel The Repossession Mambo. He is known for his popular Rex series about dinosaurs and his 2003 book Matchstick Men, which were both turned into movies as well. Garcia co-wrote the screenplay for Repo Men with TV writer/producer Garrett Lerner (House M.D.)

Set in the not-so-distant future, if a person is in need of an organ transplant, instead of getting on a list, they can just buy an artificial organ or “Artiforgs” as there called. The best manufacturer of “Artiforgs” is The Union. The problem is they charge very high prices for their products, but they do have installment plans, that charge even higher interest rates.

If you fall behind on your payments, The Union, managed by a smooth-talking ghoul named Frank (Liev Schreiber, X-Men Origins: Wolverine), will send out either Remy (Law) or Jake (Whitaker), their two best repo men, to collect their property.

One night while out on a routine repo assignment that goes bad, Remy falls into a coma and when he wakes up, he is the new recipient of one of The Union’s  top-of-line artificial hearts. When his payments are late, Frank sends out Jake to repossess Remy’s heart. Forced to go on the run, Remy fights to survive, while also looking to bring an end to The Union’s ruthless ways.

Repo Men relies too much on gore which is a complete turnoff. Remy and Jake spend most of their time hacking up people like their Michael Myers or Jason Voorhees. The ending scene, when Remy and his new girlfriend Beth (Alice Braga, I Am Legend) try to save themselves, employs a large amount of blood-letting that is just over-the-top and ridiculous.

There is also a highly-stylized action scene, in which Remy fights his way through his fellow repo men on his way to the grand computer at The Union’s headquarters, that involves a great deal of carnage that is more disgusting than delightful.

Forest Whitaker is an Oscar winning actor (The Last King Of Scotland) that seems horribly out of place in this sci-fi fiasco. His acting talent is barely utilized by rookie director Miguel Sapochnik. When Jake is not slashing someone open like Freddy Krueger, he is sitting around laughing like a lunatic. Forest Whitaker is too talented of an actor to be wasting his time and effort on such a forgettable film as this.

Jude Law was very entertaining in his last role as Dr. Watson in Sherlock Holmes, but here he does nothing to distinguish himself. Even though Remy changes from an emotionless piranha into a caring fighter for justice, you do not care about him because of his earlier actions.

Liev Schreiber is the most effective in his role as the profit-crazy manager. You want to see Frank get what he has coming because he is so arrogant and heartless. The villain is a role Schreiber is becoming a natural at playing since his most recent work has been that of a heel.

In an attempt to add extra spark to the story, there are two plot twist thrown into the mix. One is not overly surprising, but the other is clever enough to catch the viewer off guard and help give a boost to an otherwise disappointing film.

Poor book sales for The Repossession Mambo is the only reason I can think of as to why it would be included as part of the storyline of the movie. It is just a pitiful way by Garcia to plug his own work.

Sapochnik, Lerner and Garcia succeed in creating a high-energy, big-action movie, but they fail to develop characters or a story that would keep the attention of their audience. If there is anything that is seriously needing to be repo’ed, it is this dreadful movie.