Over its almost 50 year-long history, the James Bond franchise has gone through several revisions in order to adapt to the times. Perhaps the biggest revision was 2006’s Casino Royale, which could essentially be considered a “reboot”. It was controversial for audiences accustomed to the handsome dark-haired hero, stubbornly set in his ways as much as the producers who mindlessly followed the same formula for 40 years. Casino Royale proved that the series could still be relevant and that casting aside many of the series’ hallmarks was a good idea afterall, something that was all but frowned upon during original producer Albert Brocolli’s reign. Of course, you know that Hollywood rarely follows a good movie with another; so the question became would the sequel follow in Casino Royale’s footsteps trailblazing in a new direction, or would it play conservative by falling back on old traditions?

Curiously, Quantum of Solace is a little of both. Like Casino Royale, it feels gritty, as characters are actually portraited as human beings rather than flawless robots. James Bond is still growing into his job, rather than lounging around in it as Sean Connery did. On the other hand, Quantum of Solace feels similar to a Rodger Moore-era bond, without all the silly humor and offensive stereotypes. The film itself is shorter, to-the-point, with intense action scenes driving the story more than any real plot or character interest like in Casino Royale. Also, there is a return of the recognizable evil side, with henchmen and lackies that Casino Royale went without. Finally, Quantum of Solace does show a little originality by first-time-action-director Marc Forster, who makes the movie feel like a real spy thriller rather than another James bond movie with music-video-like edited action sequences, stylized locale titles, and a traditional opening title sequence without Bond’s trademark gun barrel. The result though is not a movie that is nearly as memorable or timeless as Casino Royale. Quantum of Solace’s purpose is to wrap up the loose ends of Casino Royale, and while it accomplishes this task, it does not have enough depth or originality to carry itself alone. 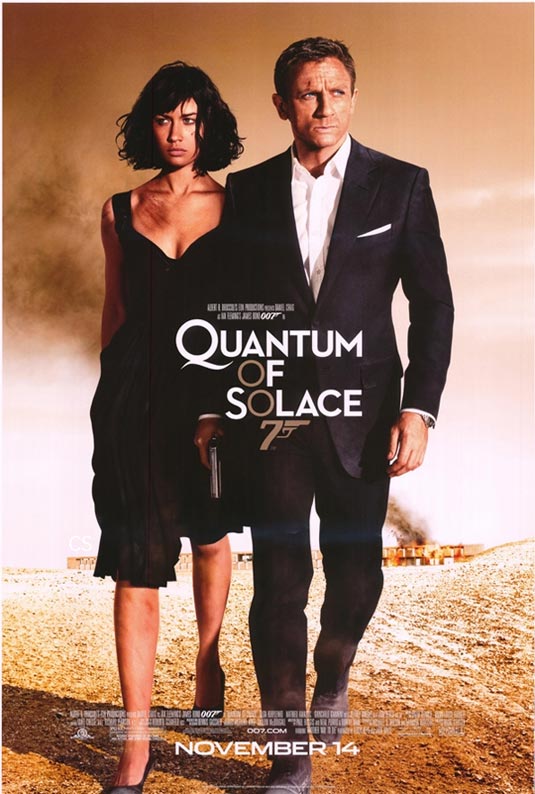 Synopsis: Eager to find the man responsible for making his beloved Vesper betray him, James Bond finds himself in another tangled mess of terrorists, double agents, and uncompromising superiors when his only lead escapes due to a terrorist agent infiltrated deeply into MI6. Now, more bent on revenge than ever, Bond ignores his orders and tries to straighten out the mess by himself. He is led to Greene, a wealthy buisinessman who appears benign, but later unveils a secret plan that Bond comes to realize is more important than his own personal vandetta. Now, joining forces with a fellow spy bent on a plan or revenge herself, Bond puts his resourcefulness to the test as he attempts to foil Greene and come to understand the importance of loyalty….