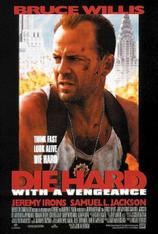 This film starts off with a bomb exploding in a department store building.  Right after the explosion occurs, a man named “Simon” (played by Jeremy Irons) calls the police department & orders Lieutenant John McClane (played by Bruce Willis) to wear a sign in downtown Harlem stating that he hates ******.  As he is about to get the stuffing beaten out of him by some outraged people, he is inadvertently saved by a shopkeeper named Zeus (played by Samuel L. Jackson).  In order to prevent any more bombs from going off, Simon forces John McClane & Zeus to play “Simon Says”.  Throughout the film, Simon calls them through different pay phones & plays cat & mouse games with them by giving them riddles & forcing them to solve different puzzles.  In other words, Simon basically is having fun by playing mind games with the entire NYPD & Zeus.  Just as Simon & Zeus solve one riddle, Simon gives them clues regarding the next one.

One aspect of the filmmaking which I thought was great was the acting.  The element I enjoyed about the acting in this film was the comedy bits which occur.  Unlike other buddy comedy films which involve cops like: 48 Hours, Lethal Weapon, Bad Boys, & Rush Hour, this film is not classified as a comedy.  One of the scenes which I thought was hysterical was when Zeus asks the lady to get off the phone but she won’t do it, so he grabs the phone from her & tells her to give him the damn phone.  The second scene occurs when John & Zeus are in the underground subway station when Zeus notices a gold bar.  He asks John if the gold is real & John says it is.  Zeus grabs a gold bar to which John tells him that he can’t take it with him.  Zeus tells him we’ll see about that.  The final scene which I thought was absolutely hilarious occurs when Zeus carjacks some guy & asks him for directions, to which the guy tells Zeus to go **** himself.  Back inside the car, Zeus discovers that somebody stole his gold bar.

My recommendation is that I loved this film more than I thought I would.  In fact, I would rank this as one of my top ten all time favorite films.  I like how Director John McTiernan decided to add bits of comedy into this film, as it would have been boring being only action.  I also like how he decided to make the Simon character similar to the Riddler character from Batman.  I actually the Simon character as he was able to toy with the NYPD through various mind games & riddles.  It’s too bad that Samuel L. Jackson did not reprise his character in the final installment of the series, Live Free or Die Hard.