I’m back! And arguably better than ever. I’ve revitalized my review format yet again for easier reading to get you the facts you want to know quickly. The idea with this third generation of review format is that I will be able to review more movies than ever before while also keeping the signature style and depth you expect from my reviews that sets me apart from my peers.

As a review, and for those of you not familiar with GSP (it has been over a year since my last review!) I rate all my movies on a scale of 0-100 and assign a letter grade that is interpreted as follows;

And now….for the actual review you were looking for: 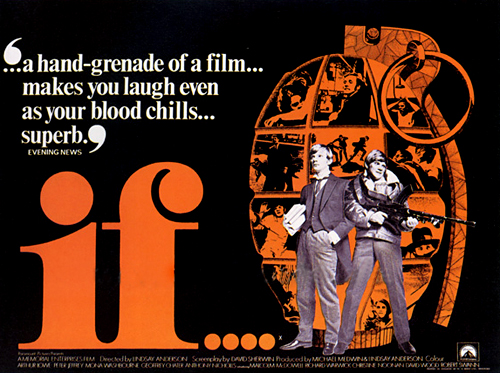 “One man can change the world with a bullet in the right place.”

While A Clockwork Orange is generally credited as one of the first films to shock audiences with its violence and vulgarity, If… officially laid the groundwork to make that possible. If… presents the audience with a shocking account of a group of young individuals acting out against a structured society. Granted, A Clockwork Orange takes this idea to a totally different level, but If… is groundbreaking in the way that it portrays the main characters as heroes.. Everything in the movie is about contrast; the mixture of black and white with color throughout, the mixture of surrealism with realism, the setting in an old boarding school, glorification of both religion and war at the same time. All of this makes a movie that is a perfect representation of the feelings and sentiments of the late 1960’s. 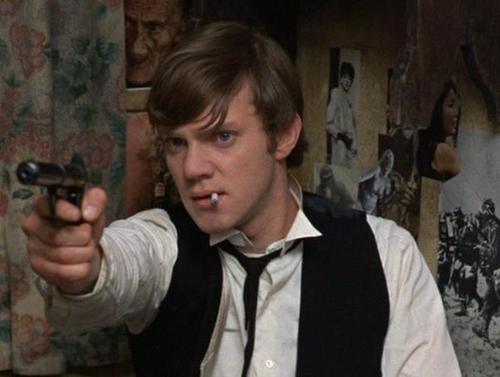 Story: Mick Travis is a rebellious teen, sent away to an English boarding school. The films starts as the boys are returning to the school for the beginning of the term. As normal day-to-day life progresses the ins and outs of the school are revealed, creating a structure by which all the students are confined. Eventually though, Mick and his friends become tired of these traditions and begin looking for ways to break free… Good (21/25)

Acting: Speaking of A Clockwork Orange…look who it is! Its Malcolm McDowell! If there is one thing that Malcolm McDowell is known for, it is for playing subversive characters (or bad guys), and this is no exception. Here McDowell finds his roots and portrays the type of cool anti-hero that actually makes you believe in him. Oh yeah, and the rest of the cast shines too. Good (22/25)

Direction: Director Lindsay Anderson creates a masterpiece of movie direction. The movie starts off in a very conventional manner. Everything is structured, long scenes, the story is simple, and the characters seem normal. And then….random scenes in black and white, dream-like imagery, short spastic cuts, characters out of control, and BAM! story spiraling towards disaster. This structure that Anderson builds and then destroys with his direction echos the themes and the purpose of the film. Great (25/25)

Special Effects/X-Factor: There aren’t many special effects in this movie, but there is a ton of bad-ass attitude (or should that be tonne?). The movie makes a mark as a perfect example of 60’s style fight-the-man film making. Good (22/25) 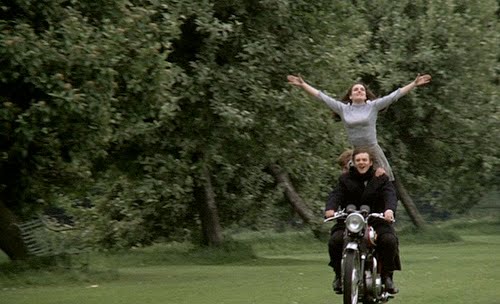