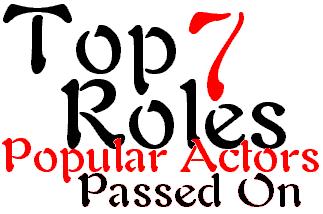 7. Sean Connery turned down the role of Gandalf in Lord of the Rings trilogy because of the 18 month shooting schedule was too long. So of course instead they went with Sir Ian McKellan who owned the role.

6. Daryl Hannah and Molly Ringwald both turned down the role of the hooker, Vivian, In the smash hit, Pretty Woman. Daryl thought it was too degrading to women. (Although, she later played a stripper in Dancing at the Blue Iguana.)

5. Thank God, Kevin Costner turned down the role of Bill in Quentin Tarantino’s Kill Bill vol. I and II. Instead Mr. Costner choose to do the movie Open Range?

4. Who can see John Cusack  as John Bender in the Breakfast Club? He turned down the role because of scheduling conflicts so instead they went with Judd Nelson. Good call.

3. Did you know Bruce Willis turned down the lead in Ghost? He would have played opposite his now ex-wife, Demi Moore. But, he said that “playing a ghost would be detrimental to his career.” Ironically, he later played a ghost in The Sixth Sense.

2. Believe it or not Will Smith passed on the role of Neo in the Matrix! Guess who else did? Ewan McGregor! Smith later admitted after seeing the movie that he thinks he would’ve messed the role up. Instead of course they went with Keanu Reeves and the rest is history.

1. Al Pacino, Nick Nolte and Christopher Walken were all considered for the role of Han Solo. Even harder to imagine, supposedly Burt Reynolds turned down the role. Nobody could’ve did it like Harrison Ford. We can only imagine who they where gonna get for Luke and Leia…Donny and Marie Osmonds?

Shaun of the Dead…