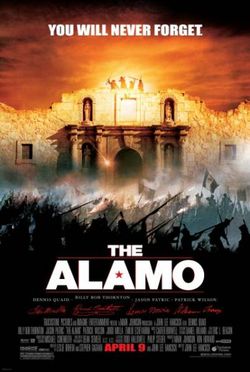 So I have to give this movie at least one and a half stars for effort and star power; featuring actors such as Dennis Quaid and Billy Bob Thorton. In all honesty though, I think this movie was a waste of celluloid and of very gifted actors.

So to be brief and avoid copious unnecessary details I’ll say that this movie was about the fight between the Americans and the Spanish army for the state of Texas. This battle starts at a walled fortress called The Alamo (which was originally a religious establishment, but later became a sort of fort due to its local and amenities. David Crockett (Billy Bob Thorton) becomes involved as a result of Sam Houston (Dennis Quaid) telling him of the availability of land in Texas and that everything was plentiful. As a result of this information David Crockett alights in Texas just as the battle is beginning, and is thrust into service for American armies.

Although David Crockett (Thorton) has a protagonist role in this story he is not the chief trajectory of this bloody battle. The Larger picture is encompassed by the presence of Commander Sam Houston on the American side and Santa Anna (Emillio Echevarria) on the Spanish flank. Sam Houston waits for Santa Anna to come to him while appearing to retreat; waiting for the Spanish armies to disseminate so as to attack Santa Anna when he is not so thoroughly equipped.

As I stated at the start of this article, I believe that this film was a waste of time, money, and great actors. I just am not convinced by Dennis Quaid’s accent, nor his facade of ruggedness that he dons in this film. However Billy Bob embodied his role perfectly, I just wish they didn’t make the movie how they did.

I would vehemently admonish you to skip this film.