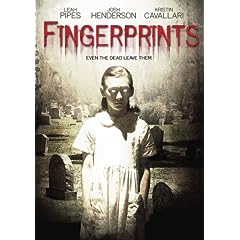 Winner of the 2006 New York City Horror Film Festival Best Feature Award, the horror movie “Fingerprints” had the right amount of “spooky” combined with “slasher” to keep me interested and on the edge of my seat wondering, “whodunit?” without completing grossing me out.  The main characters are portrayed by recognizable “B-list” actors including Leah Pipes (“Sorority Row”) as Melanie, the troubled girl with a past, Kristin Cavallari (“Laguna Beach: The Real Orange County”) as Crystal, Melanie’s blonde, cheerleader sister, and Andrew Lawrence (Brotherly Love) as Mitch the town bad boy.  Lou Diamond Phillips, Geoffrey Lewis and Sally Kirkland have supporting roles.

Melanie used to do drugs with her boyfriend, Shawn.  One day, Shawn convinced her to try heroin and the results weren’t pretty.  She lived. He didn’t.  While Melanie was in rehab, her father was transferred to Emerald to work on a turnpike project, so the family moved away..  As Crystal drives Melanie to their new home, she tells Melanie the town’s history and how the train depot is rumored to be haunted after a school bus was hit by a train in 1957 and several children killed in the wreck.  According to legend, the ghosts of the dead children will push a car parked in neutral on the railroad tracks out of danger and leave behind fingerprints.  But what the girls don’t know is the accident in 1957 didn’t happen exactly as they were told.  On her first night back, Crystal takes Melanie out to a party, where they meet Mitch and Penn (Josh Henderson), who take them to the old train depot in the middle of the night to see if the ghosts will move the car.  As a train bears down on the four teenagers, Melanie sees a little girl on the tracks and later tries to follow her into the train depot. The other teenagers stop her, but the next day, she returns to the train depot after school to investigate.  Later in the week, Melanie sees the little girl again and eventually learns her name is Julie Pearl, a victim of the 1957 accident and the daughter of the train depot manager, who died a few weeks after his daughter.  While investigating Julie Pearl’s death, Melanie is unaware that people are being killed by a mysterious figure wearing a vintage conductor’s uniform and white gloves.  Eventually, Melanie discovers the truth about the accident in 1957 while confronting the killer in the white gloves and conductor uniform.

Melanie’s interactions with her parents aren’t believable.  At the beginning of the movie when Melanie returns home from rehab, her dad runs out to greet her and hug her, but her mom stands on the porch in high heels with her arms crossed.  I thought the mother’s attitude towards her child, who has a drug addiction problem and nearly died from an overdose, was scarier than the ghost story portion of the movie.  With a mother like that, I’d do drugs, too.

The movie started off well, but about halfway throught started getting confusing from time to time and I felt like the story was being rushed to meet a time restriction.  Melanie’s visit to the police department seemed out of proportion to the rest of the movie.  When the police officers picked Melanie up to talk to her, they mentioned that Mitch had disappeared.  Then at the station when they asked Melanie why she thought she was there, and she told them because they thought she had something to do with Mitch disappearing.  “How do you know about that?” they asked.  “You told me at the cemetary.”, Melanie replied.  I know horror movies like to make law enforcement look like idiots, but this scene went a little too far.  This is the only scene with the police, so maybe if the movie had built up the ineptitude of the police department in advance, it would have been more believable and fit in better.

MRS. MAHAN SAYS: “Fingerprints” was a good movie to watch on a premium channel or to rent, but I wouldn’t purchase it for my DVD collection.  As a mother, I wouldn’t let a child under 13 watch because of the types of violence portrayed. 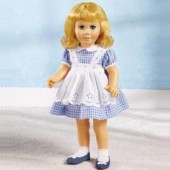 I notice misused words, mispellings, and poor grammar and I tend to point out these mistakes. Please don't take offens. Instead, accept the criticism as it is intended: to improve your writing skills. (I could have been an English teacher.)