Get Smart is a deeply flawed and disappointing movie, much in the same way that other TV show adaptation movies such as I Spy (2002) , Wild Wild West (1999), or Inspector Gadget (1999) were. In fact, I am not hesitant to say that Get Smart is probably the worst movie I’ve seen since having to watch XXX: State of the Union (2005). The problem is, like the other TV show adaptations, Get Smart lacks the basic characteristics that made the TV show great or at least memorable. Writers of these atrocities decide that they need to “adapt” the story to today’s world in order to make it memorable, only relating back to the original with references and names. The idea is that they have created something that will relate to both devoted fans and people who have never seen the show, but in reality (true) devoted fans will call blasphemy and people new to the show will just be confused and then disinterested.

That leaves people like me, not new to the show but also not that familiar. Immediately upon viewing the opening credits I could tell that this was going to be a bad movie. Choppy editing, poor pace, no character development, cliche after cliche, and acting suitable for a 1990’s Jackie Chan movie. As for its homage to the original TV show? Well all the main characters are there, in name if not in spirit; Some of the show’s original gadgets and props are present, in a museum; and there is some Mel Brooks-like witty comedy, maybe once or twice (the rest falls flat). Combined together, the only redeeming quality of this movie is Steve Carrell as Agent 86, who would have been perfect for the role had it not been so poorly defined by the writing (more about that later).

Synopsis: Maxwell Smart is a well-intentioned but inexperienced analyst for a top secret government program called CONTROL, which is tasked with espionage and counter terrorism by the US government. Countering CONTROL is KAOS, a terrorist faction left over from the Cold War. Max’s dream is to become a CONTROL agent and he gets his chance when KAOS compromises the identity of all of CONTROL’s agents, except Agent 99, who recently underwent facial reconstruction in order to get a new identity. Together they must put their differences aside in order to combat KAOS, or risk failure and the lives of millions. 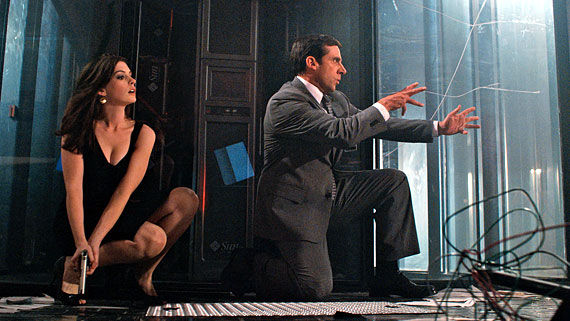 Acting: Steve Carell (TV’s The Office) plays Maxwell Smart, and on merit of what he is given to work with, does a good job. His personality is a good fit, and manages to make a few scenes pretty funny, however his character is poorly defined and this severely limits the potential of the movie. Anne Hathaway (The Devil Wears Prada) is merely there as Agent 99. Her character is lacking in development the most, so I’ll give her the benefit of the doubt, but there is little chemistry between her and Carell’s character. She just doesn’t seem to fit this type of role; she is sophisticated enough but does not seem comfortable at all. Alan Arkin (Little Miss Sunshine) is another bright spot in this abyss as The Chief, head of control. Like Carrel’s character, Arkin’s is poorly defined, but at least he manages to be funny a few times even if he doesn’t seem convincing at others. Dwayne Johnson (The Scorpion King) plays the tough guy, Agent 23, but is not very impressive. His character is full of cliches and stereotypes, and is only funny once or twice before disappearing for half the movie only to return as bland at the end. Terrance Stamp (Superman II) is type cast as Siegfried, head of KAOS, and is not funny or menacing at all. Dalip Singh (a wrestler from WWE) plays the main KAOS henchman, is typically typecast as such, and it is ironic that his role is more important in this movie than other characters from the show that only appear for the sake of appearing (especially towards the end). Thus, there are other minor characters with names imported from the TV show, but all of them fall back on childish humor and witless dialog rendering them instantly forgettable. (7/25)

Plot/Script: While the plot is easy enough to follow and doesn’t feel too long or short, this movie is severely lacking in solid dialog and character development. I am even more critical here because the TV show’s trademark blunt but witty dialog was its defining characteristic, and it is disappointing to see this movie fall back on low brow physical comedy and childish humor so much. The biggest problem though is how the characters are written. Maxwell Stark is defined vaguely at best. The audience has no idea if he is supposed to be clumsy, smart, stupid, well-intentioned, or even a good spy. Especially if you’ve never seen the TV show you get no idea from this movie the true nature of the character. There are so many moments where Max’s actions conflict with each other; for instance, he seems to aim well with a gun but is clumsy when shooting a blow dart? The same can be said about Agent 99. The writers give her a background story and that is basically it. The audience does not know if she is a good ( i.e. not incompetent) spy, serious, or even smart. It doesn’t help that she is randomly introduced at a pointless place in the movie and it is even more difficult to watch when the writers try to make you believe that she is a double agent. Overall, a very poorly written movie with only a handful of scenes/moments I would call funny or at least worthy of the original show.  (11/25)

Direction: Peter Segal (The Longest Yard) directs…and as I said earlier the movie lacks a good pace almost immediately. The editing is choppy and nothing really meshes, even the trademark opening doors sequence seems to be lacking drama. How hard is it to film someone walking through a bunch of doors and make it look convincing? However, Segal does a good job filming the action scenes, which although somewhat mediocre, are easy to follow and not drawn out. There is also a nice sequence towards the end of the film with a monologue by Max while he is on the phone which I thought not only was the best directed part of the movie but also the portion that seemed to evoke the spirit of the TV show the best. (12/25)

Special Effects/Music/X-Factor: The special effects, while not ground-breaking, were a mixed bag. Some sequences, such as a skydiving chase scene, looked great, while others, such as the opening door scenes and some of the final chase, were not convincing. Still, the original show was known for its campy qualities, and as such the cheesy door sequence could be considered a homage. Anyway, the varying quality of the special effects is a wash as this film has so many other, more obvious faults. The music also related back to the show at times, especially in the beginning and towards the end in the monologue sequence I described above. More music from the show could have helped though. Finally, the X-Factor of this movie is that although it fails to capture the spirit of the original , it makes an attempt. What sets it apart from similar TV to silver screen movies, most notably I Spy, is that it is a little goofier, but not geared towards children as much as Inspector Gadget was. (18/25)

What Kept Me Watching: Steve Carrel’s charm, a few good action scenes, and it is at least interesting to see what they did to try and modernize the classic TV show.

What Killed It: They tried and failed to modernize the original TV show; bleeding wit, charm, and chemistry in the process. The result is poorly defined/confusing characters, a cliche driven plot, choppy direction, and characters who contradict themselves in their actions.

Summary: Add another to the pile of failed attempts at recreating a classic TV show for modern theater audiences.