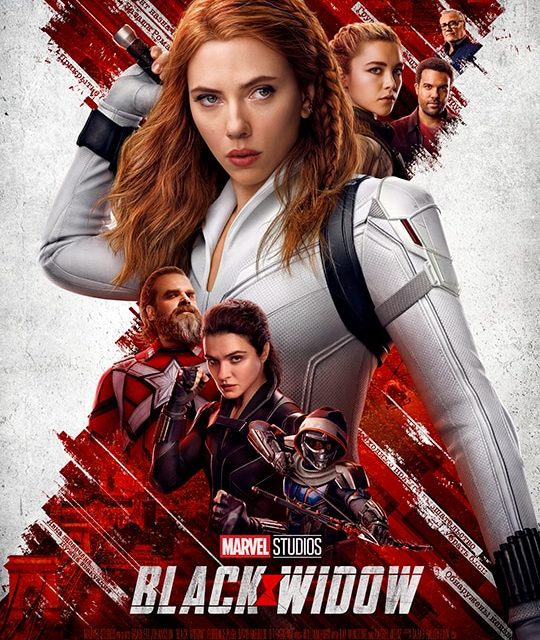 Phase 4 of the Marvel Cinematic Universe has started in a very character-focused direction. WandaVision (2021), Loki (2021), Falcon and the Winter Soldier (2021) television series’ have each done well to flesh out characters that may have not had the opportunity to develop. Black Widow, the first MCU film since Endgame tries to fill in the gaps of the first female Avenger.

Set in between Civil War and Infinity War, Natasha (Scarlett Johansson) on the run from General Ross comes across a package from her ‘sister’ Yelena Belova (Florence Pugh) who has newly defected from Russia. This package that threatens Dreykov’s (Ray Winstone) Black Widow program puts Natasha in the crosshairs of Taskmaster a Russian solider that can mimic any person’s moves. It takes reuniting with her first family: Yelena, Melina (Rachel Weisz) and Alexei (David Harbour) for Natasha to finally wipe the red from her ledger.

At first glance, it can seem odd to do a solo film on an avenger that sacrificed herself in Endgame. Unlike the MCU television series released this year BW cannot just pick up where the characters left off from the last Avenger film. However, what it does is deal with the trauma of Natasha’s past to make her character’s actions make more sense. Especially with her sacrifice in Endgame.

BW brings up a lot of elements of Natasha’s character from Avengers (2012). The polite acknowledgment of Natasha’s target giving her the information she needs with “Thank you for your cooperation” returns. Such as what had happened in the scene between Loki and Natasha. In one part of that scene when Loki tries to unnerve her by bringing up Dreykov’s daughter, BW uses this throwaway line to into a major plot point. Portraying one of Natasha’s darkest character moments using Dreykov’s child as a pawn to take out the man who took her childhood away. The ramifications of this violent act as part of Natasha’s defection to Shield leading to the evolvement of the Black Widow Program into its present-day iteration.

Natasha’s motivations in the MCU of wiping her red ledger clean in BW is used as a humorous scene between Yelena, Natasha, and their ‘dad’ Alexei. Alexei boasts about how proud he is of his girls happy to see how they grew up to be great assassins with “your ledgers must be dripping just gushing red”.

That interaction of Alexei talking like a proud embarrassing dad is telling of the theme of family featured in BW. Australian Director Cate Shortland expertly weaves the theme of family throughout BW. From the opening scene in Ohio 1995, Shortland sets up the comforts and happiness that the family unit was for Natasha. The playful and caring sisterly relationship of Yelena and Natasha. The motherly lessons Melina bestows on the girls “pain only makes us stronger” and the dorky but protective paternal role that Alexi played in their mission. When everyone does reunite everyone easily slips back into roles. Melina slips back into a motherly role telling Natasha to not hunch her back. Natasha herself has struggled with the concept of family, having thought her biological mother abandoned her she sought to fill that void first by believing in the Russian family living in Ohio and then her avengers family. She comes to realise by the end saying to Mason (O.T Fagbenle) “my whole life I thought I didn’t have any family turns out I have two”. Her Russian family is the one who raised her taught her how to ‘keep her heart’ despite the harshness of the red room whilst the Avengers became the family she chose, just as adults we choose our family from the close friends we make.

Another theme that is weaved into the narrative is female autonomy. The black widow program and the red room is only for women because Dreykov (like society) sees women as beings to take and use as he sees fit. In the title sequence, Malia J’s haunting cover of Nirvana’s Smells like Teen Spirit (apt song as it fits the setting of the opening scene) played over the trafficking of Yelena and Natasha and their subsequent training in the red room. The title sequence shows the constant training, they are put through on western cultural shows and the harsh weapons training. The cuts to the clinical rooms where they are given forced hysterectomy and that not everyone survives the process show. The audience a small snippet of the lack of control they were trained as.

Whilst Natasha was trained relentlessly to be a trained killer, Yelena and the current black widows experienced another level of control. The chemical manipulation that Dreykov employs is a tool for him to feed his ego and his need for control. You could see the chemical manipulation as an analogy for society’s way of conditioning women from an early age to adhere to the male-led society’s ideals of how women should behave. It is the black widows themselves (from the widow who stole the antidote and freed Yelena to Natasha and Melina) who take the power back for themselves, female allyship is the hero of BW.

The underlying feminist themes are why this film works today rather than in any of the previous 11 years that Natasha Romanov has been in the MCU. The explosion of the Me Too movement and the rights that feminism still tackles such as control over women’s bodies gives this film more profound weight in 2021.

The influence of the women can be felt in the script as well with actresses Johansson, Pugh with director Cate Shortland and writer Jac Schaffer. Only women could include a counter-argument to a man (in this case Alexei) commenting on a woman acting up is caused by her period. The joke being on Alexei, that as Yelena explains she does not get her period explaining to him about the forced hysterectomy ripping out her reproductive organs. Also, only a woman could produce a scene where two women excitedly talk about how awesome that a piece of clothing Yelena has bought comes with so many functioning pockets.

Black Widow is an action-packed film that gives Natasha the send-off she deserves. Pugh stands out as Yelena bringing in a nuanced emotion to Yelena in a way that does not diminish her prowess. The tied fight between Yelena and Natasha in Budapest sets up Yelena as the worthy heir to the title of the Black Widow in the MCU. Black Widow narrative neatly ties Natasha’s story up filling in the holes of her defection to Shield. The Taskmaster though not introduced as a hundred per cent comic book accurate. The twist on the character works with the feminist themes that BW is about. By the end of BW Natasha is set up in a place heading towards Infinity War and Endgame where her ledger is finally wiped clean.

hello everyone, I'm maddy, I'm from australia. I have had a passion for movies ever since i was a kid and I would watch star wars: return of the jedi over and over on vhs. I like to keep up to date on movie news and reviews by reading empire every month, i'm a little addicted to the magazine. I have alot of movies I love to watch over and over again just a few i would like to mention is gone with the wind, star wars ep1-6, Sabrina (the original), casablanca, the mask, the santa clause, bend it like beckam, iron man, australia, chaplin and many many more! other than movies i like to read books more particuarly star wars related books and biographies, one of my favourite books atm is Daisy Jones and The Six