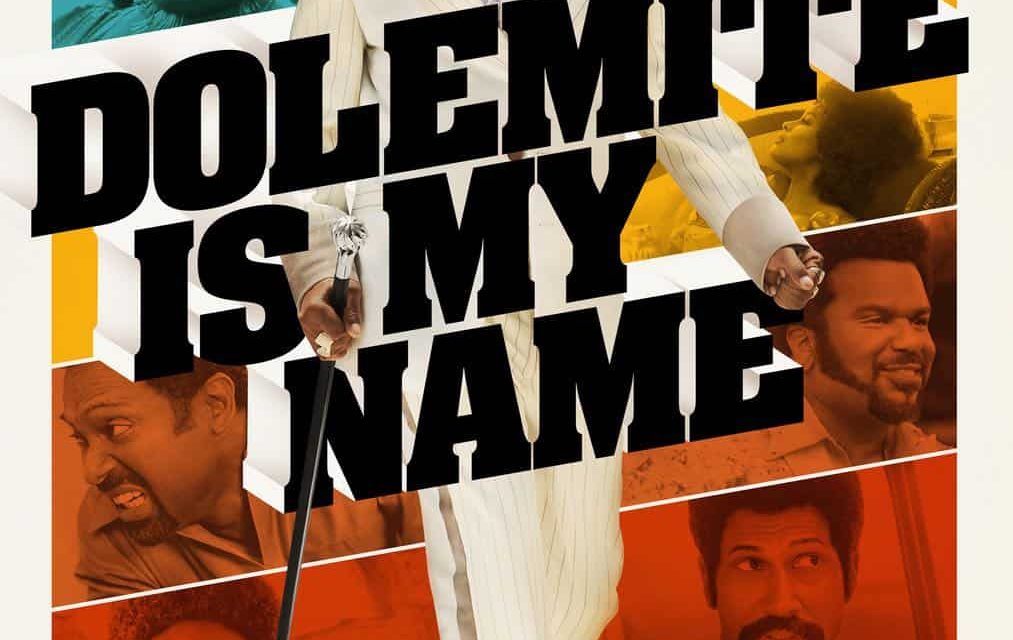 “Way down in the jungle deep, the lion step on the signified monkey’s feet.  The monkey said mother***ker can’t you see, you standing on my godd**n feet”.  If you are fortunate enough to have listened to this stanza of eloquent comedic poetry, then you have heard of Dolemite.  Yes, the character created by 1970’s comedic legend, Rudy Ray Moore, who brought blaxploitation films to the big screen like, The Human Tornado, Petey Wheatstraw, and Disco Godfather.   Eddie Murphy has brought a peek into the life of Moore in Netflix’s Dolemite Is My Name.  He gives us a glimpse of the man behind the legend.  A true a pioneer of his time; financing his own movies and albums when the only one that believed in him was himself.

Dolemite Is My Name tells of the struggles and obstacles Moore faced when he tried to “hit it big” as a singer, comedian and actor.  His commitment in believing in himself, flourish into an obscene Kung fu fighting alter ego and movie that smashed box office records becoming a blaxploitation film phenomenon.

Comedian extraordinaire/actor Eddie Murphy has proven to audiences that he has what it takes to be considered as a respected actor.  His roles in Dream Girls as James “Thunder” Early and Henry Church in Mr. Church has proven that.  But at times, when he tries to switch from comedy to drama within the same movie, his portrayals materialize as caricatures.  It loses its authenticity and unfortunately, it is evident in scenes throughout this film; where his voice and character is reminiscent of his Nutty Professor role as Sherman Klump.  But, ironically, when he is alone or with the wonderful actress Da’Vine Joy Randolph (Lady Reed), he is brilliant.  It is then we are reminded of his endless talent. You see that spark of his relentless dedication to his craft.

The acting excellence of Wesley Snipes is sometimes lost or just simply forgotten because most people see him as the vampire killing Blade from the self-title movie trilogy or the drug lord Nino Brown from New Jack City.  Added to the long list of forgotten actors of the 1990’s and early 2000’s, Snipes who got his start as the guy who wanted to know just how bad Michael Jackson was in the Bad music video really showcased his acting talents in To Wong Foo Thanks For Everything, Julie Newmar as Noxeema, and Flipper Purify in Jungle Fever.

Now, we can to add his portrayal as D’Urvill Martin, the semi-talented but over ambitious, drug addicted small film role actor to the aforementioned unforgettable characters. Snipes is both hilarious and invigorating, stealing every scene that he is in (even outshining Murphy).

Overall, Netflix’s release of Dolemite is My Name is very entertaining and takes you back to a time where African American actors in Hollywood had to hustle to get their names recognize.  The all-star cast including, Chris Rock, Snoop Dog, Tip “TI” Harris, and Craig Robinson (just to name a few) is full of surprises and laughter.  If you had the pleasure of watching Dolemite, the movie, then you will recognize the great cinematography with microphones appearing in scenes and the low budget special effects.  But, if you missed out on one of life’s great cinematic wonders or never heard of the comedic genius Rudy Ray Moore, you may question if the events in this film are true.  I promise, they are.  “Dolemite was his name and fuc**ng up mother***kers was his game.”  If you like blaxploitation films or want to laugh until your stomach hurts, then this one is for you.