Joker – No Joke at All 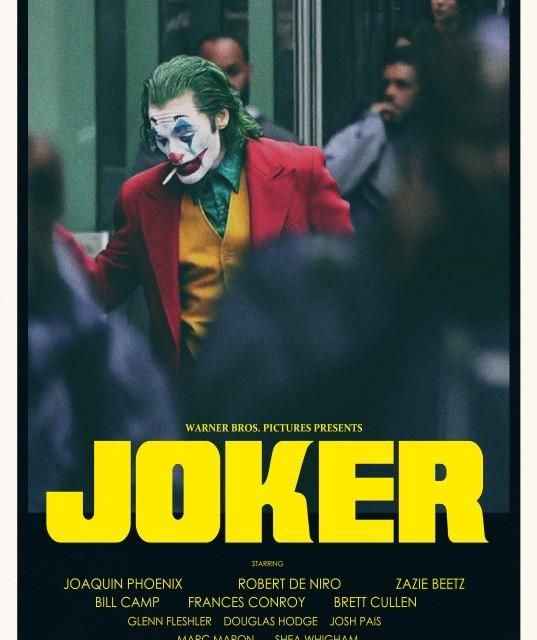 A joker is a person who does or says something to provoke laughter or cause amusement, as a witticism, a short and amusing anecdote, or a prankish act.  Even if, at times that act is brutal and causes harm or death to others.  This may explain the somewhat cult following or comic book fan base for Batman’s number one nemesis, the Joker.  The Joker has been portrayed by the great Caesar Romero as well as legendary Jack Nicholson who both were brilliant in the role, but their performances were more humorous than serious.  It was not until Heath Ledger’s astonishing work in The Dark Knight that we got a taste of the dark and disturbing maniacal mess of the fabled antihero.  But Joaquin Phoenix’s performance in Joker cements him as one of the best villains (if not the best) to grace the movie screen, ever – The G.O.A.T.

Phoenix portrays Arthur Fleck, a down on his luck stand-up comedian who makes ends meet by putting on a clown’s suit for the amusement of others.  He idealizes late-night talk show host Murray Franklin, Gotham’s version of Johnny Carson.  His plethora of mental issues cause him to have uncontrollable high pitch laughter when he is nervous or is an uncomfortable situation; making bad situations worse.  Depressed, living with his over-opinionated mentally ill mother, trying to make ends meet in their 1-bedroom apartment, is a constant reminder of life’s oppression.  It shapes him, conforming him to something else.  Something far more vicious and brutal.  He journeys from being a scrawny kid “getting sand kicked into his face” to becoming the Atlas of super villains, The Joker.

Director/writer Todd Phillips takes you on an unsettling journey into the mind of a sociopath.  Scenes are gloomy and uncomfortable.  The music is like piercing knives going into your back or fingernails screeching across a chalkboard.  Even the use of fluorescent light bulbs dimming and brightening as you hear the electricity running through them in the background is genius.  His mixture of brutality and comedic relief is apparent in a very graphic scene in which Fleck is confronted by two of his co-workers who are checking on his well-being since his dismissal from work.  First, viewers are horrified, grimacing at what they are witnessing.  Then in an instance, they are laughing; feeling guilty, but still laughing.  Phillips sets the mood perfectly and reminds viewers that this not your ordinary D.C. movie where we are made to feel good and cheer the hero at the formulated anticlimactic ending.  Instead, he reminds us that all endings are not happy, they are in fact, unmerciful.

Another masterful storytelling tidbit is that Phillips sets the timeline without overtly revealing it to the viewers. He wants us to sense the time or question if it is relevant.  (Eighties babies will be able to figure out the exact year).  Phillips teases the audience with the scenery of a city resembling New York, Gotham.  The automobiles, fashion and the grittiness of the climate, keep us mentally searching for clues while being mesmerized by what is taking place.  This enhances the mystery or mystique of the film making it grungy and uneasy to watch.  Scenes are dark and dirty; not too much greenery or suburbia.   He keeps the members of the audience in a state of depression and without hope, tying viewers to the life and mental state of the title character.

There was a time when Joaquin Phoenix would grace the silver screen and people would ask, “Isn’t that River’s little brother?”  River Phoenix (Stand by Me, Indiana Jones and the Last Crusade and The Mosquito Coast) was such an acting phenomenon, one would question if Joaquin would ever get out from underneath his big brother’s shadow.  Now his brother, River, is an afterthought or a “yeah I remember him” comment in comparison to the star of Walk the Line and Gladiator.  Moreover, because of this Oscar-worthy performance, now, when people think of the Joker, the question is “Heath Who?” Joaquin surpasses the late Ledger’s best-supporting actor performance in The Dark Knight.  Because the Joker is the central character of the film, there is time to explore the many facets of the homicidal maniac.  Joaquin walks the viewer through every painstaking part of Fleck’s miserable life from his clinically diagnosed mother and his unrealistic relationship with his next-door neighbor/girlfriend’s to his inability to hold the mediocre clown job that gives him the closest thing to pleasure.  He contorts his performance like that of his malnourished battered body whimsically dancing to the offbeat mockery of his existence.

When Joker’s transformation from his alter ego Arthur Fleck’s comes to fruition, it is a scene for the ages.  He finally gets on Murray Franklin’s talk show, but instead of performing his stand-up act that he has fantasized about all his adult life, he has a sit-down conversation with the talk show host debating the differences of the “have and the have nots”.  Arthur states it is big news when three affluent stock-brokers from a nice neighborhood get shot and killed; but, if there is a person like himself lying in the street suffering, the good people of Gotham step right over that person as if there is no one there.  Fleck proclaims that Gotham is a city waiting to erupt from the injustices she suffers consistently by her inconsiderate children.  The scene is paralyzing, full of intrigue and awkwardness, putting audience members on the edge of their seats, waiting to see if the elephant in the room is going to go on a tirade and trample everyone in its path.  This is truly one of the better and unforgettable movie scenes in recent history.

It is hard to keep your seat when a standing ovation is so deserving.  The acting of Joaquin Phoenix along with the directing and writing of Todd Phillips are the best cinematic combination of the year.  The R-rating allows audiences to slowly digest the monstrosities of Arthur Fleck and his rise to infamy.  It is an observation of the turmoil in his life and how the cruelties lead him to his destiny of becoming The Joker.  It is parallel to the life of Bruce Wayne’s transformation to Batman after witnessing the senseless death of his parents as a young child.  Phillips pens a tale where the birth of the Joker directly contributes to the creation of Batman somehow knowing that the injustices the Joker spoke about on the Murray Franklin show simultaneously forge a hero who must now protect the citizens of Gotham from the chaos sparked by the injustices that they helped to create.