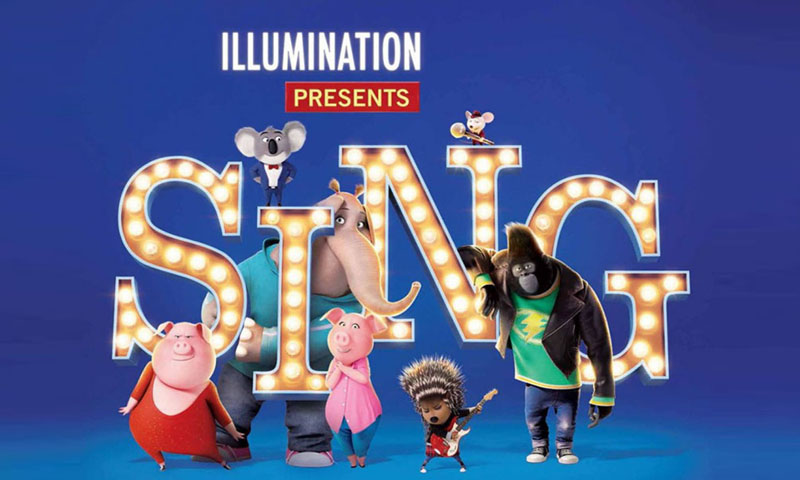 Sing is about a koala named Buster Moon who owns a theater called the Moon Theater. Ever since he bought the theater, none of his shows have been successful. In a desperate attempt to save it, he organizes a singing competition to host real talent from real life live on his stage.

I really liked this movie. I liked the songs and the performance by the actors (especially Tori Kelly and Scarlett Johansson). What I really like, though, is the many themes in the movie. Each character has his own based on their own story. For example, there’s a gorilla named Johnny whose father works as a criminal and wants his son to join his gang. This is most sons and daughters can relate to. Parents want their children to be just like they are, but when the children reveal to their parents who they really want to be, parents grow disappointed.

Ash, a porcupine, was a backup singer to her boyfriend, Lance. They both sang together during Buster Moon’s audition, but, to their surprise, Buster Moon chose Ash alone, without Lance. At one point, Ash expressed her opinion of writing her own song for the show, only to be met by Lance’s reply that she couldn’t do it. Eventually, she finds another girl in her house, his new girlfriend, Becky, and dumps him. She starts writing her own song and performs it at Buster Moon’s show. To her surprise, everyone likes her song. The thing is, don’t let anyone force you to live in their shadow and convince you that you can’t do something just because you’re the one doing it, not them.

Rosita, a mother with 25 children, loves singing so much that she does it almost all the time, despite the fact that her kids mock her, and her husband doesn’t even pay attention to what she says. As soon as she saw the flyer to Buster Moon’s competition, she works out a way to take care of her children and husband and make time for rehearsals. Buster Moon partners her up with Gunter, a German (I think) pig whose passion is dancing. He encourages her to dance with him, but she tells him she can’t. She even makes papers with colored footprints on them and spreads them on the floor to remember the steps, but Gunter messes them up on purpose. He tells her not to remember the steps, but to let the music take control of her body, which she says she also cannot do. She then discovers that she can do that after she automatically dances to music at a supermarket, and starts rehearsing again with Gunter. In the end, they make a performance that blew away everyone, even Buster Moon himself. This teaches us that you are never too old to go back and do what you love most. Rosita actually reminded me of my mom, only she was the opposite of Rosita. My mom sacrificed so much so that she could make time for both me and my dad that sometimes she forgets to take care of herself and her own needs. Rosita, on the other hand, as soon as she saw a chance, she tried to both do what she loves most and take care of her family. 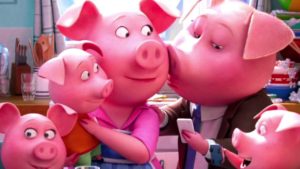 Meena is a young elephant with an INCREDIBLE voice, but she is extremely shy and is too scared to sing in front of anyone. When she hears about the competition, she goes to audition, but her fear prevents her from singing. She goes the next day to ask for another try from Buster Moon, instead she ends up as his stage hand. It is only when Buster Moon hears her singing alone one day that he realizes that she truly has talent. In the end, Meena sings in front of a live audience and impresses them all (and me). Of all the characters in this movie, Meena is the one I can relate to most. I cannot tell you how many times I have given up chances to join activities or to mingle with other people just because I am too shy to do it. The lesson learned here is that we should never be shy. If you really like to do something, go for it, don’t be scared of doing it, or of failing and being a laughter. As Buster Moon’s father used to say, “Don’t let fear stop you from doing the things you love.”

I even liked Buster Moon’s story. Ever since he was young, Buster loved everything about theatre. His father worked hard every day so that Buster could purchase the very same theatre in which he fell in love with the art. However, none of his shows brought in money, and was threatened that the bank will reclaim the theatre if he is unable to pay them the money they needed. Desperate, he holds a singing competition, but his assistant, Ms. Crawly, drops her glass eye onto the number 0 on the keyboard, accidentally writing the prize money to be $100,000 instead of $1,000 on the flyer. All goes well, with a famous opera singer coming to see a private screening of the show to sponsor the prize money, until the theatre is flooded and destroyed. What I really like is the next part: Buster Moon starts washing cars, soaking himself wet and wiping cars clean. One customer was impatient and actually drove off with Buster still on his car, throwing him onto the street. This shows how one can be in a good status economically, socially, and mentally, and in one single moment, everything comes crashing down around him. Everything can look so bleak and hopeless around him, and yet, despite all that, he can rise up again to the good life he used to have. In the end, Buster puts on the show, and everyone loves it. The opera singer mentioned earlier purchases the theatre after it was reclaimed by the bank, rebuilds, and reopens it. Things can look really bad and bleak, but with a little determination and hard work, things can be even better that they used to. Buster Moon said a quote in the movie and to this day I believe that it is the best one I have ever heard, “You know what’s the best thing about hitting rock bottom? There’s only one way left to go, and that’s: UP!” 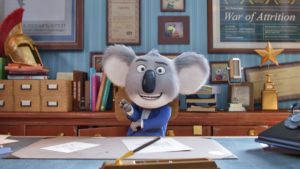 Now, Mike, is a whole other story. I’m not even sure if he was the villain in the movie or not. Basically, Mike is a tiny mouse who is a street performer, and has an ego bigger than his size. He is arrogant, self-centered, and thinks he is always better than everyone. He even bullied anyone that gave him money on the street to give him more. In fact, he was the one who ushered Meena off the stage so that he could start his audition. He wins a game of cards at a nightclub by cheating, and three bears start chasing him until the end of the movie. He still performs in the show, but, as he hears Meena sing for the first time and cheers her on, the bears kidnap him, but his girlfriend saves him. Cheating and arrogance are bad. These qualities don’t make people love you, they make people repel you.

One of the things I love about the movie is that the contestants immediately became friends during rehearsals. Johnny wished a contestant (I can’t really remember who) luck while he was going backstage (Mike insulted that same contestant). Meena wished Ash luck during her first rehearsal while Mike called her a “moody teenager”. Rosita and Gunter help calm Ash down after her breakdown during rehearsal over dumping her boyfriend. They were such a great family that I couldn’t help but love.

One of the things that I don’t love, however, are some of the jokes. One scene included a bull that farted in Buster Moon’s face out of nervousness, and he’s farted over three times after that. The Japanese red pandas were seriously annoying. They couldn’t understand English, so they thought they were part of the show. They were always speaking Japanese, singing in Japanese, dancing and giggling. At one point, Buster shook his finger at them, indicating “no”, but they mistook it for a dance move. They only time I really liked them, however, was when they cheered Ash’s name after her song. I was actually quite relieved Buster said a bad word to them in Japanese, just so they can quit the show (I felt sorry for Buster, though, who was slapped by one of them).

I really recommend this movie to everyone, big or small. It has so many life lessons we could all learn from and it’s really entertaining.