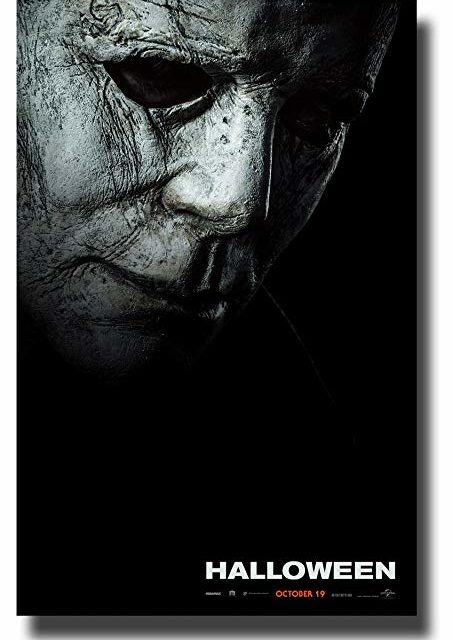 Rewriting history is a phrase often used, but seldom done.  But if you could go back in time and erase the history of something very prolific and universal to change the outcome, would you?  Would the outcome really be that much better, or would it cut down on the redundancy of the things that came after making the event that once was so rich and abundant, now comical and predictable?   Halloween 2018 has accomplished the before mention making the final product worthy of its legendary predecessor directed by John Carpenter over 40 years ago.

Forget the sequels after the 1978 classic – spoiler alert.  Forget Michael Myers coming to the hospital to pick-up where he left off trying to kill his sister Laurie Strode.  Yes, and forget that he actually killed her in Halloween H2O.  And of course, forget Halloween III:  Season of the Witch (most fans do not consider this part of the series) and the many sequels thereafter.  All of them vanished; never happened.  So, if you can wrap your mind around that then Halloween 2018 puts a toe tag on the franchise, changing the original film just enough making this film quite enjoyable; capturing the intensity and suspense of the original.

Jamie Lee Curtis reprises her role, one last time (deja vu), as Laurie Strode.  She comes to her final confrontation with Michael Myers (James Jude Courtney/Nick Castle) who she has been waiting and preparing for over 40 years.  This has caused tension between her and her daughter (Judi Greer) who was taken from her at the age of 12 and the community that regards Strode as the town crazy.  Michael has been institutionalized since that horrible Halloween night.  Waiting patiently and not speaking a word, he plans his escape, killing everyone who gets in his path, determined to confront the one person who escaped his carnage that night.

CAUTION:  THIS REVIEW IS GOING TO CONTAIN SPOILERS; SO PLEASE BEWARE!

The film discreetly gives homage  to John Carpenter’s original horror classic.  One of the obvious tributes is a killing scene of a victim wrapped in a sheet with two eye holes cut out.  In the original, this was Lynda’s death scene.  She was strangled with a telephone cord after Michael dresses in a sheet and sunglasses.  Another is Bob’s death as he looks in the refrigerator and turns around only to find Myers confronting him as he chokes him with one hand and pins his body with a butcher knife with the other afterward staring at his masterpiece with admiration.  In addition, its homage to the most unsettling part of the original film.  The moment when the audience discovers that Michael Myers is not dead after being shot by Dr. Loomis and falling to his apparent death.  When the camera cuts with a view back over the balcony only to discover the imprint of his body, but Michael is nowhere to be found.  But this time it is Laurie, not Michael.  There are more but you would have to watch the film more than once to discover the precious wistful tidbits.  This is what makes it an instant classic.

There are two characters that stand out in the movie, but for two very different reasons.  They are Dr. Sartain portrayed by Haluk Bilinger and Jibrall Nantabmbu as Julian. Doctor Loomis protégé, Dr. Sartain (Bilginer) is a bit of a stretch as a frantic doctor trying to find his true being through his patient.   He looks disheveled and anxiety-ridden in hopes to be a Loomis copycat.  But he does not pull it off.  The film depicts him as a doctor possessed with Michael Myers; consumed by admiration.  His obsession with Myers comes to a boiling point when he takes off his mask (thinking that Myers is dead) and wears it to become what he considers as true evil in its purest form, Michael Myers.  For the doctor to be portrayed as crazy is one thing but to become a murderer in order to feel what it is like is another.  It takes away from the legitimacy of the character; making it ridiculous.

For a short time that Jibrall Nantambu is in the film, he takes over the scene.  He provides comic relieve for the film as a kid being chaperoned for the night by one of the town’s teenagers.  But it seems that he is the smartest person with common sense in the house.  With his direct to the point cursing personality, to the heartwarming moments as a scared kid who knows how to run away from trouble instead of going straight towards it, he serves as a pleasant surprise.

It is very difficult to make horror movies scary, anymore.  Horror films are viewed as intense but certainly not scary because everything in the genre has been done and redone.  Occasionally there are things that go bump in the night that make viewers jump during the movie.  But what happened to the days of having audiences so scared that they watched the movie with only one eye because the other eye was covered?  The watching but not wanting to watch at the same time — horror hysteria.  Halloween 2018 lacks the frightening, gut-wrenching feeling of its predecessor, but it recaptures the intensity and the nostalgia of the 1978 Carpenter classic.