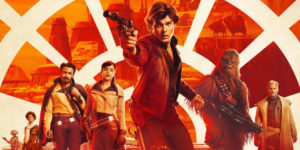 We start out on Han’s planet, Corellia, a shipbuilding society that is run by a thug mother-figure, Lady Proxima, who makes the inhabitants participate in the criminal underworld in exchange for food and shelter. After some risky events, Han (Alden Ehrenreich) manages to escape this life, but leaves behind his girlfriend, Qi’ra. After joining the Republic to try to gain knowledge as a pilot, we find out many aspects of Han’s life that previously had been a mystery, such as how he got his name, how he met Chewy and Lando, and of course, how he managed to make the Kessel Run in 12 ParSecs. We also get to witness some of his smuggling days when he joins up with some thieves (Woody Harrelson) and (Thandie Newton) to steal coaxium (expensive and very explosive fuel) after being hired by Dryden Vos, who is *gasp* Qi’ra’s new boss.

This film was entertaining as a stand alone film, but if you are a Star Wars buff, I feel like there was a lot of disappointment. For me, the mystery that oozes from Harrison Ford’s Han Solo is just so sexy and makes his character that much cooler. I didn’t want or feel the need to have a complete account of his back story. As for the cinematography, it was lacking in wide shots, and I feel like immense establishing shots are required in a Star Wars film. When I compare this with Rogue One, it was just tonally different, and maybe that’s because it was character focused instead of plot driven. I did however, enjoy all of the action scenes.

As for the acting, I can imagine that Donald Glover and Alden Ehrenreich both felt like they had to give the performance of their lives. These are such idolized characters, and I think that they both did them justice. Donald Glover had the mannerisms of Lando Calrissian down, and I loved the costume design that they created for him. Ehrenreich (Solo) got Ford’s awkward smile down to a T, as well as his strong shoulder wide stance that shows Han’s dominance in a shot. There is one particular shot, where Han enters the room where Lando is playing cards, and they frame the shot so that Lando is positioned in between Han’s legs. It is a very intimidating and foreshadowing shot.
Speaking of characters, what was up with the very liberal L3 droid of Lando’s? I thought it was completely off-putting and over the top, and I would consider myself more towards the left politically, but every reference doesn’t have to be about equal rights in order for a point to be made. Any time that I am reminded of our society, it completely takes me out of “A galaxy far, far away.”

So let me backtrack here, for the first 20 minutes of this film, I was trying to establish the timeline in which this film takes place in the Star Wars universe. My initial thought was that it had to take place some time after the first (chronological) trilogy. So this was my thought for the entire movie, up until the last 10 minutes or so when we are reacquainted with an old friend, Darth Maul, who we all saw get cut in half in Episode I. What? I heard a few other gasps in the audience. I turned to my boyfriend sitting next to me, and gave him the most puzzled look, but he smirked back at me with a smile and nodded his head! He knew something I didn’t, Darth Maul in fact had not been erased from the Star Wars canon just yet. In the animated series, “The Clone Wars,” and “Rebels,” the Darth Maul character is resurrected, basically put back together with robotic legs. Now, having seeing these animated episodes, I can assure you the writers of Solo did not make a mistake in adding Darth Maul, and I have to thank them for adding this plot twist because it made me watch this animated series, which is awesome! There are some other references to the animated series that avid Star Wars fans are sure to pick up on as well, so I appreciate that for the real fans!

At the end of the film, I was like, wait, Ron Howard directed this? I went into this movie not realizing that such a legend was directing this Star Wars add-on film, why was this not in the marketing campaign? That being said, I’m not sure why it wasn’t edited a little differently. Some famous Star Wars wipe fades would have been nice. Because of this, the tone of the film just wasn’t there for me. When I watch any Star Wars movie, I usually get chills from the soundtrack alone, but this film only seemed to throw in the John William’s score a time a two, which was a little disappointing.
Overall, I liked this movie as maybe a stand alone, space cowboy flick, but it felt unnecessary as a filler to the Star Wars Universe. I didn’t like being told Han’s secrets, I liked having my own story to go with the mysterious Solo character. 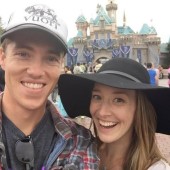