From Heroes to a King. 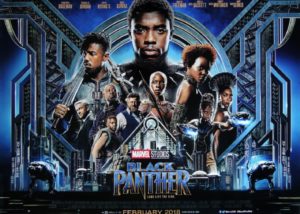 Marvel’s 18th film in their Cinematic Universe bring a fresh face in Black Panther. T’Challa  is a warrior from the country of Wakanda which is mentioned in a few other Marvel’s film such as Captain America: The First Avenger & Avengers: Age of Ultron. After scoring big with the 2013 indie film, Fruitvale Station, and then the Rocky spinoff, 2015’s Creed, director Ryan Coogler helms his first big budget film and continuing Marvel’s cinematic universe. The film stars Chadwick Boseman, Michael B. Jordan, Lupita Nyong’o, Danai Gurira, Daniel Kaluuya, Andy Serkis, Forest Whitaker & Angela Basset.

After making his first on screen appearance in 2016’s Captain America: Civil War, T’Challa (Boseman) assumes the role of the Black Panther, protector of Wakanda. Wakanda is fictional country in Africa that is shielded from the rest of the world to protect themselves as well as advances in weapons & science. In this film, he returns home to continue as protector  and also to be sworn in as King. All is good in the beginning until the criminal, Ulysses Klaue (Serkis), seeks to steal riches & the Wakandan advanced weaponry. With Klaue, is a mysterious mercenary & former Black Ops soldier, Erik Stevens (Jordan) who has earned the name Killmonger, from the U.S. government and has a personal vendetta with T’Challa and the people of Wakanda.

Much like Guardians of the Galaxy, Ant-Man & Doctor Strange, Black Panther showed the world that Marvel isn’t afraid to take risks with lesser known characters and go to outside the box with their storylines. Coogler did great job telling the story of the man behind the suit and much like Creed , the performances are what carry the movie. Boseman is great as both King & Hero and really shows the struggles of the 2 roles. Coogler also does great with the action sequences and the look and feel of Wakanda as a whole, from the clothing, automobiles, medical equipment and weapons.

Despite all the great things the movie has to offer, it isn’t perfect. Of the last 17 Marvel films, only 4 of them had a great villain performance with the others were just one off characters. While Jordan’s performance was good, its his overall character that felt cliché and very similar to other superhero villains like Bane from The Dark Knight Rises, Whiplash from Iron Man 2, The Abomination from The Incredible Hulk and Yellowjacket from Ant-Man. All solid villains and performances but not the long lasting impressions from other great performances for comic villains. Another issue with this film is the over reliance on CGI which isn’t anything new for Marvel. I’m not saying its a bad thing but when its noticeable it can be a bit distracting.

Overall, this was a fun action film with great performances and is great entry in the Marvel Cinematic Universe. While it does the same problems that other Marvel films, it does take away anything from the film and does both entertain the audience and gives high hopes for the Cinematic Universe going forward.

X-men Origins Wolverine & the death of my inner child