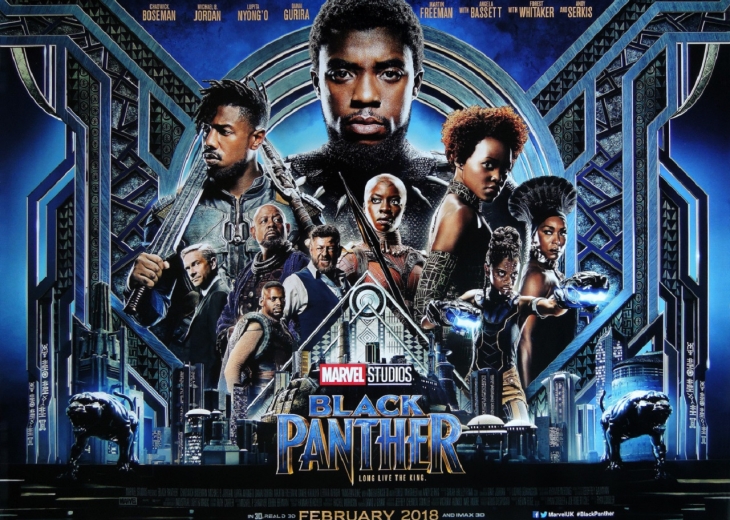 There are times when movies come to theaters that strike a chord and taps into the consciousness of audiences that makes them feel that it is their obligation to spend or donate their hard-earned money to view this cultural phenomenon. They inspire moviegoers to dress up like their favorite characters donning capes and wands or uniquely exquisite hairstyles. A film that makes audience members dress in dashikis or authentic African garb to be a part of the movie-going experience; not as a viewer but a participant. These are not your ordinary everyday films. They are much, much more. One such film is Black Panther.

No, it is not about the Black Panther movement of 1960, the 70s and early 80s, but it is a powerful statement of the movement or transcendent of superhero movies from then until now. It breaks the stereotypes of superhero films and serves as a big breakthrough for Marvel films, which are light years ahead of storytelling from any of its competitors. Black Panther is culturally enriched full of African music with a loaded soulful soundtrack from Kenrick Lamar. Depicting African American women as strong significant characters, not as damsels in distress waiting to be saved by their male counterpart, Black Panther sets itself apart as the prototype for furter Marvel films.

After the tragic death of his father, T’Challa (Chadwick Boseman) returns home to the reclusive technologically advanced African nation of Wakanda to serve as his country’s new leader. When a conspiracy to destroy Wakanda arises, Black Panther must find a way to prevent the destruction of his country and protect its treasured secret. Whiles discovering the origins of T’Challa/Black Panther, the complexity of his father, T’Chaka, are revealed. His father’s sacrifices he made to keep his nation’s discovery secret maybe what destroys Wakanda in the end. Some secrets are not meant to be kept, they are meant to be shared to provide blessings to those in need.

Like that of D.C.’s Wonder Woman, the cast is full of strong female characters. From Danai Gurira’s (The Walking Dead) character as General Okoye the loyal but no-nonsense warrior to the compassionate, deeply committed love interest of T’Challa, Nakia (Lupita Nyong’o of 12 Years a Slave).

With an abundance of African themes, colors, breathtaking scenery and music, Black Panther sets itself apart from other Marvel movies. It keeps you entrenched in this symbiotic cultural experience. It emotionally connects with the viewers, resonating the endless possibilities of the Marvel Universe (i.e. casting a female lead for a predominate male character in 2019 Captain Marvel).

Chadwick Boseman exemplifies King T’Challa of the fictional nation of Wakanda. He is the African-American version of Tony Stark without the sarcasm. Not surprisingly, Boseman acting and onscreen presence bring out the humanity of his character. His accent along with his polished look makes it seem that he was born to play this role.

Michael B. Jordan portrayal of Erik Killmonger, T’Challa’s nemesis, who fights for the crown to become the leader of Wakanda is exceptional. But this is not surprising, judging from past work in films such as Creed and Fruitvale Station.

From his tribal marked chest to the gold caps on his molars, he embraces both the Wakandan culture along with the inner streets of Oakland, California. One moment he is polite and well spoken and the next his Bay area upbringing rears its ugly head as simply states, “Burn all this shit”. Jordan is not a villain full of one-liners intended to make the audience laugh and see him as a witty, but corny, antihero. Instead, he depicts Killmonger as a lost soul determined to understand his heritage and the why’s behind his upbringing. Full of betrayal and hate, Killomger is no-nonsense but intelligent and convincing in his belief.

Marvel traditionalists make raise an eyebrow towards this film. They may say that it is too much of this or too much that, but not enough of this. The argument or the flashing yellow light signifies to proceed with caution because it is not intended for the conventional Marvel Universe fan. But, I beg to differ. Writers Ryan Coogler and Joe Robert Cole’s vision of Stan Lee’s and Jack Kirby’s comic book character, Black Panther, has taken Marvel films to the next level. Superhero movies, formulated with outstanding CGI and over the top action, but heartfelt and message based that can tap into a generation making it not only fun but an obligation to view a film with meaning and inspiration; not just “gotta-see” but must see.

Evan Almighty: The Good and the Bad