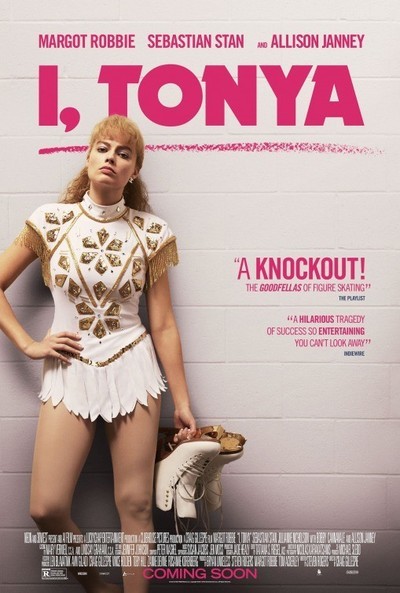 Sometimes the truth is stranger than fiction. For example, did you know that more people are bitten by New Yorkers than sharks? Crazy, right? Almost as crazy as a skater being attacked and hit in her leg with a crowbar to keep her from competing against her rival in Detroit, Michigan in 1994. Have you ever heard of the saying, “you have to laugh to keep yourself from crying”? I, Tonya is a prime example of both stranger than fiction and laughing to keep from crying. This film brings to question if this really happened or is it a tale of slight truth with a lot of myth and folklore legend. One thing is certain. Steve Rogers could not have written this seemingly Shakespearian tale any better.

I, Tonya is a mocumentary (not really, it just seems that way) about the life of Tonya Harding (Margot Robbie) and her rise among the ranks in U.S. Figure Skating during the 1990s. It brings to life Tonya’s turbulent relationships with her uncaring mother (Allison Janney) and her disparaging ex-husband (Sebastian Stan) and how it snowballed and led to what some consider as the most dramatic moment in figure skating history. The film paints a picture of two victims; Nancy Kerrigan suffering a leg injury that put her out of the competition and Tonya Harding suffering from a lifetime of physical and mental abuse from both her mother and her ex-husband.

The film is full of dynamic performances, but Allison Janney’s portrayal as the callous, mentally abusing, cigarette smoking mad at the world, pushy, abrasive LaVona Golden is incredible. Talking to the audience, first person, with a parrot on her shoulder is priceless. It sheds some light into Golden’s mind of obscurity and a sense of her emotionless persona. Janney and Robbie onscreen mother and daughter relationship is like an elegant dance. The choreography was perfect. At times, you become lost in the scenes and truly believe that they are mother and daughter surviving or languishing in a relationship of dysfunctionality like that of Joan and Christina Crawford in Mommy Dearest. From the mental anguish and neglect to the institution of “tough love” in order for her daughter to compete at a high level and accomplish things in life, Allison Janney’s performance is Oscar-worthy.

This is a sad story that everyone’s fate did not fair well. It consists of relationships fueled by passion, healthy or unhealthy, it did not matter. Writer Steven Rogers’ (Love the Coopers, Hope Floats and Step-Mom) perspective of Harding’s life is what makes this film truly unique and exceptional. Are you supposed to laugh or cry? And if you do laugh, should you feel guilty, because you are thinking to yourself that you are glad this is not your life? Can you empathize with Tonya Harding because of the life she led? Or is it so convoluted that you realize somewhere between this fact or fiction, lies the truth? You be the judge.

I Love You Philip Morris