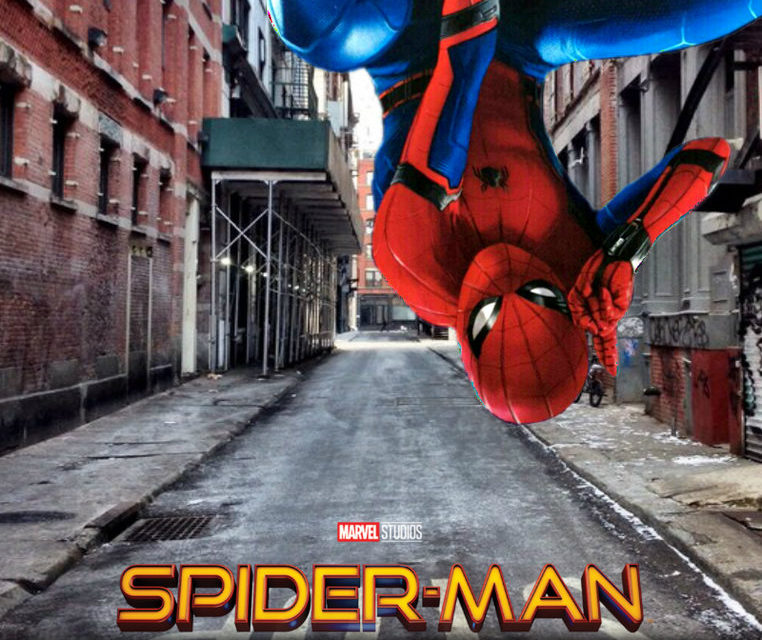 How do you make something appear fresh and authentic, if it has been done so many times before?  Maybe, you can buff or wax it to make it look shiny and new as it sparkles in the sunlight.  Or, you can dress it up in new attire or repackage it under a different name.  In today’s climate, nothing seems new and exciting, especially when it comes to movies.  Filmmakers love to remake films repeatedly, from King Kong to Carrie to Fantastic Four to Batman.  They try to be new and clever, but it often comes across as “seen that, done that”.  There is an old saying that you can put lipstick on a pig, but it is still a pig.  But after watching Spider-Man:  Homecoming, the most creative and intelligent Marvel movie since Dead Pool, director Jon Watts must have some magical makeup bag, because this pig is absolutely gorgeous.

Opening with an over the top orchestrated version of the 1960’s Spider-Man cartoon theme song,

Spider-Man:  Homecoming starts off with Peter Parker returning home after the battle on the airport runway in Captain America: Civil War.

Like a small child visiting Disney World for the first time, the youthful Spider-Man captured all the frills and thrills of his once in a lifetime adventure on video and the use of a GoPro-cam.  He is in admiration, batting along the side of Iron Man, The Black Panther and Vision, taking it in like an amusement park ride, capturing behind the scenes footage of the epic battle.  But, when the action is over, Peter Park realizes he is just another quirky teenage kid trying to get through the ever-challenging life of high school.  Unlike other high school teenagers, he as another added quirk. He can stop a speeding bus with his bare hands and fly through the air with “cat-like” (Spidey) reflexes.  He must stop a criminal determine to destroy anything in his path, The Vulture.  Parker soon discovers that he cannot enjoy the normal life as a high school teenager, because there is so much more that is demanded of him.

The film has many compelling aspects.  From Tony Stark mentoring the adolescent, to Parker and his best friend trying to break out the “geek” shell that their peers has put them in.  Aunt May is young and sexy and the movie uses Batman as a villain.

One interesting aspect of Spider-Man:  Homecoming is the mentoring of the 15-year-old Peter Parker by billionaire Tony Stark.  His father-like relationship with Parker is both amusing and heartfelt.  At times, it is like watching a dysfunctional “Father Knows Best” episode.  Stark makes a special Spidey suit for him that progresses as Parker becomes more familiar with his abilities and how to masterfully use them.  He wants him to avoid the mistakes and pitfalls that a young adolescent super hero is destined to make.  Although Parker’s behavior is well intended, his actions can lead to disastrous outcomes like death and destruction.  But Parker, longing for the spotlight, quickly learns with great powers, come great responsibility.

Tom Holland is brilliant in his portrayal as a high school “nerd”, grasping at the ever-elusive popularity stick.  Reminiscent of Gary and Wyatt in Weird Science, who built a gorgeous woman in high school to gain popularity, Parker, and his best friend Ned, (Jacob Batalon), devise a plan to introduce Spider-Man as their best friend to win the heart of pretty girl and become high school royalty.

But often in life, plans do not always turn out how they are expected to.

Michael Keaton, arguably the first super hero of the new era as Tim Burton’s Batman in 1989, as the villain, The Vulture, is masterful.  He plays dejected, fed up with corporations and superheroes (especially The Avengers) Adrian Toomes.  Toomes is a very committed family man who does anything to protect and provide for his family, including stealing, murder and causing massive destruction. Additionally, he may have a secret that may affect Spider-Man’s ability to bring him to justice.

As a potluck of intellectual originality, Spider-Man:  Homecoming gives you a lot to “chew on”.  From Captain America’s hilarious cameos, to the introduction of an old character as new that gives you that “ah ha” moment. The film captures the essence of naive teenage Peter Parker becoming Spider-Man, enticing you to fall in love with the character all over again.  It finishes with a bang and has you craving for more, anxiously awaiting the next installment.  This is not a spoiler alert, just a friendly neighbor reminder.  Stay until the very last credit ends.  Truly, the most original after credit clip that you will ever see.  Definitely, bring the family and friends for this one.