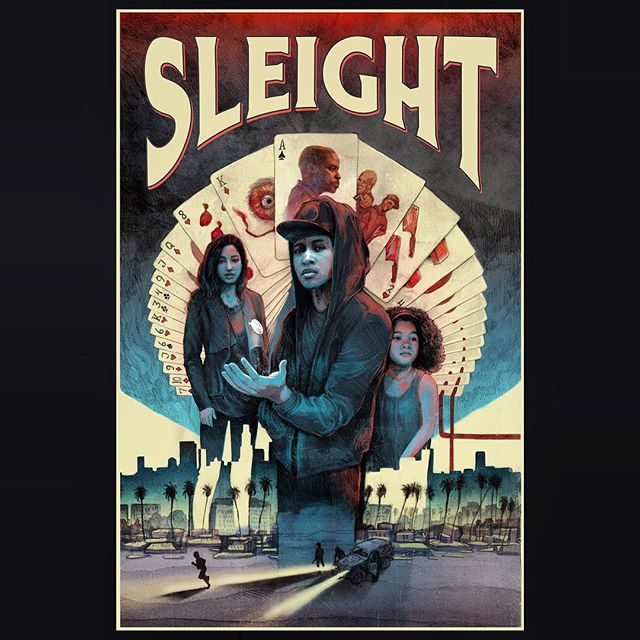 “A Hero Is Not Always Who You Think He Is”

Do you remember that kid in high school that was different than the others?  He was not odd, per say, he just had a style of his own.  He was unique not only in the way he dressed, but in the way he spoke and the way he carried himself.   No, he was not the most popular kid in school, but people knew of him.  Not as the class “nerd”, “clown”, or “the emotionally withdrawn” he was just himself.  He did not have any ties to any groups or subcultures within the hierarchy of the student population.  There were no pretensions. He was honest, straight forward and truthful.  Sometimes, his statement took you back a little. But you appreciated and respected him because there was no facade.  He was “that kid”.  And when you watch Sleight, there is no Hollywood cinematic “bells and whistles” and you might not like everything that is presented to you.  But you will applaud it for its originality and its commitment of trying not to be like other like-minded movies.

Sleight is about Bo (Jacob Latimore), a young street magician, who must turn down a college scholarship after the death of his mother, to care for his younger sister.  Times are hard and he turns to selling drugs to keep a roof over their heads. Things get worse and he forced to find a way to get out of a disastrous situation using his magic and new found powers to save the ones he loves.

The plot is simplistic, but well thought out.  The story line is far removed from the typical superhero movie.  Really, it can be better described as “days in the life of”.  On some level this fails, because at times, it seems too well thought out due to the overdrawn plot development that is not necessarily needed to make the film work.  This often happens when new character (superhero) is introduced and there is a lengthy history lesion of the hero’s background.  But as a viewer, you just want to get to what makes him special; the powers that he possesses; and how is he going to use them.  But maybe, we are partly the blame.  We walk into the theatre with over anticipation, because we just want to see them “do what he do”.

There are two outstanding performances in the film; Jacob Latimore as Bo and Dule Hill as Angelo.  This is Jacob Latimore’s first lead role in a film and it is evident.  He has acted in other movies like, Black Nativity, Ride Along, The Maze Runner, and Collateral Beauty, but this is the first time that the spotlight truly shined on him.  Although the stage is not too big for Latimore, there are times that he has trouble “hitting his mark”.  He is not a seasoned as others and when the script calls on him to have depth or intensity, he sometimes stumbles.  But his innocence also serves toward his character’s attributes as naive and unsure of himself.  He later gains strength through his powers and the decisions he must make for the survival of his family.  Dule Hill (Psych, West Wing, and Ballers) has been in Hollywood for a while; although most of his acting has been on television.  We are accustomed to seeing him portraying positive characters; but, to see him as a ruthless drug dealer who honors respect above all, is a warranted and refreshing departure from his typical roles.  He comes off as charming, articulate, and suave in otherwise horrible circumstances.  Although the characters show commonality to like characters in other films, the two performances are refreshing and engaging.

After seeing the previews and walking into the theater, I did question whether I was “hoodwinked” into watching a live action version of the early 2000’s cartoon, Static Shock about a teenage boy who was exposed to mutagen gas during a gang fight that gave him electromagnetic powers.  But the film is far from that.  It is gritty and heart felt attempt of making a movie with a super heroic theme; ordinary.  Making you feel as if this could really happen in your neighborhood to either you or a friend. Although it is not as original as Deadpool, Logan or even Chronicle (for that fact), J.D. Dillard should be applauded for his effort to break away from the norm.