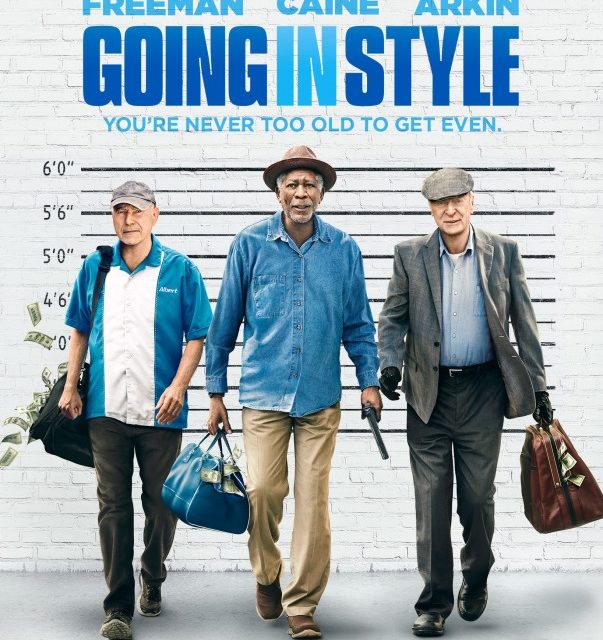 “Before There Was New School, There Was Always Old School”

Sitting down with my family during a Sunday dinner, a conversation arises as I pass the biscuits as requested by my children.  The topic of discussion is comedy; who’s funny versus who is not.  Of course, like every other Sunday when the Millennials tells the older generation their version of the facts (i.e. opinions), a verbal spare fight ensues.  They swear they know what’s funny, and as I am eating, my head slowly rises from my plate to hear their “funny list”.  The list goes from Keenan and Peele to King Bach.  I remind them that the jokes or comedy situations they stream on Netflix or watch on YouTube, for the most part, has been done before.  They act as if that YouTube is the birth of originality.  So, I dig into my DVD/blue ray collection and pull out a history of comedic historians/legends like Richard Pryor, Eddie Murphy, Martin Lawrence, and more.  Going in Style is a reminder that the older you are does not necessarily mean the less funny you are.  In fact, like wine, you get better with age.

Going in Style, a remake of the 1979 film that starred George Burns, Art Carney and Lee Strasberg, is about three lifelong friends (Michael Caine, Morgan Freeman, and Alan Arkin) barely making it, struggling though life because the company where they worked for over 30 years dissolved their pensions to pay off its debts.  They decide to rob a bank, but they soon discover that “they are not as young as they used to be”.

Albert (Alan Arkin) is resistant to go along with the group’s plan to rob a bank, at first, but then realizes that his options are limited.  Joe (Michael Caine) is the mastermind behind the bank heist whose daughter and granddaughter live with him because they have nowhere else to go.  Willie (Morgan Freeman), the glue that keeps them together, figures he has nothing to lose when he discovers that time, especially his, is not guaranteed to anyone.  The bond between the actors reflect a true friendship and is the primary reason for all the laughs and hysterical moments in the movie.  This is evident when they test out their robbery plan at a local grocery store.  SNL’s Keenan Thompson, for the Millennials out there, is very entertaining and condescending as the manager of the grocery store.

Now, if you are reading this and wondering who are Alan Arkin, Michael Caine, and Morgan Freeman, then this movie may not be for you.  But if you have an appreciation for true comedic value, then you may want to go to your local theater, grab a gigantic buttery bag of popcorn with a large diet coke (of course) and enjoy.  Maybe then you will come to the realization that before there was new school, there was always old school.

Summary Going in Style, a remake of the 1979 film that starred George Burns, Art Carney and Lee Strasberg, is about three lifelong friends (Michael Caine, Morgan Freeman, and Alan Arkin) barely making it, struggling though life because the company where they worked for over 30 years dissolved their pensions to pay off its debts. They decide to rob a bank, but they soon discover that “they are not as young as they use to be”.

“Before There Was New School, There Was Always Old School”