Ghost in the Shell 2017 Review 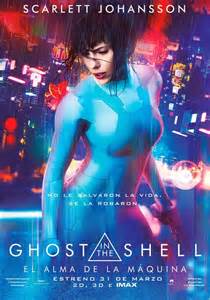 Ghost in the Shell

“Looks Can Be Deceiving”

I have always been told to not judge a book by its cover, especially when it comes to dates or movies. For example, have you ever had the chance to experience the wonderful adventures of a blind dating?   When you see your date for the first time, the date is absolutely gorgeous.  The visual perfection of the mate of your dreams.  As your date walks through that prominent, “hard to get into”, lavish midtown restaurant that has a minimum one hour wait, it seems as if you hear music in the background as the eyes of everyone turns to see who just walked in.  You stand up to give the warm embrace of a hug and kiss on the cheek, but within 15 minutes after your date sits down, you realize that you have nothing in common.  Then you stumble upon the realization, that you may have a friend that would be ideal for this person.  This is how I would describe my recent viewing of Ghost in the Shell.  Because I have a familiarity with the storyline and loved the 1995 animated movie/cult phenomenon by Mamrou Oshii, I would be that ideal friend that I spoke about previously.  But if you have not seen the animated movie, but are a lover of science fiction movies, this movie will be amazing, visually (IMAX 3-D is a must watch), but I am not sure if you are going to care about its story line and the characters involved.

Major (Scarlett Johansson) is the first cyber-enhanced soldier devoted to stopping the world’s most dangerous terrorists.  She soon finds out that her life has been a lie.  Her life was not saved, but stolen and she was an experiment to create a “super soldier”.  Now she must discover her true past and unlock the secrets that may destroy the world as she knows it.

The film is a visual masterpiece.  It captures the essence of a futuristic cyber robotic world filled with holograms, tall skyscraper buildings, and bright colors with floating street lights.  It is a cross between Aeon Flux and Blade Runner.  Now, if you do not know or have not seen one or both previously mentioned films, please save your time and sit this one out.  The “Matrix-like” action scenes are full of martial arts moves, furious gun battles and explosions.  But that’s it.  Is that enough? Maybe?

The story line drags due to lack of interest in both the plot and characters.  There is no bond between characters other than Johansson (Major) and Juliette Binoche who plays Dr. Quest, her maker.  There is even a point in the film when Johansson starts to put the pieces of the puzzle of her past together, finding someone who was an intricate part of her former life and can bring light to the darkness of her past.  But I found myself uninterested and questioned if I really cared.  Truthfully, I just wanted to see more action and to continue to be awed by the futuristic world that was beautifully painted by the filmmaker.

To my surprise, essentially most of my disappointment was the acting of Scarlett Johansson.  Before making the film, there was controversy over the director Rupert Sanders casting of Johansson rather than a Japanese actress to play the main character.  The 1995 Japanese animated movie, from which this film was based upon, derives from a popular Japanese Manga comic series.  But there probably would not have been a controversy with the utilization of screen test.  Although I am a big fan of Johansson in action movies like Iron Man 2, Captain America:  Civil War and The Avengers, her portrayal of a human with no memory (ghost) in the body of a robot (shell) was disappointing.  Her machine-like robotic movements and facial expressions are overdone and very noticeable.  She should have taken ques from Lance Henriken’s portrayal of Bishop in Aliens.

It sad to say, but just like a beautiful date that goes bad and you find that you have no interest in that person, whatsoever; “everything is good” until she or he opens his or her mouth.  If you are a true sci-fi lover or a fan of the Manga comic series, then this is for you.  Otherwise, disappointment is assured.