The DC Universe has only begun its unveiling. Do you think what lies ahead is promising if the 2016 releases are of any indication of what is in store for us?

First it was “The Bat” taking on the “Son of Krypton” in a disputably excessive run time (Although the DC Universe has a lot of groundwork to set up for the 2017 line up).

Deadshot (Will Smith) wants to be the only villain of Gotham City. Trapped between the greed of power to reign as the Alpha in Gotham, and the tears of his daughter, he is apprehended by Batman and is incarcerated. Amanda Waller (Viola Davis) & Rick Flag (Joel Kinnaman) employed by a secret government agency are attempting to recruit Deadshot, Harley Quinn (Margot Robbie), Captain Boomerang (Jai Courtney), El Diablo (Jay Hernandez), Killer Croc (Adewale Akinnuoye-Agbaje) and Slipknot (Adam Beach) to run secret black-ops missions as deniable assets for the agency. This team of supervillains are assembled sooner than foreseen when yet another asset escapes and goes rouge creating havoc across the city. The Irony of all this – the asset that goes rouge, is none other than June Moone (Cara Delevingne) the lover of team leader Rick Flag. In terms of a plot, there is absolutely too much going on already and The Joker (Jared Leto) is not even in the picture yet.

Directed & Written by David Ayer SUICIDE SQUAD is a half-baked visual marvel. It has everything that a superhero/supervillain movie should have in the department of its original soundtrack, the CGI, makeup and costuming. What baffles me is the fact of what Warner Bros was thinking when the screenplay was initially approved for production? At least with the Marvel Franchises the backstories were clearly laid for each character prior to the Assembly, The Bat Vs SM too can be excused since Nolan and Snyder told the story before. Unless you grew up reading every single comic book, you will be lost in this debacle of a screenplay.

The writing is in shambles but David Ayer and his cast certainly didn’t take a knife to a gun fight. They gear up, cover up most of the loopholes and punch their way through. Even absolutely short-lived, the Jared Leto performance is Gold. Don’t bat your eyes or the joker will be gone! If the character was written better, his performance would have made an AA nod in 2017, but with this screenplay its unlikely.

The elephant in the room? Will Smith? Let’s agree that he is the money man aka “The Face” for this blockbuster. Would it have been better to star someone else? No, Will Smith does it alright. A noteworthy performance on the other hand, falling behind Leto, is Margot Robbie, every second of her Harley is entertaining, enthusiastic and authentic, seems like she did a lot of research to pull this one off on such a high level. How I hope for a standalone movie of Harley and her pudding.

Fanboys will be excited. New to the genre? Best read up on your comics. You may find a ring tone for your phone too. 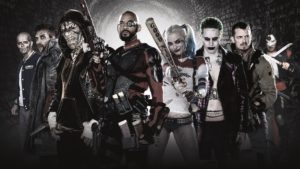