Evil and indifference we see all around us every day. And there are times when goodness is as rare as lamplight in a howling storm – Michael Wilmington 93’

The brutal realism of WWII, countless crimes against humanity and the darkest journey imaginable is breathed into life in this epic adaptation based on the true story of Oskar Schindler. Directed by renowned veteran director Steven Spielberg this story of morbid ethnic cleansing, is of timeless learning for generations to come. Starring Liam Neeson as Oskar Schindler, Ben Kinglsey as Itzhak Stern & Ralph Fiennes as Amon Goeth there isn’t a moment of distraction from the matters at hand.

Oskar Schindler an industrialist and an obvious opportunist acquires an enamelware factory in Krakow employing Jews from concentration camps in the region. Hounding prisoners to invest in his industrial venture as he reaps the financial benefits, whilst the Jewish investors are paid their returns in metal ware. As the war comes with the Germany losing, the SS begins moving its prisoners Westward to remaining camps. Oskar Schindler invests heavily on Jewish workforce by bribing the SS for his own interest. As time passes his interests were in-tuned with the well being of his workforce than himself strident towards bankruptcy.

Performances that are brutally surreal and engrossing will break you down, whilst certain artistry of hand held cinematography will place you in the midst of all chaos and tragedy. Shot in black and white with certain exceptions of the odd girl in the red coat for personification, the realism of the morbid drama of the holocaust will never leave the audiences’ mind. Up until 1993 Spielberg although is renowned for his creativity behind the camera certainly has not dealt with a screen play with such delicate baggage. A slip of the slightest would have this historical drama crawling, gaping for life at the mercy of its 195 minutes of runtime. Never is it so. With CGI at its minimal and the concentration on the subject, and the subjects’ woe within the subject is where Spielbergs’ heart is at. Enigmatic is where I am left as the end credits roll up embracing me with its moving score.

What took me so long to watch this? Is something I keep asking my self now.

Profound Beauty! If you appreciate art, this is a masterpiece. 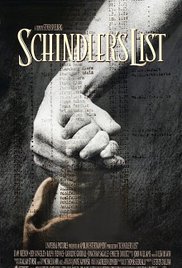