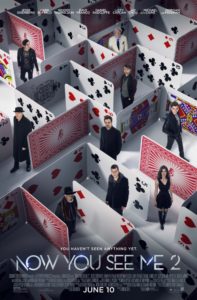 Expectation are as high as it will ever be. The Louis Leterrier redemption movie was exhilarating three years ago. The pressure is on. Can the directory of the Justin Bieber documentaries follow up to the expectations the Four Horsemen set in the first picture? As I sat there watching the late comers take their seats, I thought to myself, I will never understand folks coming in to a movie of this nature late!

Undeniably the strongest narrative voices of our time, the opening Freeman monologue locks you in, everything else is now background noise. The returning cast with the exception of Isla Fisher and the inclusion of Lizzy Caplan makes the new four horsemen. NOW YOU SEE ME 2 picks up a year following the exit of the horsemen. They resurface in a performance to clear their names by exposing the tech goliath Octa. Octa seems to be the least of the problems as the FBI closes in.

Jessie Eisenbergs’ eccentricity, Dave Francos’ prattle, Woody Harrelsons’ comic-relief, Mark Ruffalos poise and Lizzy Caplans charm are all on point. Director Jon M. Chu recognizes that the screenplay is weak (just as in “1”), the characters have no depth and the audience yearning for gimmicks. He delivers. Just like any Bond movie, MI movie, or Fast & Furious movie, its about being flashier than its predecessors. In that category I think “2” isn’t all that bad.

Danielle Radcliffe to me always will be Harry Potter (his fame came at a price). He certainly has the range as an actor but the 24-year-old to millions will always be the wizard. Radcliffes’ character of Walter Mabry is surprisingly the most versatile. Given more screen time I would chose Radcliffe over Eisenbergs as the most interesting performance. Freeman and Caine need to not even speak, their presence on its own add value.

Did we really need “2”? Well its too late for that question now since “3” is already rumored.

Arguably a parody of the first script? To an extent yes, I prefer to consider it a continuation. Exhilarating? Entertaining? Engaging? Yes. Yes. Yes. Do you need to have watched the first movie? Yes. One of the most thrilling pictures this summer? Absolutely. A must watch? Why not.