Who would have assumed that stories said to have been written by Rudyard Kipling to his daughter in 1894 will entertain the generations to come? Over a century has passed and yet another adaptation of a story as old as time is about to sweep the box office world wide.

Its been 22 years (THE JUNGLE BOOK- 1994) since the story of mowgli has been last told. With emphatic CGI and a breakout performance by Neel Sethi, THE JUNGLE BOOK directed by Jon Favreau tops the list thus far for 2016 for imagery and tips the scales in favor for cinematography with veteran Bill Pope handling the lens.

Mowgli (Neel Sethi) – A man cub, found within the jungles of India by Bhageera (Ben Kingsley) a staid black panther, is handed over to the wolf pack led by Akela (Giancarlo Esposito) and is Raised by Raksha (Lupita Nyong’o) as her own cub. Running across the jungle, swinging from branch to branch, foraging for fruit, rolling in the mud and up to his mischievous tricks is all that mowgli knows. Until his existence along with that of his wolf pack is threatened by the merciless Shere Khan (Idris Elba). Shere Khan who has a scar across his face caused by the red flower (fire) loathes humans and wants Mowgli dead.

Leaving the pack behind Mowgli and Bhageera takes to the most wondrous visual Jungle that you will possibly witness for a long time in the world of CGI. Second thus far only to Cameroons AVATAR I had my jaws dropped as the magic unfold. Jon Favreau tantalizes the mind. If there is one thing about this movie that I could not find a flaw, is in its art of extraction. Every ounce of what THE JUNGLE BOOK meant to me as a child when I read the book literally comes to life. What works best in the Favreau adaptation is possibly the fact that Mowgli is the only human interaction the audience has with during the entirety of the picture. Extracting the true essence of the story in its grandeur.

THE JUNGLE BOOK makes it to the finish line but comes in second. A tad more effort to the screenplay and this will be a near perfect production. The resounding visuals are fast dragged down and the heart warming performance by Neel Sethi is nippily obscured in the struggle to stay afloat in terms of ingenuity. All hope for redemption failed when Kaa (Scarlett Johansson) the python and King Louie the orangutan (Christopher Walken) are not as well used as Baloo (Bill Murray) the bear. There possibly would have been no complaints if they were given more screen time with an extended runtime for a classic remake of this caliber.

A visual marvel, a passionate effort.

I have my money on Andy Serkis and his adaptation of THE JUNGLE BOOK (2018). How about you? 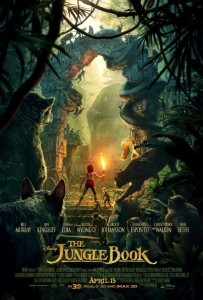