Out of this world – It’s hard to define what a true sci-fi flick looks like given what we have seen over the years. Tune into the SyFy channel on any given Friday night and you will find things that you never thought would make it on TV, and yet there is an audience for that. Ever wonder why that is? I know I have, but given my lack of knowledge on the genre, I steer clear of understanding it. Instead I take it for exactly what it is and hopefully that’s enough in the end. It was for “The Martian,” a film that you wind up appreciating more and more the longer you watch.

The story here…follows the survival of one Mark Watney (Matt Damon) after the mission he was part of on Mars went south. Rarely would weather cause a mission to change, but that’s exactly what happened on Mars when a wind storm came crashing down on the Ares III crew. Forced to leave the planet and mission, commander Melissa Lewis (Jessica Chastain) instructs her crew to board the escape ship. Only during their exit, Watney is hit by flying debris and presumed dead. Stuck between potentially saving one or killing everyone, Lewis takes off leaving Watney behind. The next day Watney awakes to the oxygen alarm in his helmet and quickly seeks refuge inside the artificial habitat. A habitat that would now be his home until a crew was able to travel back to rescue him. Anticipating he would have to stay alive for the better part of three years before any rescue attempt could take place, he begins to salvage whatever he can and come up with new ideas for survival. It was then this fight against time began for not only Watney, but for NASA and whoever had the best plan for getting back to him before it was too late, leading to a wild conclusion that will leave you speechless. 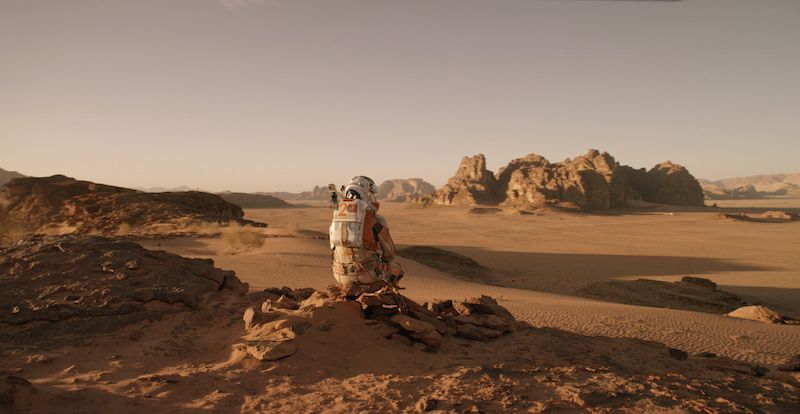 Acting up – For those that don’t know much about Matt Damon outside what he has done in the “Bourne” series, let me introduce you. This guy can flat out do whatever is asked on the big screen. You just have to get him to agree to the film, which for a director like Ridley Scott was the easy part. What came after was the task, which was making the audience believe and take this ride with Damon’s own Mark Watney.  One actor spending an inordinate amount of time by himself on screen is never that simple, but Damon made it look like it was. He was brilliant in every sense of the term proving he too can make survival intriguing like Tom Hanks once did in “Cast Away.” It was impressive and frankly a lot better than I imagined thanks to a script by Drew Goddard that never allowed Damon to get out of his comfort zone. That was big and needed given all the unknowns a typical science-fiction can throw at you. Being able to trust Damon with this story allowed Scott to fit the rest of the cast into whatever space was possible. And leading that charge was Jeff Daniels, playing NASA director Teddy Sanders. What a performance from a guy people love to say can only do comedy. Fact is, if you know Daniels and have watched him closely, he can be just as good at drama, making him almost an anomaly in Hollywood. After him, the cast was filled out nicely with the likes of Kristen Wiig, Michael Pena, Kate Mara, Sean Bean and Jessica Chastain.

Better with age? For those that think they know director Ridley Scott, I ask you to go back and watch “Blade Runner.” Then and only then can you appreciate the meticulous mind of a director that continues to improve at the tender age of 77. Sure he hasn’t put together the longest of resume’s, but you don’t have to when films like “Alien,” “Blade Runner,” “Thelma & Louise,” “Gladiator,” “Black Hawk Down” and “American Gangster” are listed.  That alone is a career when you figure combined, those films amount to 28 Academy Award nominations.  Well, you can go ahead and add “The Martian” to that list, as it should rake in at least eight nominations this upcoming Oscar season, if not more. That’s how good this was and for some odd reason, I was surprised. Maybe I forgot who was behind it or who was in it, but this film just really surprised me the longer I watched it. Forget about the story and acting for a minute and focus on the direction. Scott was able to make Mars come alive and with that, brought everyone into Mark Watney’s own personal hell. Whether it was the lighting or shots showing Damon simply talking to a small camera within the artificial pod, you believed it all. Seeing and living that drama made this film what it was, which is amazing because the special effects were nothing short of spectacular.  That’s balance and why Scott is a legend in my mind.

Bottom Line – “The Martian” is one of those films that looks like a retread, but who cares.  Truth is, it’s not and if you can’t trust me, trust Director Ridley Scott, because he is good at what he does. And here he manipulates a story about survival into one which reiterates the notion that “no one is ever alone.”