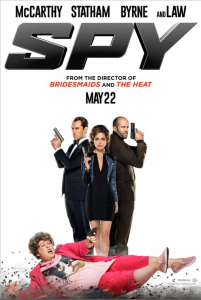 After last summer’s Tammy, Melissa McCarthy needed to get her comedy mojo back. Luckily, she partnered up with her Bridesmaids & The Heat Director Paul Feig. I went into the movie hoping all the funny parts weren’t what I had already seen in the trailers. There are actually tons of funny parts not in the trailer! Many of them would have been censored to even play in any newsfeed or on TV.

SPY is another example of how R-rated comedies can work. Perfect casting, great writing and enough of a plot where you don’t get bored. I wasn’t quite sure Jason Statham was going to work in a comedy, but because nailing the action star, he nails his comedic timing. Melissa McCarthy, Rose Byrne, Allison Janney and the rest of the cast are the reasons I expect people will like this movie. Jude Law was fine. I’m not a big fan of some of his recent work. Here is my list of the unexpected reasons SPY makes my list of movies to see this summer:

Feig has really proven himself to be a comedy powerhouse and this one will just add to his comedy hits collection. SPY has all the elements and the right cast for this to be the beginning of a great series of movies.