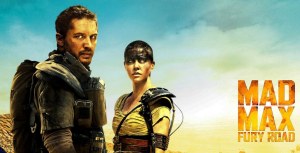 I was only two years old when the first Mad Max came out in theaters. I had seen it several years ago, but I watched it again before seeing the new movie. After seeing Fury Road, I can tell you, you don’t have to watch any of the previous movies to enjoy this latest installment.

All you really need to know is that Max (Tom Hardy) is “mad” due to everything he has survived in this dystopian world. His wife and child were killed and several of his friends. Throughout this movie, he is still dealing with those traumas. The movie is called Mad Max: Fury Road, but the movie should be called Furiosa: Fury Road. Furiosa (Charlize Theron) definitely has more lines than Max, who barely talks. He is bound for the first part of the movie, but it’s also because the crazy, fun ride starts almost immediately and the action is louder than any dialog.

Reasons why I recommend it:
1) I’ve never seen a movie world like it
2) The characters are so unique and bazaar
3) The gals in the movie kick just as much ass as the guys (something you hardly see)
4) The stunts were incredible! Hardly any CGI, practical effects
5) It’s under 2 hours!!!

Director George Miller has created a world I don’t want to live in, but I sure want to go back and visit at least a couple more times.